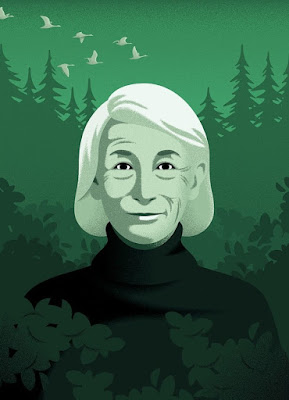 Much has been written about poet Mary Oliver in the week since her death last Thursday. 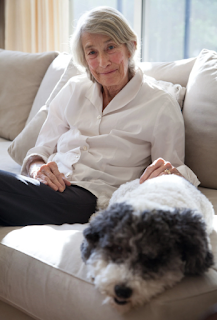 Described as "far and away, [America's] best-selling poet," Mary Oliver has been compared to Emily Dickinson, with whom she shared an affinity for solitude and inner monologues. Also, like Dickinson's poetry, Oliver's  combines dark introspection with joyous release.

The poetry of Mary Oliver is also known and celebrated for its clear and poignant observances of the natural world. Indeed, according to the 1983 Chronology of American Literature, one of Oliver's collection of poems, American Primitive, "presents a new kind of Romanticism that refuses to acknowledge boundaries between nature and the observing self."

Oliver's creativity was stirred by nature, and, as an avid walker, she often pursued inspiration on foot. Her poems are filled with imagery from her daily walks near her home in New England: shore birds, water snakes, the phases of the moon, and humpback whales. In Long Life, a collection of essays, she says, "[I] go off to my woods, my ponds, my sun-filled harbor, no more than a blue comma on the map of the world but, to me, the emblem of everything."

The numerous recent tributes to Oliver also acknowledge her 40+ year relationship with photographer Molly Malone Cook, who died of cancer in 2005. 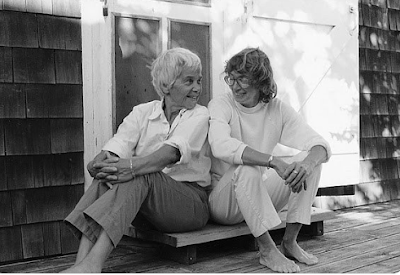 Above: Molly and Mary.

Oliver, writes Leighton-Dore, "was particularly beloved by members of the LGBTIQ+ community, who saw in her a queer woman unafraid to speak about life, love and loss."

Given my interest in the Pagan spiritual path, I was glad to recently discover Ruth Franklin's 2017 New Yorker article in which Oliver's deeply spiritual connection to the natural world is highlighted. Writes Franklin:

Part of the key to Oliver’s appeal is her accessibility: she writes blank verse in a conversational style, with no typographical gimmicks. But an equal part is that she offers her readers a spiritual release that they might not have realized they were looking for. Oliver is an ecstatic poet in the vein of her idols, who include Shelley, Keats, and Whitman. She tends to use nature as a springboard to the sacred, which is the beating heart of her work.

Of course, the idea of nature being a manifestation of – and thus a means of connection to – the sacred is at the heart of Pagan spirituality. As Thomas Moore observes, Pagans see "sacredness and depth everywhere."

And as I've noted previously, like people on other spiritual paths, those on the Pagan path seek, discern, and respond to the Divine Presence. Yet what is perhaps unique about Paganism is that it is a path that recognizes the Divine Presence in all things, though particularly in the natural world – the elements, the cycle of the seasons, and the inherent diversity of life. There is an elemental power and beauty in these natural realities and processes; a grounding power and beauty that transcends doctrine and dogma.

The Summer Day
by Mary Oliver
Who made the world?
Who made the swan, and the black bear?
Who made the grasshopper?
This grasshopper, I mean –
the one who has flung herself out of the grass,
the one who is eating sugar out of my hand,
who is moving her jaws back and forth instead of up and down –
who is gazing around with her enormous and complicated eyes.
Now she lifts her pale forearms and thoroughly washes her face.
Now she snaps her wings open, and floats away.
I don't know exactly what a prayer is.
I do know how to pay attention, how to fall down
into the grass, how to kneel in the grass,
how to be idle and blessed, how to stroll through the fields,
which is what I have been doing all day.
Tell me, what else should I have done?
Doesn't everything die at last, and too soon?
Tell me, what is it you plan to do
with your one wild and precious life? 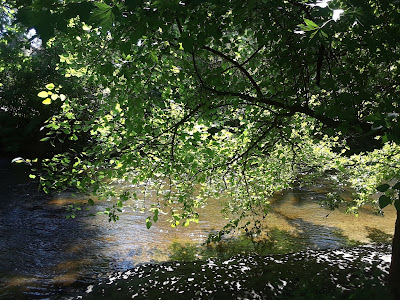 See also the previous Wild Reed posts:
• Quote of the Day – May 21, 2014
• Autumnal (and Rather Pagan) Thoughts on the Making of “All Things New”
• "Window, Mind, Thought, Air and Love"
• Dreaming of Spring
• "Thou Hast Thy Music Too"
• Meeting (and Embodying) the Lover God
• The Potential of Art and the Limits of Orthodoxy to Connect Us to the Sacred
• Love at Love's Brightest
• I Caught a Glimpse of a God . . .