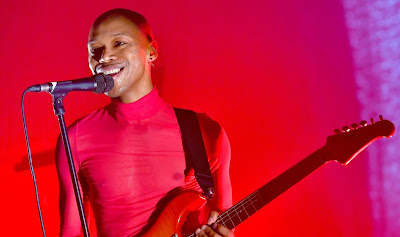 For “music night” this evening at The Wild Reed I share the video for South African singer-songwriter Nakhane’s new song, “New Brighton.” (You may recall that I spotlighted Nakhane and his “tortured journey to clarity,” around this time last year.)

“New Brighton” is very much a hymn to freedom, an ode to that “strange joy” of being in the world with open eyes, true to one’s self and one’s journey. It’s a theme that has become a hallmark of Nakhane’s music.

Following is how The Huffington Post's Curtis M. Wong describes the latest from Nakhane.

Boundary-smashing pop artist Nakhane draws on his inner struggles coming to terms with his authentic self in a haunting new video.

“New Brighton,” which dropped [last] Friday, sees Nakhane striking a number of dramatic poses in a pale pink suit and striking blue eyeshadow while strolling on a windswept beach and in the corridors of an abandoned mansion. As the song climaxes, he pledges to “never live in fear again.” 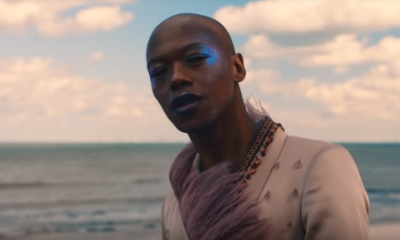 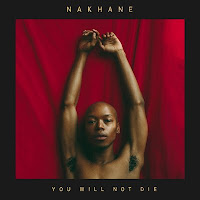 Featuring Anohni on backing vocals, “New Brighton” serves as a powerful introduction to Nakhane – already a household name in his native South Africa – for American audiences. The track is a standout on his debut album, You Will Not Die, due out February 22.

With just over a month to go before its stateside release, You Will Not Die is already riding a wave of advance buzz among music critics and fellow artists. The New York Times named Nakhane one of “10 artists to watch in 2019,” and British Vogue felt similarly, describing him as one of pop’s most influential new stars. 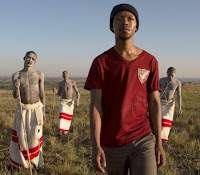 . . . If You Will Not Die succeeds in the U.S., Nakhane could have an impact on pop music well beyond critical raves. . . . Last year he starred as a closeted gay man in The Wound [right], a film that depicted a secret rite of passage into manhood observed by South Africa’s Xhosa people that includes circumcision. As a singer-songwriter, he has never shied away from exploring his queer identity through his music and performances, which is still unusual in mainstream pop. 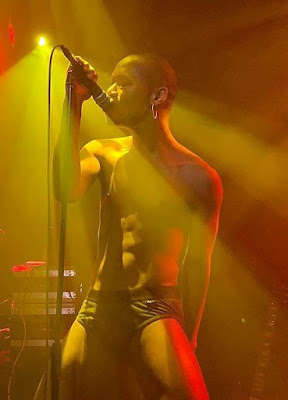 You Will Not Die was first released in South Africa, Europe, and elsewhere last March. I bought it as an import through Amazon.com. It’s become one of my favorite albums, with “Interloper” and “Presbyteria” being stand-out tracks for me. Interestingly, it doesn’t contain “New Brighton,” which is an addition to the U.S.-version of the album, one that is being marketed as “the deluxe version.” 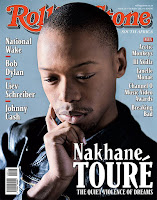 Also, You Will Not Die is Nakhane’s debut album only in certain parts of the world, including the U.S. As I note in my previous post on the singer, 2014’s Brave Confusion is Nakhane's first album, one that was released in South Africa under his full name, Nakhane Touré. The album, noted music critic Graham Gremore, couldn’t be more appropriately titled. “Here is a black Christian male singing love songs about other men in an environment that hasn’t exactly been welcoming towards gay people, wrote Gremore in Queerty. Upon its release in 2014, Brave Confusion caused such a stir that it ensured Nakhane made the cover of the South African Rolling Stone.

I slipped on the pebbles on the way to the gate
Held my balance on the cuff of your shirt
You were upset
We were going to the Port Elizabeth port
Up from the hill on due point was fragile to fault
I was upset:

Never knew them before, don’t know them now
What about my mother and her sisters?
Where was their name
I rose up, sing: 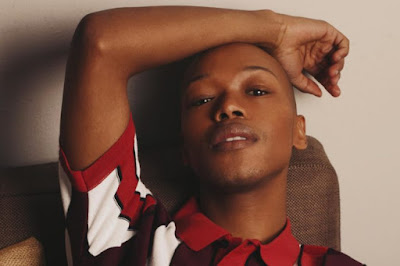