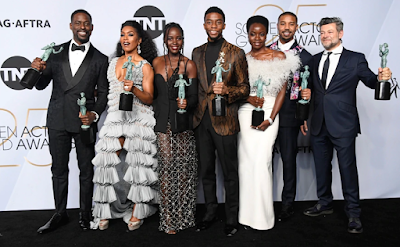 One [question we get asked] is, ‘Did we know that this movie was going to receive this kind of response?’ ... The second question is, ‘Has it changed the industry? Has it actually changed the way this industry works and how it sees us?’ My answer to that is to be young, gifted and black ― we all know what it’s like to be told there is not a place for you to be featured, yet you are young, gifted and black. We know what it’s like to be beneath and not above. That is what we went to work with every day because we knew ... that we had something special that we wanted to give the world. That we could be full humans beings in the roles that we were playing. That we could create a world that exemplified a world we wanted to see. We knew that we had something that we wanted to give.

Postscript: In his list of the "Top 10 Blockbuster Movies of 2018," writer and historian Matthew Rosza ranks Black Panther at #1. Here's what Rosza says about the film.

It's not even close: When ranking the blockbusters of 2018, Black Panther is in a category all by itself.

The challenge for any genre picture that aspires to greatness is that it must execute a paradoxical task: Excelling in its adherence to a formula while being about something more than the sum of its parts. Black Panther achieved both of these things. As a superhero movie, it creates a rich mythology around its titular protagonist Black Panther/T'Challa (Chadwick Boseman) and Wakanda, the fantastical African kingdom he rules as a benevolent monarch. The special effects are top notch, the dialogue is smart and the action set pieces are among the most skillfully executed of the year, surpassed only by those seen in Mission Impossible: Fallout. 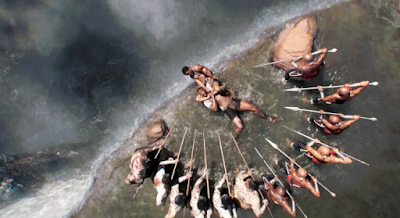 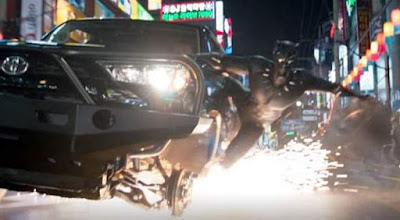 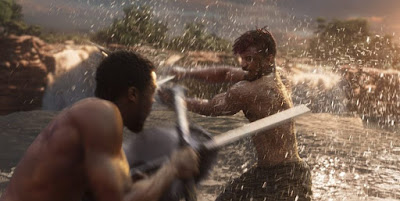 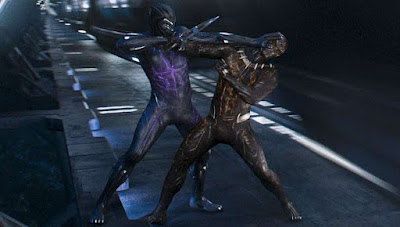 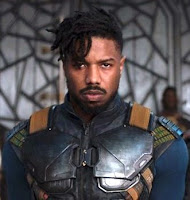 Yet Black Panther is more than your standard superhero movie, and the reason is simple: What director and co-writer Ryan Coogler, co-writer Joe Robert Cole and co-star Michael B. Jordan did with the character of N'Jadaka/Erik "Killmonger" Stevens [left]. He is an outspoken political radical, an ideological visionary whose outrage about racial, economic and political injustices prompts him to foment a revolution. His observations are more relevant to the real world than much of the bloviating you'll find on television, YouTube or message board comments sections, and the conflict between his militant idealism and Wakandan conservatism drives both the movie's plot and Killmonger's own Shakespearean lust for power. The political message carries an intelligence sorely lacking in equally ambitious superhero movies (such as Thanos' half-baked Malthusianism in Avengers: Infinity War). These qualities guarantee that long after other pop culture ephemera from 2018 has faded into obscurity, Black Panther will be remembered and re-watched.

In short, it is fitting that Black Panther was the highest grossing film in the United States this year. Indeed, it deserves to be regarded as one of the best movies of the year. If the Oscars fail to recognize this, they will provide their critics with a powerful exhibit in the case against the Academy's own cultural relevance.

Since Rosza wrote these words the Academy of Motion Picture Arts and Sciences has recognized the merits and significance of Black Panther. The film has been nominated for seven Academy Awards, including Best Picture, Best Costume Design, Best Production Design, Best Original Score, Best Original Song (for "All the Stars"), Best Sound Editing, and Best Sound Mixing. The film was the first superhero film ever to be nominated for Best Picture. 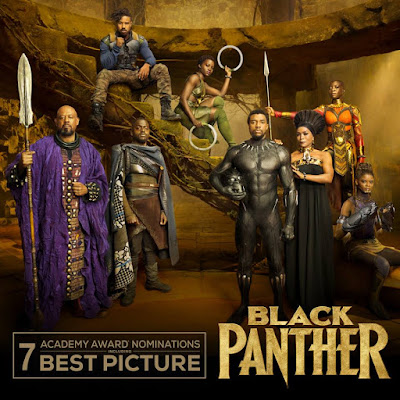 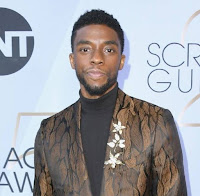 For more on Black Panther at The Wild Reed, see:
• The Important Cultural Moment That Is Black Panther
• Celebrating Black Panther – Then and Now
• "Avengers Assemble!"
• Jason Johnson on Stan Lee's Revolutionary Legacy
• Another First for Black Panther