To Whom the Future of America Belongs 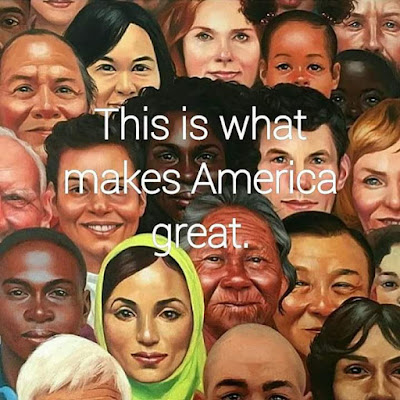 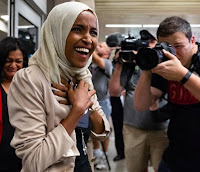 I would have liked to have been out at the Minneapolis-Saint Paul Airport earlier today to show my support for Rep. Ilhan Omar as she returned to Minnesota from Washington D.C. (left).

Here's how Minnesota Public Radio's Cody Nelson reported on Omar's arrival and the recent controversy around President Trump's racist and incendiary comments directed towards her and three other women of color in the U.S. congress.

Rep. Ilhan Omar met a warm welcome in her home state Thursday, as a crowd of supporters greeted the Minneapolis Democrat at the airport following days of racist remarks that President Trump and his supporters directed at Omar and three other congresswomen. 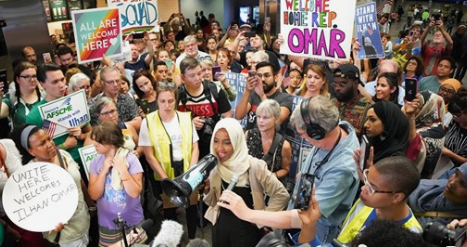 Omar will moderate a town hall in south Minneapolis on health care tonight with U.S. Rep. Pramila Jayapal, a Democrat who represents Seattle.

Trump tweeted Sunday that four progressive women in Congress should “go back and help fix the totally broken and crime infested places from which they came.” The tweet is widely thought to refer to Omar and other Democratic Reps. Alexandria Ocasio-Cortez, Rashida Tlaib and Ayanna Pressley. [Three of the four were actually born in the U.S.] Later, Trump singled out Omar in an impromptu exchange with media at a White House event.

On Wednesday night, Trump made false claims about the Minnesota congresswoman at a rally in North Carolina, inaccurately suggesting she was an al-Qaeda sympathizer. The president’s speech inspired the Greenville, N.C., crowd to begin chanting “send her back,” referring to Omar — a U.S. citizen who immigrated from Somalia as a child refugee. 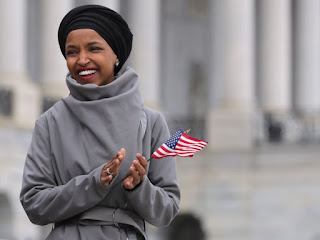 Ilhan Omar's comments at the airport today remind me of a recent op-ed by Moustafa Bayoumi, who writes that “lurking behind the statement 'go back to where you come from' is the clenched fist of a privileged but frightened group . . . the future belongs to a multicultural, multiracial, and multifaith America.”

Following, with added images and links, is Bayoumi's op-ed in its entirety.

This Is What Today's America Looks Like.
The Squad Is Us 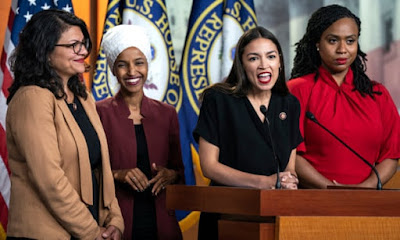 On Monday, the best of the United States of America was on full display. 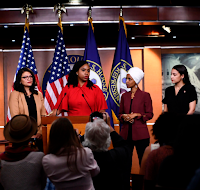 In a moving press conference in Washington, DC, the four progressive congresswomen now known the world over as “the squad” – Ayanna Pressley, Ilhan Omar, Alexandria Ocasio-Cortez and Rashid Tlaib – proclaimed their profound support for each other after enduring blatantly racist abuse by Donald Trump. And they did more. They redoubled their commitments to improving the lives of all the people in this country.

It was a remarkable moment, an urgently needed example of what leadership – real leadership, leadership that is principled, intelligent, courageous, and resolute – looks like. I hope Nancy Pelosi was watching.

What I saw at this press conference was an inspiring tableau of today’s America, four women of color offering moral and political guidance to a nation that is being goaded by its commander-in-chief to embrace the schoolyard taunts of a wanton bigot.

Not that much prodding has ever been needed to activate racism in this country. If your skin is any darker than the peel of a honeydew melon, if your eyes have ever been compared to the shape of almonds, if your name has been called unpronounceable and changed without your consent, if you’re constantly asked “but where are you from from,” if you’ve been complimented for being different than the rest of them, if your faith elicits unsolicited political commentary, if people always seem to want to touch your hair, then chances are you’ve also been told, at many times in your life, that you should go back to where you came from.

I, for one, have been frequently told this all my life, and it happens most often now in hate mail and missives that regularly land in my inbox. In my case, the insult routinely borders on the comical. Never quite sure where they should be sending me back to, my detractors will dutifully resort to some internet research, only to discover that I was born in Switzerland. Somehow, “Go back to Switzerland!” just doesn’t carry the menace that they seem to think it has.

We can laugh at the racism of fools, but every person of color in this country will also recognize the simmering violence behind these (and similar) statements. To be told to “go back to where you came from” is to be told not only that you don’t belong, but that you have no say in what the standards of belonging should be in the first place.

Lurking behind the statement “go back to where you come from” is the clenched fist of a privileged but frightened group, one that is dreadfully afraid of listening to “those ignored, left out, and left behind,” as Ayanna Pressley put it on Monday. Merely listening, they believe, will weaken their traditional hold on power. All around them they see a fabled version of the old America slipping inexorably away.

But the old America that they dream of never was and never will be. All the attempts by this administration to turn back the clock of change – from adding a citizenship question to the census, to distorting the rules on asylum, to wrenching families apart with Dickensian cruelty, to barring Muslims from entering the country – will ultimately fail to produce the America they desperately desire.

On the contrary, the future belongs to a multicultural, multiracial, and multifaith America, and watching the four congresswomen of “the squad” on Monday only confirms this fact. “Our squad is big,” Pressley stated. “Our squad includes any person committed to building a more equitable and just world. And that is the work we want to get back to. Given the size of this squad and this great nation, we cannot, we will not be silenced.”

She’s right. I have seen the squad. The squad is us. 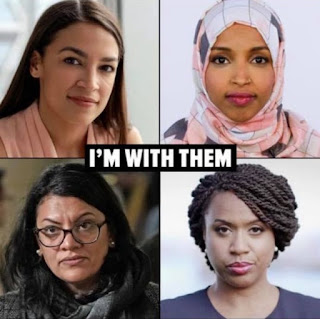 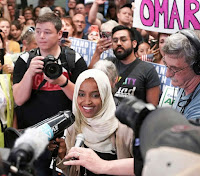 
See also the previous Wild Reed posts:
• Progressive Perspectives on the Ilhan Omar “Controversy”
• Ilhan Omar on The Daily Show
• Quote of the Day – February 11, 2019
• On International Human Rights Day, Saying "No" to Donald Trump and His Fascist Agenda
• 2000+ Take to the Streets of Minneapolis to Express Solidarity with Immigrants and Refugees
• In Charlottesville, the Face of Terrorism In the U.S.
• Trump's America: Normalized White Supremacy and a Rising Tide of Racist Violence