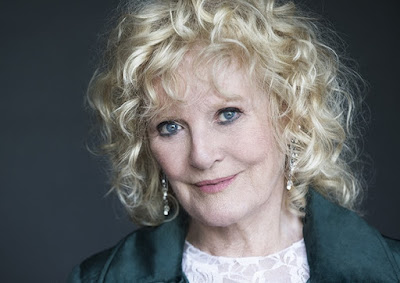 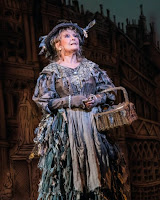 It's the 87th birthday today of Petula Clark, the English singer, actress and composer whose career has spanned eight decades.

And she's still going strong, as evidenced by two recent albums (2017's Living for Today and 2018's Vu d'ici) and by the fact that she's currently appearing in London's West End as The Bird Woman (left) in the revival of the iconic musical Mary Poppins. While one reviewer quips that she "strik[es] a blow for ongoing vitality," Quentin Letts, writing in the November 17 edition of the Sunday Times, offers a more substantive appraisal of Petula's presence in Mary Poppins.

Petula Clark is back on the West End stage. She has been singing professionally since 1942, when she managed to take an audience's mind off one of Hermann Göring's air raids. Now she is playing the Bird Woman in a revival of Richard Eyre's Mary Poppins.

Her photograph in the programme is a triumph of soft focus and makes her look about 50. As for the voice that once belted out “Downtown,” it has dropped a bit – the opening note of her one song, “Feed the Birds,” is almost baritone – but still casts a spell. 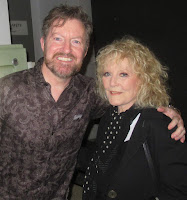 As you may recall, I had the honor and pleasure of seeing Petula in concert when I was in Australia earlier this year (right). I even briefly meet and talked with her after the show. How lucky was I?

Anyway, in celebration of Petula's birthday, I share this evening "Sincerely," one of my favorite tracks from Living for Today.

Related Off-site Links:
Petula Clark Interview: "I Felt as Though I Belonged to Other People – Not Myself" – Dominic Cavendish (The Telegraph, November 1, 2019).
PetulaClark.net – The Official Website of Petula Clark.