A Thank You Letter to Marianne Williamson 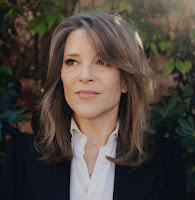 The following letter is written by Musashi Takazawa, a member of the Facebook group, Marianne Williamson 2020 Official Citizen Campaign Headquarters. It was first published via Facebook on January 13, three days after Marianne suspended her campaign to be the Democratic presidential nominee.

To mind my (and heart), Musashi does a beautiful job in encapsulating why so many people, myself included, where drawn to and will forever value and appreciate Marianne's presidential campaign.

I just wanted to reach out to you and say, “Congratulations” on your heroic and historic campaign! I'm heartbroken that your presidential marathon has come to an end – I desperately wanted you to be our “Mother in the White House.” Regardless of the result, you will always be my President! I cannot even begin to imagine what you must be experiencing in the aftermath of your exhilarating, but brutal campaign. You're in my thoughts and prayers. Please take some serious time off to process, rest, and rejuvenate your mind, body, and soul – you deserve it!

Thank you from the depths of my heart for courageously stepping up as a conscious Samaritan and patriot to save our nation at a time of crisis! I will treasure the wisdom, courage, compassion, and leadership you exemplified throughout your campaign. It’s a pity and travesty that majority of the people did not get to hear your true message thanks to the nefarious influence of the political-media industrial complex. However, please be rest assured that you have made an indelible impact on millions of Americans, including myself. And many more will go on to awaken to your message – generations to come will surely recognize and celebrate your trailblazing campaign.

Through your campaign, you became the spokesperson for the conscience of America. You made love, simple truths, and humanitarian principles matter in politics instead of just the economic bottom line. You spoke out against forces that made a mockery of love. You went deep beyond the superficial symptoms to address root causes of issues at the moral, spiritual, and psychological level. You are one of a kind in American politics – no other candidate talks about rescuing the hungry, traumatized children of America; waging peace; reparations for racial reconciliation; universal integrative healthcare; fighting poverty and our sociopathic economic system; and many other things that matter.

Most importantly, you became the siren to awaken us from our slumber, apathy, and cynicism in order to rebirth our responsibility as citizens of the United States. You reminded us about our nation’s history and mission statement; the proud, but tainted legacy of our ancestors; and the power of We The People. You inspired us to heed the small still voice within us and become the better angels of our nature. You empowered us to step in for the sake of country and planet to repudiate corporate aristocracy – just as many generations before us did. You have sowed your seeds of love and laid the ground for us to become the immune cells of our Democracy. I thank you for these precious gifts!

You have always declared that your campaign wasn’t just a campaign to get you elected as President, but to usher a movement of an uprising of people in order to co-create a better America, and in turn, a better world. That uprising has blossomed in our heads and in our hearts. Now, we must act anew to carry on the movement for a Politics of Love that you started – so we can repair America. After you’re back from your much-needed rest, I sincerely hope you will consider leading us in the next phase of this movement, not as a presidential candidate, but as a spiritual leader and activist in the same vein as a Gandhi or MLK – for Love has much unfinished business to tend to before Love can prevail. We're ready for the next step!

Thank you again for your bold and daring run! We salute you for your tireless service and sacrifice on behalf of our beloved nation! 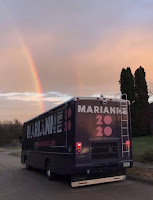