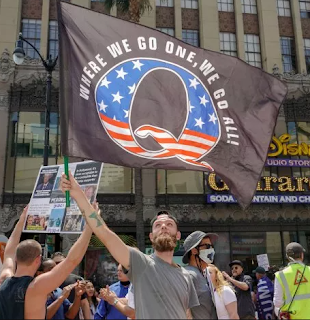 The QAnon conspiracy theory and its growing influence in some spheres of American political life has recently been in the news here in Minnesota.

Last Tuesday the Star Tribune reported that six Republican-endorsed candidates for the Minnesota legislature have expressed support for QAnon online.

QAnon is a far-right conspiracy theory alleging that a cabal of Satan-worshiping pedophiles is running a global child sex-trafficking ring and plotting against President Donald Trump. In leading the battle against this cabal, the conspiracy purports, Trump is leading the country to a “day of reckoning,” one which will involve the mass arrest of journalists and politicians. Despite no part of the theory being based on fact, many people, including Trump, have embraced it.

QAnon has been likened to a virtual cult and has been labeled a potential domestic terrorist threat by the FBI.

One of the best rebuttals to and analyses of QAnon that I've come across is by author, activist, and former Democratic presidential candidate Marianne Williamson. Following is an excerpt from Marianne's August 26, 2020 Newsweek op-ed, “America’s Cults of Madness.”

Cults like QAnon are not simply a political issue; first and foremost, they are a psychological issue. In truth, whole civilizations have been seized by bouts of collective psychosis throughout history. The Inquisition, the Holocaust and the Rwandan genocide are prime examples. Although those horrific phenomena came to an end, the underlying forces from which they emerged have not been expunged from human consciousness. In fact, part of the problem is that, with the characteristic arrogance of the modern materialistic mind, too many have thought our civilization too “evolved” to have to worry about such things. Surely we're too advanced to fall collectively for mental madness, as long as rational thinking prevails. Oh, really? Are not some chinks in the armor beginning to appear?

Centuries ago, long before the birth of Sigmund Freud, mental health and mental dysfunction existed just as they do now. Yet our forebears didn't have psychological jargon with which to describe such inner realities; they simply called them angels and demons, both of which they saw as elements of the soul. Our political establishment has laughed off such notions with a psychological naïveté masquerading as intellectual sophistication. Yet our failure to deeply understand something doesn't mean that that something does not exist.

America's cults of madness are opportunistic infections, collective dysfunctions that have resulted from the sickness of our nation's psyche, or soul. But health is not an absence of sickness so much as sickness is an absence of health. To say our nation's soul needs healing is absolutely true, but it's not going to happen without a deeper understanding of what it means. The reason our nation's soul is sick is because it hasn't been healthy for a while. America doesn't just have a pandemic, a broken economy or a tyrannical president to deal with. We have a collective mental health issue that is hiding in plain sight.

A healthy soul is characterized by happiness, generosity toward self and others, expanded compassion, creativity and life-giving productivity. For those who wish to see ourselves and our fellow citizens living those words, and our society blessed and maintained by their existence, it's time to ask ourselves with brutal honesty: Is America organized politically, socially or economically to align with any of those things? Are the psychological principles that guide our nation's policies the stuff of a healthy soul? It is not enough to be reasonable. Reason disconnected from values can produce unreasonable results.

The same psychological principles that prevail within an individual's life prevail within the life of a nation. As ancients knew, matters of the psyche are matters of the soul, and a nation, just like an individual, has one. Chronic suffering is damaging to the soul, regardless where it came from. Numerous factors – despair, anxiety and fear experienced by millions of people on a regular basis as the direct and indirect results of our loveless, amoral economic organizing principles – have so destroyed our country's psychic immune system as to make opportunistic infections, such as cults of madness, simply to be expected.

Such things as QAnon, Nazism and cult followings of a nationalistic leader are hydra that cannot simply be cast away by our rationalistic notions of problem solving. Having had its head cut off, it is the very nature of a hydra to simply grow another two.

Only when we decide as a society to actively align our policies with the tenets of a healthy soul – putting kindness, love, mercy and compassion over cutthroat attitudes that put glorification of self over a commitment to the love that binds us as one, not only in our private behavior but in our political and economic behavior as well – will our wounded soul begin to heal itself. The truest thing that can be said about America's soul right now is that we have sold it. Our government has sold its soul. American capitalism has sold its soul. The false god of short-term corporate profit, feeding off the legitimization of greed and the financialization of almost every single thing, has made a petri dish of us, out of which has emerged the symptoms of our national sickness.

Yet the symptoms alone are not the deeper problem. It is their cause – our idolization of the things of the world over the things of spirit, our deference to money before our deference to love, our lack of reverence and the de-sacralization of nature – that has compromised our immune system and now threatens to destroy us. Each of us has a role to play in the healing of our nation's soul, from increasing our capacity for kindness, to committing to the collective and political changes that will realign our nation with the angels of our better nature. Until and unless we do so, the manifestations of collective fear will continue to grow and will possibly overwhelm us. The only real remedy is an awakening of the heart and the manifestations of collective love.