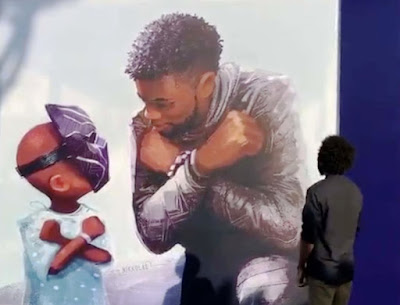 It’s been a month since news broke of actor Chadwick Boseman’s death at age 43 from colon cancer. Unbeknown to all but his family and medical team, Boseman had been living with the disease for the past four years. 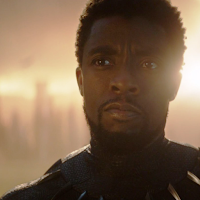 I must admit I can still find myself experiencing a catch in my spirit whenever I am reminded that he is gone from this world; when I realize that apart from his posthumous appearance in the soon-to-be-released Ma Rainey's Black Bottom, we won’t see him again in a new movie. And most incredulously, we will never see him again in the role with which he will forever be celebrated, that of King T’Challa of Wakanda, aka Black Panther.

I’ve been giving some thought as to why Boseman’s death has had such an impact on me. I think a big part of it is that I’d developed a deep admiration for him as both an actor and a human being. He was a very humble, thoughtful, and caring man. I also resonate with both the story and the queer appeal of Black Panther, the film that made Boseman an international star. 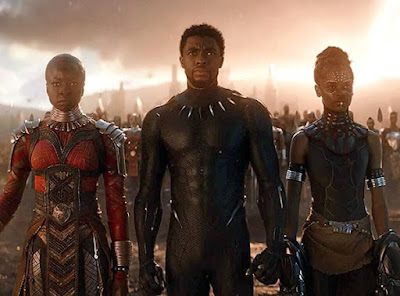 In the weeks since his passing, all kinds of tributes and memorials have been made and created honoring Chadwick Boseman as both an accomplished actor and a generous and compassionate human being. 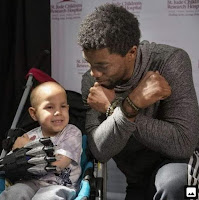 For instance, the image that opens this post depicts a recently unveiled mural in Disneyland that celebrates Boseman and the way he would visit and interact with children living with serious, often terminal illnesses – even as he himself privately struggled with cancer.

Boseman made a real difference in the lives of these children and their families, as numerous photos show (right and below) and family members themselves attest. 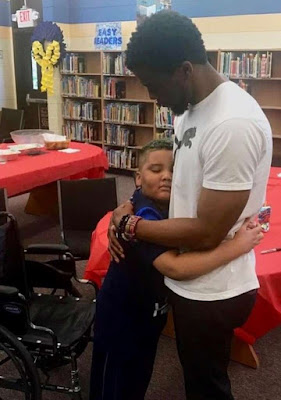 He truly was a living icon, which is to say that his life served as a window into the deeper meaning of why it is we're here.

To be an icon is to also choose to live in such a way that one’s life and example serve as a trail marker or guidepost for all who are longing to embark on any type of journey of transformation – their own and the world’s. In his all too brief life, Chadwick Boseman chose to work to become the hero of his own story, his own journey. And in doing so, he inspired others to become the hero of theirs. 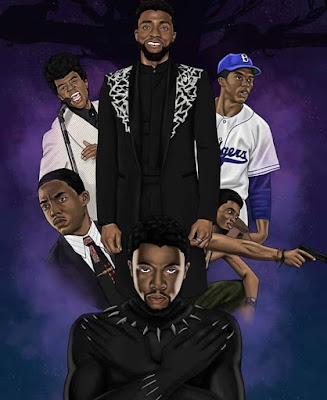 In a tragically brief but historically sweeping life as an actor, Boseman played men of public life and private pain. Before [news broke of his death], we didn’t know he, too, was bearing such a burden. That has only magnified his accomplishment, bringing him closer to the great figures whose shoes he wore on film. He played men who advanced a people’s progress, a trail he helped blaze himself. He played icons, and died one, too. 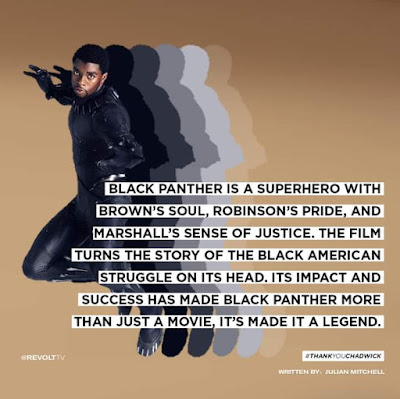 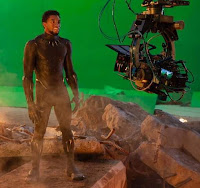 Each time [Chadwick] stepped on-set, he radiated charisma and joy, and each time he appeared onscreen, he created something truly indelible. He embodied a lot of amazing people in his work, and nobody was better at bringing great men to life. He was as smart and kind and powerful and strong as any person he portrayed.

I always marveled at how special Chadwick was. Such a pure hearted, profoundly generous, regal, fun guy. My entire job as Okoye [in Black Panther] was to respect and protect a king. Honor his leadership. Chadwick made that job profoundly easy. He was the epitome of kindness, elegance, diligence and grace. On many an occasion I would think how thankful I was that he was the leading man I was working closely with. A true class act. And so perfectly equipped to take on the responsibility of leading the franchise that changed everything for Black representation.

He made everyone feel loved, heard and seen. He played great, iconic roles because he possessed inside of himself that connection to greatness to be able to so richly bring them to life. He had a heroic spirit, and marched to the beat of his own drum; hence his excellence as an artist and the incredible courage and determination as he faced life’s challenges; while still guiding us all. 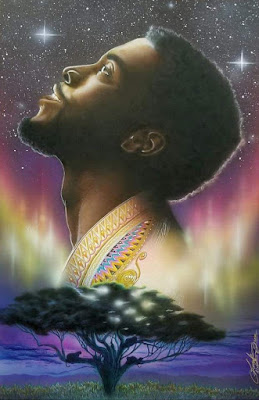 Sometimes it’s the small things that let you know the character of a person. There have been two times that I’ve been out in public where [Chadwick went] out of his way to say hello. This is after the major success of Black Panther. One of them was at the airport. I was coming in, he was coming out. Another time, we were literally on the street. He was just always sending love and sending vibes and checking in on you. I’m like, there must be 10,000 people in your life every day, but you would still take time to reach out to people and to connect with them.

– Aakomon Jones
Quoted in Matthew Jacobs's article,
“How Chadwick Boseman’s Humility Made Him A Star”
The Huffington Post
September 2, 2020 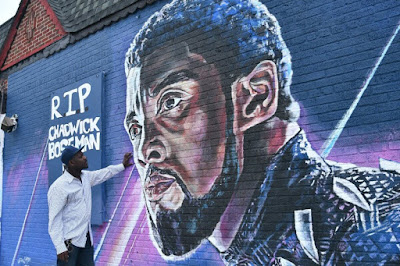 Above: Brooklyn artist Kenny Altidor stands alongside his latest mural, one dedicated to Chadwick Boseman. According to the Brooklyn Paper, the mural, on the wall of Family Altagracia Caribbean Crusine on Clarendon Road and East 56th St., East Flatbush, gained wide praise from the community. (Photo: Lloyd Mitchell) 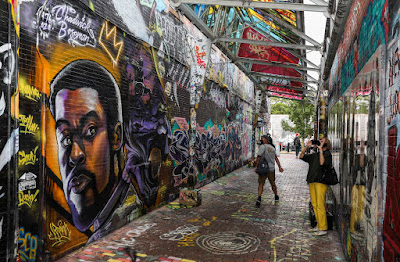 I thought back to all his performance and all those incredible people he’s played, and I realized I don’t think you can do it as convincingly as he did if he did not possess that same grace in real life. You can’t act that. 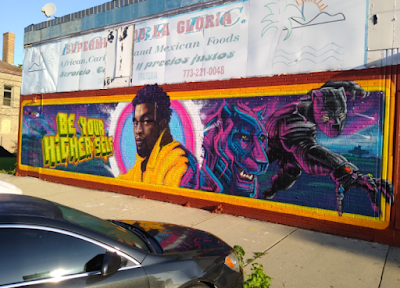 Above: The “Be Your Higher Self / Chadwick Boseman / Black Panther” mural by Rahmaan Statik, located at 89th and Commercial SE in Chicago IL. (Photo: Rahmaan Statik)

Murals dedicated to Chadwick Boseman have not only appeared in cities across the U.S., including Nashville and Dallas, but have also been created across the globe – in Brazil and the United Kingdom, for instance. 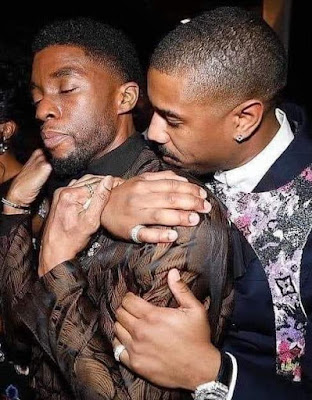 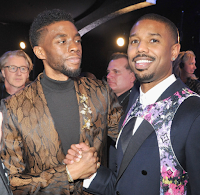 One of the last times we spoke, you said we were forever linked, and now the truth of that means more to me than ever. since nearly the beginning of my career, starting with All My Children when I was 16 years old [taking over a role from Boseman], you paved the way for me. You showed me how to be better, honor purpose and create legacy. . . . Everything you’ve given the world – the legends and heros that you’ve shown us we are – will live on forever. But the thing that hurts the most is that I now understand how much of a legend and hero YOU are. Through it all, you never lost sight of what you loved most. You cared about your family, your friends, your craft, your spirit. You cared about the kids, the community, our culture and humanity. You cared about me. You are my big brother, but I never fully got a chance to tell you or truly give you your flowers while you were here. I wish we had more time. 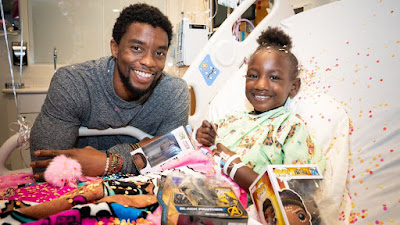 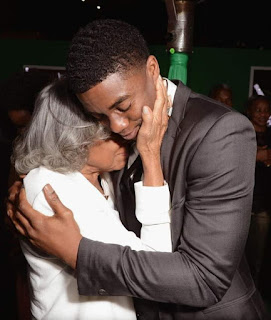 Above: Chadwick with Rachel Robinson, the widow of baseball legend Jackie Robinson, whom he portrayed in the 2013 film 42. 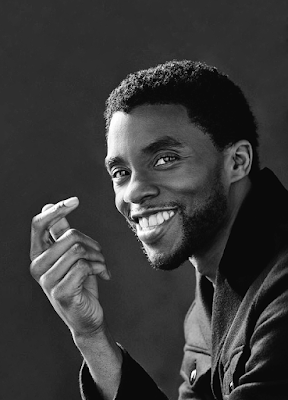 He brought grace, elegance and power to everything he did. He always seemed to carry our ancestors with him. And now he joins them far too soon. 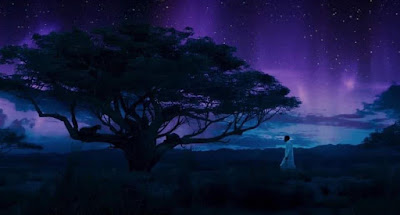 NEXT: Chadwick Boseman’s Timeless Message to
Young Voters: “You Can Turn Our Nation Around”