Heather Cox Richardson on the 4th Anniversary of the “Unite the Right” Rally in Charlotteville, VA 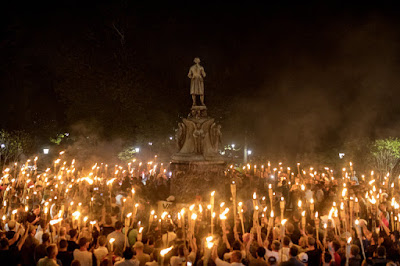 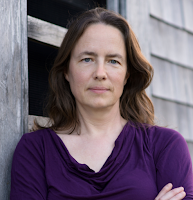 Heather Cox Richardson is a political historian and the author of How the South Won the Civil War: Oligarchy, Democracy, and the Continuing Fight for the Soul of America. She also regularly posts a dispatch on her Facebook page in which she “uses facts and history to make observations about contemporary American politics.”

In her dispatch of last Wednesday (August 11, 2021), Heather takes a look back at one of the bleakest and most shameful events of modern American history – the “Unite the Right” rally in Charlotteville, Virginia. In doing so she explores the “larger context of the Charlottesville riot” and shows how the dangerous energy of that riot continues to live on in neo-fascist events and sentiments across the country. It makes for disturbing yet absolutely essential reading. 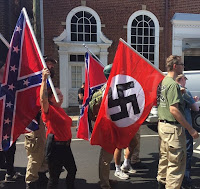 Four years ago today, racists, anti-semites, white nationalists, Ku Klux Klan members, neo-Nazis, and other alt-right groups met in Charlottesville, Virginia, to “Unite the Right.” The man who organized the rally, Jason Kessler, claimed he wanted to bring people together to protest the removal of a statue of Confederate general Robert E. Lee from a local park. But the rioters turned immediately to chants that had been used by the Nazis in Germany in the 1930s: “you will not replace us,” “Jews will not replace us,” and “blood and soil.” They gave Nazi salutes and carried Nazi insignia, and many brought battle gear and went looking for fights. By the end of August 12, they had killed counterprotester Heather Heyer and had injured 19 others. After the governor of Virginia declared a state of emergency, the rioters went home.

The Unite the Right rally drew a clear political line in America. Then-president Donald Trump refused to condemn the rioters, telling a reporter that there were “very fine people, on both sides.”

In contrast, former vice president Joe Biden watched the events at Charlottesville and concluded that the soul of the nation was at stake. He decided to run for president and to defeat the man he believed threatened our democracy. Biden was especially concerned with Trump’s praise for the “very fine people” aligned with the rioters. “With those words, the president of the United States assigned a moral equivalence between those spreading hate and those with the courage to stand against it,” Biden said, “and in that moment, I knew the threat to this nation was unlike any I had ever seen in my lifetime.”

Four years later, it is much easier to see the larger context of the Charlottesville riot. The political threat of those gangs who tried to unite in Charlottesville in 2017 recalls how fascism came to America in the 1930s: not as an elite ideology, but as a unification of street brawlers to undermine the nation’s democratic government.

In 2018, historian Joseph Fronczak explored the arrival of fascism in the U.S. In an article in the leading journal of the historical profession, the Journal of American History, Fronczak explained how men interested in overturning Democrat Franklin Delano Roosevelt’s presidency in 1934 admired and then imitated the violent right-wing gangs that helped overturn European governments and install right-wing dictators.

The United States had always had radical street mobs, from anti-Catholic gangs in the 1830s to Ku Klux Klan chapters in the 1860s to anti-union thugs in the 1880s. In the 1930s, though, those eager to get rid of FDR brought those street fighters together as a political force to overthrow the federal government.

While they failed to do so in an attempted 1934 coup, Fronczak explains, street fighters learned about the contours of fascism once their power as a violent street force was established. He argues that in the U.S., fascism grew out of political violence, not the other way around. Mobs whose members dressed in similar shirts, waved similar flags, and made similar salutes pieced together racist, anti-semitic, and nationalistic ideas and became the popular arm of right-wing leaders. In America, the hallmark of budding fascism was populist street violence, rather than an elite philosophy of government.

The Unite the Right rally in Charlottesville had the hallmarks of such a populist movement. Leaders brought together different gangs, dressed similarly and carrying the emblem of tiki torches, to organize and attack the government. Rather than rejecting the rioters, then-President Trump encouraged them.

From that point on, Trump seemed eager to ride a wave of violent populism into authoritarianism. He stoked populist anger over state shutdowns during coronavirus, telling supporters to “LIBERATE MINNESOTA,” “LIBERATE MICHIGAN,” and “LIBERATE VIRGINIA, and save your great 2nd Amendment. It is under siege!” His encouragement fed the attacks on the Michigan state house in 2020. And then, after he repeatedly told his supporters the 2020 presidential election had been stolen, violent gangs attacked the U.S. Capitol on January 6, 2021, in an attempt to overturn the government and install him as president for another term.

While that attempted coup was unsuccessful, the empowerment of violent gangs as central political actors is stronger than ever. Since January 6, angry mobs have driven election officials out of office in fear for their safety. In increasingly angry protests, they have threatened school board members over transgender rights and over teaching Critical Race Theory, a legal theory from the 1970s that is not, in fact, in the general K–12 curriculum.

Now, as the coronavirus rages again, they are showing exactly how this process works as they threaten local officials who are following the guidelines issued by the Centers for Disease Control and Prevention to require masks. Although a Morning Consult poll shows that 69% of Americans want a return to mask mandates, vocal mobs who oppose masking are dominating public spaces and forcing officials to give in to their demands.

In Franklin, Tennessee, yesterday, anti-mask mobs threatened doctors and nurses asking the local school board to reinstate a mask mandate in the schools. “We will find you,” they shouted at a man leaving the meeting. “We know who you are.”

See also the previous Wild Reed posts:
• In Charlottesville, the Face of Terrorism In the U.S.
• Trump’s America: Normalized White Supremacy and a Rising Tide of Racist Violence
• “Can the Klan!”
• Rep. Ilhan Omar Responds to President Trump’s Authoritarian Threats
• Marianne Williamson on America’s “Cults of Madness”
• “The Republican Party Has Now Made It Official: They Are a Cult”
• “We Have an Emergency On Our Hands”: Marianne Williamson On the “Freefall” of American Democracy
• “Fascism Is Upon Us”
• President Trump, “We Hold You Responsible”
• Insurrection at the United States Capitol
• Dan Rather on America’s “Moment of Reckoning”