Nina Turner: “A Candidate Who Can Make An Enormous Difference” 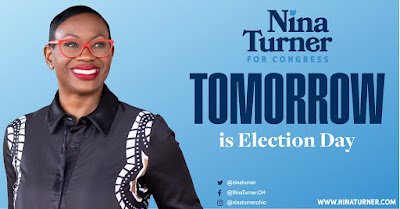 Tomorrow, Tuesday, August 3, is a big day for Democrats in Ohio's 11th congressional district . . . and indeed all around the country.

Why? Well, tomorrow is the special primary election for the seat formerly occupied by Marcia Fudge. In a field of 13 candidates, the two front-runners are the progressive Nina Turner, a former state senator, and the centrist Shontel Brown, the Chair of the Cuyahoga County Democratic Party.

Turner has paced the field of candidates in both fundraising and endorsements – including that of outgoing Cleveland Mayor Frank Jackson and a bevy of national progressive voices – since Marcia Fudge vacated the seat when appointed as HUD Secretary. But Brown, with her local party backing [and an endorsement from Hillary Clinton], was assumed to be a top challenger.

. . . “Working people in Northeast Ohio and across this nation deserve a leader who will center the needs of the poor, the working poor, and the barely middle class” she said in a statement. “I am proud to be known as a leader who will partner with anyone who puts the interest of the people first, has the courage to ask for more and the unique ability to build a broad coalition to get things done on their behalf.”

Writing in In These Times, Nuala Bishari offers an overview of the support Turner is receiving at the national level.

“I’m looking to have her seated next to me, fighting this fight,” Bush said at a February fundraiser. “We need somebody like Sen. Nina Turner who is unapologetic, who is unbossed, who is not ashamed and not afraid of her progressive values.” 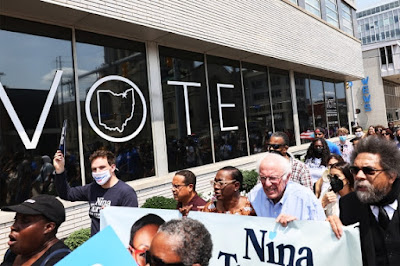 You may recall how in the lead-up to the 2020 presidential election I spent much of the summer researching, promoting, and supporting down-ballot progressive Democratic candidates. I’ve started doing a similar thing in preparation for next year’s congressional mid-term elections. (See, for example, here.)

Interestingly (and disappointingly) we often know who the progressive candidates are not only by their platforms (Turner, for instance, supports a $15 minimum wage, recurring stimulus checks, and free public college, among other things) but by the push-back (some of it quite nasty) they often receive from centrist Democrats who all too often benefit from the economic status quo that progressives are dedicated to disrupting and transforming. Sadly, but not surprisingly, Nina has received such push-back.

Like the 2020 race here in Minnesota between progressive incumbent Ilhan Omar and centrist challenger Antone Melton-Meaux, the race between Nina Turner and the Democratic establishment-supported Shontel Brown exposes the deep and long-standing (though often papered-over) divide between liberals and progressives; or, said another way, between moderates or centrists pushing for incremental tweaks to the system and those insisting on much more immediate and bolder structural transformation. Of course, both types of change have their place, but I believe we are living in a time when the multi-faceted crisis we’re facing definitely calls for the latter. 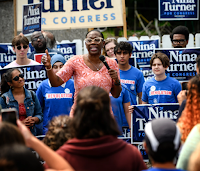 I made a financial contribution this evening to Nina’s campaign, and I invite you to consider doing the same. It’s easy! Just click here to visit her official campaign site and then click on the “Donate” button. Her site provides a detailed overview of her platform, including “Reimaging Public Safety,” “Medicare for All,” “Economic Justice,” “Housing as a Human Right,” and “Environmental Justice.” There’s also a great “Meet Nina” section in which her inspiring personal and political story is shared.

Two weeks ago, Nina was interviewed via Zoom by author, activist, and former Democratic presidential candidate Marianne Williamson. As Marianne says, Nina Turner is “a candidate who can make an enormous difference.” If you have 40 minutes to spare, I encourage you to check out this interview as it’s a very informative and insightful conversation between two of the country’s most inspiring progressives. 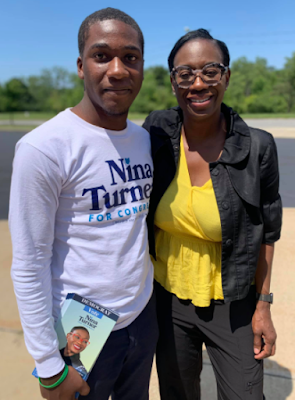 Above: Nina Turner with Elijah Manley, one of the
progressive candidates I supported last summer.