This time last year I had the following commentary published in the Minneapolis Star Tribune .

I must confess that I didn't appreciate the title the paper gave my commentary (see below), preferring instead my original title, "Vatican Stance on Gay Priests Signals Urgent Need for Renewal and Reform".

I should also acknowledge that the cartoon below which accompanied the publication of my commentary in the Star Tribune, was first published in the Washington Post. 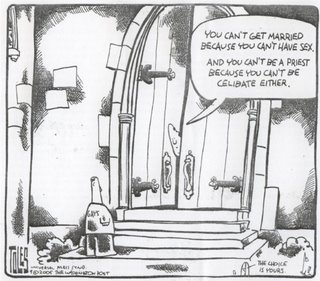 Instead of Scapegoating, Church Ought to Repent
By Michael J. Bayly

Pope Benedict seems certain to issue a directive barring gay men from ordination as Roman Catholic priests. For the majority of Catholics – and in particular gay, lesbian, bisexual and transgender (GLBT) Catholics – such a development is akin to rearranging the deck chairs on the Titanic. It’s a desperate, misguided and futile ploy – and one that signals the need for urgent reform within a Catholic Church rapidly declining in credibility.

For a start, how credible is the Vatican’s appeal to the language of psychology in justifying its ban on “disordered” gay men, when the mental health and medical professional associations do not consider homosexuality to be any type of “disorder”?

The Vatican’s frequent claim of an intrinsic link between homosexuality and pedophilia is similarly devoid of any scientific backing and is thus erroneous. Reactionaries within the church, however, continue to bolster such a claim with “research findings” from groups such as the National Association for the Research and Treatment of Homosexuality (NARTH). Yet what isn’t reported is that neither NARTH’s findings nor its methodology are seldom, if ever, offered to peer-reviewed journals for critical analysis. In short, the group lacks any respect from the wider scientific community.

Despite this, the Catholic Church’s official “support group” for GLBT people, “Courage,” often substitutes the word “homosexuality” with the NARTH-coined phrase, “same-sex attraction disorder” – a term unrecognized by any professional health association. Following NARTH’s lead, some members of Courage even consider their “disorder” to be curable, and explain its origin using debunked theories of dominant mothers, distant fathers and abusive family relations.

The quackery of NARTH is clearly endorsed and encouraged by some within the leadership of the church. It’s not surprising, then, that this same leadership fosters the erroneous connection between homosexuality and pedophilia. This is all the more deplorable when one surveys the findings of mainstream scientific studies that refute any link between homosexuality and the sexual abuse of minors. These studies conclude that “the belief that homosexuals are particularly attracted to children is completely unsupported” (Groth and Birnbaum), and that “a gay man is no more likely than a straight man to perpetrate sexual activity with children” (Stevenson).

Yet despite the overwhelming evidence to the contrary, the Vatican insists on blaming gay priests for the ongoing sexual abuse scandal within the church. Without doubt such a scandal exists, but who is really to blame? Who should be held accountable?

Pedophile priests must be brought to justice, that's a given, as must members of the church hierarchy who knowingly ignore such priests’ criminal activity and simply transfer them to other parishes or dioceses.

Yet what of the structures and attitudes that surround, enable, and even encourage and reward such deplorable actions?

Could it be that the scandal is so overwhelming because of the church’s dysfunctional hierarchical culture – one more reflective of imperial hubris than of the egalitarian model of community offered by Jesus? It is a culture clearly prone to face-saving silence and conspiratorial efforts at covering up and scapegoating rather than acknowledging and reporting long-term abuse of children and youth.

It is clear that the Vatican has failed in many ways. It has failed in promoting a teaching that reflects the diverse reality of human sexuality; it has failed in encouraging GLBT people, in particular, to celebrate and integrate their God-given gift of sexuality, preferring instead to promote through groups such as Courage, a shame-based preoccupation with sexual repression; it has failed to protect children from sexual abuse by pedophile priests; and it has failed to hold itself fully accountable for its own complicity in this abuse.

It is time for Catholics to publicly and vocally reject the misguided scapegoating tactics of the Vatican and to demand an end to its discriminatory policies preventing not only gay men, but also married straight men and women from entering the priesthood. It is time for Catholics to demand an open and thorough accounting of the real issues behind the church’s tragic sex abuse scandal.

Only then will we see a reformed priesthood and a renewed Catholic Church – one truly universal and open to the gifts of all its members.