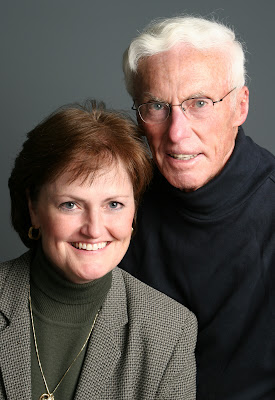 Carol Curoe and her father Robert.

Following is a statement to the media released yesterday by the Catholic Pastoral Committee on Sexual Minorities and Syren Book Company.

The Archdiocese of St. Paul/Minneapolis has banned an 82-year-old “cradle Catholic” and his daughter from speaking at a Catholic parish.


Robert and Carol Curoe, co-authors of the recently released book Are There Closets in Heaven? A Catholic Father and Lesbian Daughter Share Their Story, were to speak Monday at St. Frances Cabrini Church in an event organized by the Catholic Pastoral Committee on Sexual Minorities (CPCSM) and Catholic Rainbow Parents.

Yet according to Michael Bayly, executive coordinator of CPCSM, the church was informed that due to “the number and intensity” of calls and e-mails received by the Archdiocese opposing the event, it could not be held on church property.

“The Archdiocese’s decision to ban the Curoes is very sad and misguided.” Bayly said.

The Curoes have been engaged in a book speaking tour of the Midwest for the last month, speaking at a range of venues and receiving overwhelmingly positive responses to their story.

Their book has been described as “a testimony to the power that faith and love can play in bringing families together.”

Retired Catholic bishop Thomas J. Gumbleton of Detroit has endorsed the book, noting that father and daughter’s “willingness to share their journey will help break down many barriers of prejudice and discrimination facing the homosexual community.”

“Obviously, we’re disappointed, and we are still trying to understand it,” said Carol Curoe. “Our book, Are There Closets in Heaven? talks about an 82 year-old, life-long Catholic father trying to understand and practice his faith within his Church while also loving his daughter as he does her siblings. Neither our journey, nor writing the book, was an easy task.”

Despite the banning of the Curoes’ speaking engagement at St. Frances Cabrini, Monday’s event will still take place.

“This whole incident has reaffirmed our commitment to help build spaces of safety and respect within the Church for gay people,” says Bayly.

One of these spaces is a recently established center called The House of the Beloved Disciple, located at 2930 13th Ave. S., Minneapolis, in the building that is also the home of Spirit of the Lakes United Church of Christ. The Curoes will speak at The House of the Beloved Disciple on Monday, October 22, at 8:00 p.m. [Update: For photos and a commentary on Carol and Robert Curoe’s October 22 presentation, click here.]

“I hope this unfortunate event does not mean that CPCSM’s days of being welcomed to host educational and story sharing events in Catholic parishes are over,” said Bayly. “Though disappointing, the banning of the Curoes is not altogether surprising – especially given the climate of fear and intimidation that has steadily increased throughout the Church over the past few years.”

“CPCSM has been around for 27 years, and though it has always been a grassroots and independent organization within the local Catholic community, for most of its history it has also been the primary resource for LGBT Catholics and their families within this archdiocese and, to a lesser extent, within the rest of Minnesota as well.” Bayly said. “It’s clear that our sharing of Jesus’ message of compassion and justice is now needed more than ever within the Church.” (For an overview of CPCSM’s history and its ministry accomplishments, click here.)

Are There Closets in Heaven? A Catholic Father and Lesbian Daughter Share Their Story, published by Syren Book Company is a revealing first-person dialogue between a lesbian daughter, who had always dutifully tried to please her parents, and her Catholic father, an eighty-one-year-old farmer from Iowa. Through their letters and reflections, we see how courage and love made it possible for Bob and Carol Curoe to navigate the twists and turns of such a dramatic shift in their lives.

The Catholic Pastoral Committee on Sexual Minorities (CPCSM) is a grassroots, self-supporting, and independent coalition dedicated to promoting ministry to, with, and on behalf of lesbian, gay, bisexual and transgender (LGBT) persons – primarily of a Roman Catholic background – and their families and friends.

CPCSM seeks to create communities that are images of justice and inclusiveness, both in the Church and in society at large; to foster safe and affirming spaces for GLBT youths, adults, families, and their friends as we help them to integrate their sexual identities with their Catholic heritage; to combat violence, abuse, injustice, and prejudice; and to cultivate a world in which all human beings are regarded as worthy of love and respect.

For an October 2007 interview with Carol Curoe, click here.

See also the related Wild Reed posts:
• Choosing to Stay
• Truth Telling: The Greatest of Sins in a Dysfunction Church
• Voices of Parental Authority and Wisdom