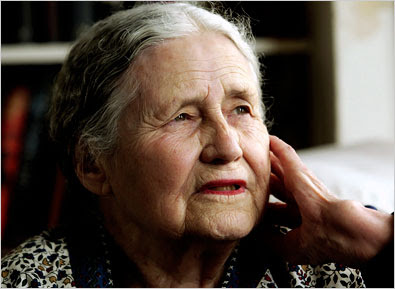 As I noted in a previous Wild Reed post, British author Doris Lessing is somewhat of an inspiring figure to me – not only in terms of her pragmatic intelligence and compelling writing, but also the example she gives in living an integrated life.

It’s a life that doesn’t shy away from meaningful engagement with the political and social realities of our times, while remaining ever vigilant against, and, whenever possible, confrontative of the excessive and dehumanizing traits of all forms of ideology.

NPR correspondent Lynn Neary
notes that Lessing, “in her novels, essays and works of science fiction . . . has explored many of the burning issues of the era, including racism, communism, feminism, environmentalism and terrorism.”

Jonathan Burnham of Harper Collins, Lessing’s American publisher, similarly observes that: “One of the most important aspects of Lessing’s work is that she show[s] that you [can] explore ideas — political ideas, cultural ideas, philosophical ideas — through fiction, in a very persuasive way.”

An e-mail from my friend Rick alerted me to this morning’s announcement that the Swedish Academy had awarded Doris Lessing with the 2007 Nobel Prize for Literature. I’m very happy for her, and consider it a well-deserved (and long-overdue) honor.

Media coverage of Lessing’s Nobel Prize win clearly shows her taken aback when, returning home in a black London cab and ladened with bags of groceries, she is confronted by reporters at her doorstep. Her response to being informed of her honoring by the prestigious Swedish Academy was one of typical Lessing candor: “Oh Christ . . . I couldn’t care less.”

“This has been going on for 30 years . . . I can’t say I’m overwhelmed with surprise,” Lessing said as she made her way to the front door of her modest brick row house in North London. “I’ve won all the prizes in Europe, every bloody one, so I’m delighted to win them all, the whole lot, OK? It’s a royal flush.”

“I’m sure you’d like some uplifting remarks,” she added with a smile.

Associated Press writer Raphael G. Satter writes that later (presumably after unpacking her groceries!) Lessing, sitting on her front step and “surrounded by members of the international media in her flower-packed garden,” was “dismissive” of the Nobel Prize, calling the award process “graceless” and saying the prize “doesn’t mean anything artistically.”

“She acknowledged the $1.5 million cash award was a lot of money,” says Satter, “but still seemed less than thrilled.”

“Lessing,” continues Satter, “brightened when a reporter asked whether the Nobel would generate interest in her work. ‘I’m very pleased if I get some new readers,’ she said. ‘Yes, that’s very nice, I hadn’t thought of that.’ She said she hoped the Nobel would draw readers to her latest writing project, Alfred and Emily, which imagines her parents – whose lives were shattered by World War I – as they might have lived had the war never intervened. ‘I’ve given them lives without war,’ she said. ‘I’ve given them lives, decent lives, the kind we live because we haven’t had war, and that we take for granted.’ The second part of what she said would be a ‘passionately anti-war’ book would chronicle the full effect of the conflict on her parents’ lives.”

Following is an excerpt from the New York Times’ coverage of Lessing’s Nobel Prize win. 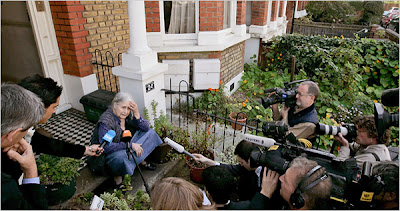 Doris Lessing, the Persian-born, Rhodesian-raised and London-residing novelist whose deeply autobiographical writing has swept across continents and reflects her engagement with the social and political issues of her time, on Thursday won the 2007 Nobel Prize for Literature.

Announcing the award in Stockholm, the Swedish Academy described her as “that epicist of the female experience, who with skepticism, fire and visionary power has subjected a divided civilization to scrutiny.” The award comes with a 10 million Swedish crown honorarium, about $1.6 million.

Ms. Lessing, who turns 88 later this month, never finished high school and largely educated herself through voracious reading. She has written dozens of books of fiction, as well as plays, nonfiction and two volumes of her autobiography. She is the 11th woman to win a Nobel Prize in literature.

Ms. Lessing learned of the news from a group of reporters camped on her doorstep as she returned from visiting her son in the hospital. “I was a bit surprised because I had forgotten about it actually,” she said. “My name has been on the short list for such a long time.”

As the persistent sound of her phone ringing came from inside the house, Ms. Lessing said that on second thought, she was not as surprised “because this has been going on for something like 40 years,” referring to the number of times she has been on the short list for the Nobel. “Either they were going to give it to me sometime before I popped off or not at all.”

Stout, sharp and a bit hard of hearing, after a few moments Ms. Lessing excused herself to go inside. “Now I’m going to go in to answer my telephone,” she said. “I swear I’m going upstairs to find some suitable sentences which I will be using from now on.”

Although Ms. Lessing is passionate about social and political issues, she is unlikely to be as controversial as the previous two winners, Orhan Pamuk of Turkey or Harold Pinter of Britain, whose views on current political situations led commentators to suspect that the Swedish Academy was choosing its winners in part for nonliterary reasons.

Ms. Lessing’s strongest legacy may be that she inspired a generation of feminists with her breakthrough novel, The Golden Notebook. In its citation, the Swedish Academy said: “The burgeoning feminist movement saw it as a pioneering work and it belongs to the handful of books that informed the 20th century view of the male-female relationship.”

Ms. Lessing wrote candidly about the inner lives of women and rejected the notion that they should abandon their own lives to marriage and children. The Golden Notebook, published in 1962, tracked the story of Anna Wulf, a woman who wanted to live freely and was in some ways Ms. Lessing’s alter-ego.

Because she frankly described anger and aggression in women, she was attacked as “unfeminine.” In response, Ms. Lessing wrote: “Apparently what many women were thinking, feeling, experiencing came as a great surprise.”

Although she has been held up as an early feminist icon, Ms. Lessing later disavowed that she herself was a feminist, earning the ire of some British critics and academics. . . .

Clare Hanson, professor of 20th century literature at the University of Southampton in Britain and a keynote speaker at the second international Doris Lessing Conference this past July, said: “She’s been ahead of her time, prescient and thoughtful, immensely wide-ranging.”

In a review of Under My Skin, the first volume of Ms. Lessing’s autobiography, Janet Burroway, writing in the New York Times Book Review, said: “Mrs. Lessing is a writer for whom the idea that ‘the personal is the political’ is neither sterile nor strident; for her, it is an integrated vision.”