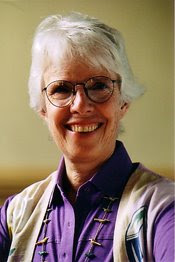 I find myself drawn to this particular reflection on authority by Heyward (pictured at right) given that much of my work with both CPCSM and The Progressive Catholic Voice involves identifying and proactively responding to Roman Catholicism’s damaging (and ongoing) embodiment of coercive “force” in contrast to genuine “authority” - which, as Heyward notes, is not obsessed with or embodied in rules, punishment, threats, or intimidation, but is instead organic, encouraging, and trustworthy.

I begin with a story about authority, which I heard many years ago:

Once there was a wise old woman, a witch, who lived in a small village. The children of the village were puzzled by her – her wisdom, her gentleness, her strength, and her magic. One day several of the children decided to fool the old woman. They believed that no one could be as wise as everyone said she was, and they were determined to prove it. So the children found a baby bird and one of the little boys cupped it in his hands and said to his playmates, “We’ll ask her whether the bird I have in my hand is dead or alive. If she says it’s dead, I’ll open my hands and let it fly away. If she says it’s alive, I’ll crush it in my hands and she’ll see that it’s dead.” And the children went to the old witch and presented her with this puzzle. “Old woman,” the little boy asked, “This bird in my hand – is it dead or alive?” The old woman became very still, studied the boy’s hands, and then looked carefully into his eyes. It’s in your hands,” she said.

Genuinely creative authority, sacred at its root, is in our hands. It moves us more fully into our bodyselves-in-relation. It touches and often frightens us as it calls us forth to become more fully who we are already: interdependent and mutual participants in this journey we call life.

The word “authority” comes from the Latin verb augere, which means to cause to grow, to augment that which already is. Deriving from augere, the Latin auctor (author) means one who creates or brings into being. Jesuit theologian Avery Dulles defines authority as “that which (or those whom) one has reason to trust.”

In this spirit, I offer a definition of authority as that which calls into being “something” that is already and, for that reason, can be trusted. The reason we can trust the authority of the story or resource or person is that it does not impose an extraneous set of expectations upon us but rather evokes “something” we already know, or have, or are. We need authority precisely for the purpose of helping us discover, recover, empower, and encourage ourselves and one another.

This experience of authority as organic and encouraging to who we are at our best is the antithesis of the more prevalent notions – and experiences – of authority as “force,” “coercion,” or “violence.” In the dominant culture, the imposition of will and judgment by those with power-over has become synonymous with authority. But, as social philosopher Hannah Arendt taught, if it’s coercive, it’s not authority: not real authority, not that which touches us in our souls, the foundational “place” within us in which we meet one another and find ourselves at home.

Force serves always to diminish. That is the purpose of violence. People who have to make us do something through rules, punishment, threats, or intimidation may exercise force in our lives, but they hold no real authority for us. Because authority is that which (or those whom) we can trust to help us become more, not less, ourselves.


See also the previous Wild Reed posts:
• Thoughts on Authority and Fidelity
• Beyond Papalism
• The Power of Our Stories
• The Holarchical Church: Not a Pyramid But a Web of Relationships
• It’s Time We Evolved Beyond Theological Imperialism
• Our Catholic “Stonewall Moment”
• A Church That Can and Cannot Change
• A Smaller, Purer Vision of Church - and Why It Won’t Work
• A Catholic Understanding of Faithful Dissent (Part 1)
• A Catholic Understanding of Faithful Dissent (Part 2)

I loved that story. Thank you.