Walking for Peace, Witnessing Against War 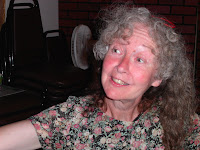 This past Monday night I traveled with friends to Red Wing so as to greet and support a group of peace activists walking from Chicago to St. Paul. Organized by Voices for Creative Nonviolence, the main purpose of the Witness Against War 2008 Walk is to challenge and nonviolently resist the war in and occupation of Iraq.

Among the walkers is Catholic Worker and veteran peace advocate Kathy Kelly (pictured above) whom I’ve long found to be an inspiration in my own advocacy work for justice and peace. 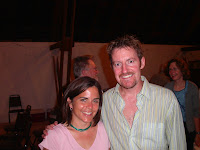 I was also moved by the witness of Lauren Cannon (pictured with me at left), who at one point during Monday night’s proceedings at the Hobgoblin Music Loft in Red Wing spoke powerfully and eloquently about her involvement in the walk and her experiences in Iraq.

Of course, their destination — St. Paul — may be even more so, once they’ve completed their mission. Members of the peace group Witness to War stopped here for a couple days in the midst of an approximately 500-mile walk from Chicago to St. Paul.

“It re-energized us,” Voices for Creative Nonviolence activist Joshua Brollier said Monday, recalling how local supporters joined up with the group as they passed into town.

The group, which began its trek in mid-July, stops in cities to present is main message of nonviolent resistance to wars in Iraq and Afghanistan.

The group on Monday took to the stage at Hobgoblin Music Loft, where several of the walkers explained why they undertook the effort.

The peace effort has a long history of marches and walks, Brollier said. “We want to kind of follow in that tradition,” he said.

Others who have spent time in Iraq shared their stories.

Co-coordinator Kathy Kelly watched Iraqi children grind their teeth and lose their bladders as bombs fell all around them in 2003. [She actually saw far worse than this during her numerous visits to Iraq dating back to the US/UN sanctions regime. See image 27 here and image 132 here.]

As a peace activist, Kelly was present in Iraq during the initial “shock and awe” campaign, which left parts of Baghdad blown to smithereens.

“We’ve seen the consequences of war,” Kelly said Monday in an interview with the Republican Eagle.

Witness Against War organizers note that the walk's staging point in Chicago was also home to the historic riots that took place during the 1968 Democratic National Convention.

Despite the mention, Kelly said the group has no intention of re-creating the violence that marred the convention.

“It’s our responsibility to galvanize the public opinion ... into an experience that will reach elected officials and people aspiring toward elected office,” she said.

Their feet, however, won’t get immediate rest in St. Paul.

The group will join up with other activists marching from the Capitol to the Xcel Energy Center, where this year’s Republican National Convention is being held.

Members of the group, which swells to about 40 people in stages, acknowledged that they have experienced resistance along the way. Their tack is to engage antagonists with gentle words, an approach Kelly said has changed some minds.

“Quite often, people go away feeling there’s more in common between us than what divides us,” she said.

Michael Bayly traveled from St. Paul for Monday’s presentation at Hobgoblin. Witness Against War members painted a much more detailed picture of the war in Iraq than he said he’s used to seeing in the mainstream media.

“It’s encouraging to see people take such a strong stand and make such sacrifices,” Bayly said.

The group leaves today for Diamond Bluff, and then on to Prescott, Wis. 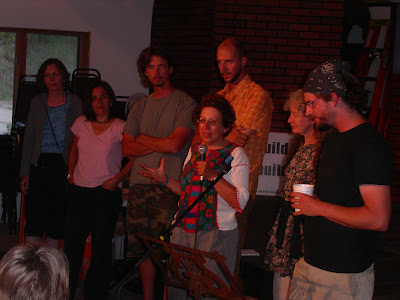 Above: Members of the Witness Against War walking team - Red Wing,
August 25, 2008. For bios on each of the walkers, click here. 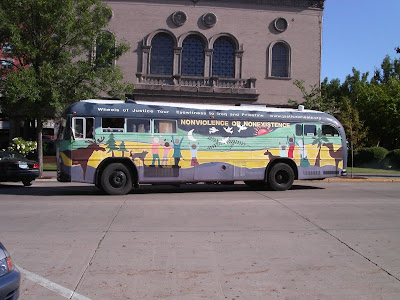 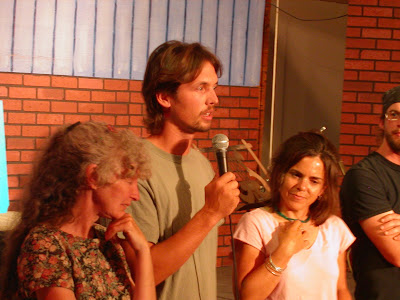 Special Thanks: To my friend, Pepper, for bringing this article to my attention.

See also the previous Wild Reed posts:
Walking Against Weapons
Fasting, Praying, and Walking for Immigration Reform
General Strike for Peace
An Unholy Alliance in Iraq
Let’s Also Honor the “Expendables.”
A Reign of Ignorance and Fear in the U.S.
John Pilger on Resisting Empire
In Search of a “Global Ethnic”