Something for Our “Mental Hygiene” as Gay Catholics 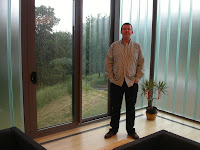 Catholic theologian James Alison (pictured at right at St. John’s Abbey, Collegeville, MN, in July 2008) has recently posted on his website an article entitled “The Pain and the Endgame: Reflections on a Whimper.” As with all of Alison’s writings, it’s a very thoughtful and erudite reflection on gay people and the Roman Catholic Church.

In reviewing “The Pain and the End Game,” Terence, over at Queering the Church, notes that:

The overriding message of this article . . . appears to be a simple one: [Pope] Benedict has recognized, or is coming to recognize, that past hostility to ‘homosexuals’ has been misplaced, and is leading the hierarchy through a process of downplaying past condemnations, which will lead in turn to an increasing recognition of the need for a new theology of homosexuality. This is a development, says Alison, that he has long anticipated, but it is occurring sooner, and more subtly, than he had expected.

As intriguing as this contention may be, the part of “The Pain and the Endgame” that I found most interesting was the section (reprinted below) in which Alison reminds us of the need to distinguish between “the figure of Peter and the particular personal and cultural opinions” of the current pope.


It is easy enough for any of us to enter into a sort of personal mimetic rivalry with the Pope, such that he becomes far too important to us, and we are far too easily inclined to imagine that we know what he actually thinks about any given thing, and usually far too quick to “read” some reported remark as hostile to us, and so to interpret him in a relentlessly negative way. If we are all only political animals, and the Church merely yet another player in the field of human culture wars, then this appears to be a perfectly reasonable attitude to take: the Pope can be assimilated into our particular political and cultural struggle, and be adopted as a useful cultural marker against which we can react when what he says appears to be, or genuinely is, against us, or occasionally he can be used as a positive banner when he happens to stand up for something with which we agree.

However, for our mental hygiene as gay Catholics, it is worth remembering that this is not how either Jozef Ratzinger, or the Church, sees the Pope. Jozef Ratzinger may be a somewhat culturally conservative Bavarian theologian of a certain age and generation. He may have many of the social and political richnesses of view, and prejudices, proper to those of his time and place. He may or may not have ignorant or well-informed views about matters gay. He may or may not be a self-hating gay man who has a blind spot in this area as a certain press suggests. We can’t know, and I don’t suppose we ever will: the papal “persona” makes of its occupant’s biography too much of an interpretative minefield during his life and for too long after his death for us really to “know” the man. And in the sphere of matters gay, he long ago gave up the possibility of expressing his personal opinions in any sort of public forum. But what he certainly is, and knows he is, is called to act as Peter, whose role and function is one of strong, mistaken, and penitent service to us as the Body of Christ. Someone in fact, whose mistaken-ness and penitence make him the only sort of leader with whom we can’t really be tied into a mimetic rivalry.

Here it seems to me that we need to spend more time thinking about this figure if we are not to be scandalized by the office holder. What I would expect of Peter is someone who had strong views in a matter of religious rightness and sanctity. When faced with the mounting evidence that in matters gay the teaching of the Church has been based on a taboo, that is, a sacred idol, a series of violent lies which seemed to be holy but were not, I expect Peter at first to hold firm. Then, as it becomes clearer that what seemed to be from God was not from God, and that God is revealing something new and fresh about God’s creation, God’s impartial love for all of creation and how no human is profane or unclean (Cf Acts 10), I expect him gradually to get it, to recognize that what had seemed “outside” has been brought in by a power not his own, for God’s holiness is shown in Creation made fully alive.

I then expect him to help this change of heart concerning what is to percolate through the Church by removing such obstacles to it as he can, while doing his very best not to scandalize those of weak faith who feel lost and threatened by the change of world which is coming upon us, but nevertheless, ultimately ratifying the change. I would expect him to be very keen to be trying to formulate other ways of making clear God’s holiness and power given the collapse in vision which seemed to accompany the realization that what seemed holy was not. I expect this to take place over time, over several pontificates, and to be a thoroughly messy business, an endgame full of flailing around in which the Gospel truth only emerges slowly, but does emerge surely.

To read James Alison’s “The Pain and the Endgame: Reflections on a Whimper” in its entirety, click here.

See also the previous Wild Reed posts:
Catholic Teaching on Homosexuality: Complex and Nuanced
How Times Have Changed
Compassion, Christian Community, and Homosexuality
Hypcrisy, Ignorance, Promiscuity, and the Love that is the Center of Catholic Christianity
Celebrating Our Sanctifying Truth
Our Catholic “Stonewall Moment”
A Catholic Presence at Gay Pride

Alison's piece is articulate, subtle and hopeful...yet I am left unconvinced. Perhaps he is correct in reading in these almost imperceptible shifts of language and approach the beginning of a wave of change in attitude and teaching. Perhaps.

My Chicago-realism, though, leads me to believe that if it walks like a duck and talks like a duck... Thus, I really can't say I've seen anything from Benedict to even hint at any change to come...at least not in his lifetime.