The Vatican and US Women Religious 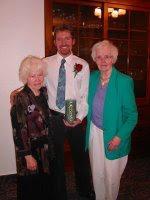 As I’ve noted in a number of previous posts, I’m a consociate of the Catholic order of the Sisters of St. Joseph of Carondelet, St. Paul Province. Consociates are men and women of diverse ages, ministries, spiritualities, faith traditions, and backgrounds. What we all have in common is an expressed desire to live the Sisters of St. Joseph (CSJ) mission to love God and neighbor without distinction. In short, consociates live the vision and values of the Sisters within the framework of their own lives and responsibilities.

Recently, the CSJs, along with a number of other U.S. women religious orders that comprise the Leadership Conference for Women Religious (LCWR), have been under “investigation” by the Vatican.

What I find most interesting about this whole investigation business is how people from all walks of life – Catholic and non-Catholic – are openly expressing their disdain of the Vatican’s actions and willingly standing up for the women religious. Indeed, it seems the Vatican may well have met its match!

What can account for such a groundswell of support? I think columnist Regina Brett helps answer this question when she writes:

[Are the nuns] not keeping quiet? [Are they] not keeping their place? Here’s the thing, their place is everywhere. There is no way to stop their reach. It’s way too late for that.

They’ve infiltrated America. They taught millions how to read, how to think, how to discern right from wrong, how to err on the side of loving the poor.

Sister Susan Durkin told me, “We have nothing to hide. We stand on the shoulders of women who have been there serving on the front lines.”

The front lines, that’s where Sisters Dorothy Kazel, Ita Ford, and Maura Clarke died defending the rights of the poor in El Salvador in 1980.

It’s where Sister Dorothy Stang was murdered as she fought to save Brazilian rain forests. Where Sister Helen Prejean brings the face of God to broken men on Death Row.

It’s where Sister Mary Ignatia, patron saint of A.A., sneaked alcoholics into an Akron hospital for detox so they wouldn’t die in gutters and alleys.

Brett also relates the following, which I find very hopeful and inspiring:

Sister Mary Ann Flannery, who runs the Jesuit Retreat House in Parma, told me the exciting thing about being a nun is this: “You go where the grace leads you. You let the street be your chapel. Let your love of others be your vow.”

The hardest part of being a nun isn’t the vow of chastity. You don’t hear scandals about nuns running amok and having affairs right and left.

The hardest part is letting go of all they have loved about their sisterhood as convents merge and close.

Sister Mary Jane Masterson, of the Sisters of St. Joseph in Cleveland, just sent me her memoir, “One Nun’s Story Then and Now.” It’s the story of her love affair with God.

She’s not worried about the decline in nuns and priests. She believes the Holy Spirit is driving the change. She believes in a theology of hope. She doubts religious life will survive much longer, but that doesn’t make her sad.

“Our dying is other peoples’ rising,” she writes.

To be sure, this is an issue I’ll be watching closely. And I’ll also be praying that all involved in these Vatican “visitations” may be open to God’s Spirit of wisdom and compassion.

In closing, I share the following editorial about “What the Sisters Are Up To” from today’s New York Times. It focuses on the CSJ presence in New York and shares the thoughts of a number of people on the Vatican investigations.

What the Sisters Are Up To
By Francis X. Clines

New York Times July 12, 2009
Across 30 years, the modern version of the Sisters of St. Joseph has been revolutionizing the treatment of imprisoned women in New York. Thanks to the nuns’ efforts, mothers are now allowed to care for their infants on the inside and remain close to their children in creative visitors’ programs. Once they are paroled, these women and their children can find a year’s shelter in one of nine Providence House sanctuaries the nuns created in defunct city rectories and convents.

The order has never lacked courage: five members were guillotined in the French Revolution for giving shelter to the hunted. Now it is the bewildered community of American nuns that is the subject of two sweeping Vatican investigations. The question is whether the sisters are “living in fidelity” to the religious life — a question being put to nuns in no other nation.

Vatican investigations called “visitations” usually focus on serious flaws like the pedophilia scandal. So, what are nuns doing wrong? That is the question being asked by the sisters and legions of Catholic laypeople.

“Well, it’s all nonsense,” says Bob Bennett, a lawyer who led the church’s lay inquiry into the priest pedophilia scandal — which, he says, the church has still not fully addressed. He is amazed that American nuns, of all good people, are suddenly being scrutinized. “They are the jewels, the church’s class act,” he says.

The sisters won’t talk publicly about fears that the Vatican’s goal is to push them back toward a more submissive veil-and-wimple past. At the Providence House programs last week, they talked instead about the myriad problems of their ex-con mothers trying to get a grip on life. As ever, the nuns labor at the brink, begging alms to keep their mission going. “Look, none of us are marching to get women ordained,” one sister said in putting down the cliché that they seek to undermine Rome.

Tom Fox, editor of The National Catholic Reporter, suspects the inquiries are steeped in patriarchy and male chauvinism. “Next time, let’s have our women religious study the quality of life of our male clerics,” is Mr. Fox’s advice.