You may recall that in my previous post highlighting Worldwide Gay Pride, I included the image at right showing people in India both celebrating LGBT Pride and protesting Section 377 of the Indian Penal Code that makes homosexual relations illegal.

Well, as you’ll see from the following excerpt from an article in today’s Times of India, there’s good news to share about the efforts to decriminalize homosexuality and its expression.

India took a giant, albeit belated, step [forward] . . . on Thursday when the Delhi high court delivered a historic judgment to amend 149-year-old colonial-era law — Section 377 of the IPC — and decriminalise private consensual sex between adults of the same sex. It is the biggest victory yet for gays rights and a major milestone in the country’s social evolution. India becomes the 127th country to take the guilt out of homosexuality.

In [it’s] judgment . . . the court declared that Section 377 IPC, where it “criminalized consensual sexual acts of adults in private,” violated fundamental rights to personal liberty (Article 21 of the Constitution) and equality (Article 14) and prohibition of discrimination (Article 15).

In a courtroom tense with anticipation, the bench invoked Jawaharlal Nehru’s stirring words to the Constituent Assembly, while linking the issue of homosexuality with the politically resonant theme of inclusiveness. “If there is one constitutional tenet that can be said to be (the) underlying theme of the Indian Constitution, it is that of inclusiveness.” As a corollary, it added that “those perceived by the majority as ‘deviants’ or ‘different’ are not on that score excluded or ostracized.”

“There is almost unanimous medical and psychiatric opinion that homosexuality is not a disease or a disorder and is just another expression of human sexuality,” the court observed. 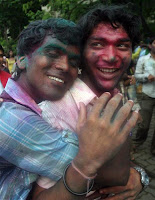 Though the provisions of this repeal will not be recognized outside of New Delhi and full equal protection under the law may be a long way off, the decision represents a massive step toward equality to many. As expected, however, many prominent religious figures have come out against the ruling, Lucknow Muslim cleric Maulana Khalid Rashid Farangi even going so far as to say that “Western culture cannot be permitted in [India]”. . . In spite of the long road ahead and intolerance in the meantime, India’s gay community remains hopeful. “We’ve finally entered the 21st century,” Anjali Gopalan, executive director of sexual health organization the Naz Foundation Trust, who filed the petition, told the Associated Press. “I’m so excited, and I haven’t been able to process the news yet.” Image 1: Participants dance as they hold a placard demanding the dropping of Section 377 of the Indian Penal Code that makes homosexuality illegal, during a Gay Pride Parade in New Delhi, India - Sunday, June 28, 2009. (AP Photo/Gurinder Osan)

Images 2-5: Gay citizens and their supporters outside Delhi High Court after it annulled the law that criminalizes adult homosexual relations, in New Delhi. (TOI Photo)

One feature in this widely welcomed story has been mostly ignored. It was a colonial law which criminalised homosexual relations in the first place. In the ancient world, in non-Western societies, and in Christian Europe for the first millennium and more, it was not homosexuality but exclusive heterosexuality which was seen as unnatural.

In overturning this law, India is simply returning to the tradition of its rich, thousands years old,tradition.

Thanks for pointing out this story's often ignored feature, Terence, and for expanding on it so insightfully.