The Misplaced Priorities of the Catholic Church in Maine

In a recent online story, Michael Jones questions if the Roman Catholic Church in Maine would rather spend money to end marriage equality within the civil arena than save its own parishes from financial ruin.

article in its entirety.

In the wake of Maine’s same-sex marriage laws, a handful of anti-LGBT activists have launched a campaign to kill marriage equality, and the state’s [Roman] Catholic Church has taken the lead in these efforts. The Catholic Diocese of Maine, in fact, gave $100,000 toward efforts to defeat marriage equality, and the Diocese’s main communications guy, Marc Mutty, is a leading spokesperson for the anti-LGBT movement in Maine. 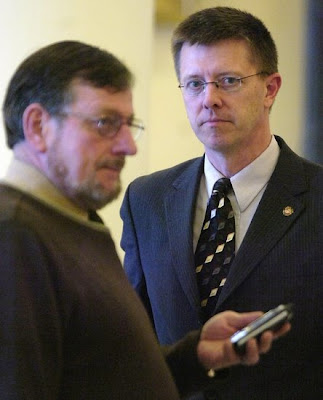 Above: Not happy campers: Mark Mutty, director of public affairs for the Roman Catholic Diocese of Portland (left) and Mike Heath, executive director the Maine Family Policy Council attend a marriage equality press conference in the Hall of Flags at the Statehouse in Augusta - January 2009. (Photo: Joe Phelan)

Here’s an interesting fact, though: While the Roman Catholic Diocese of Maine gave $100,000 to bash the rights of gays and lesbians, they also had to close two parishes in Lewiston, Maine, as well as fire employees at Trinity Catholic School. The reason for the parish closings and the firing of Catholic school employees? Declining revenue.

Maybe, just maybe, the Catholic Diocese of Portland should stop spending money on anti-LGBT campaigns, and instead spend a little money taking care of their own. Instead, they’re hemorrhaging money toward an effort to beat back civil rights, while churches are forced to close and Catholic school employees get fired. Talk about misplaced priorities.

Mutty, the anti-LGBT spokesperson from the Diocese, even seemingly admitted that people might start to question the priorities of the Catholic Church. Here’s a quote from the Sun Journal in Maine from Mutty:

There’s no question that some would say that it’s a shame we have to spend this kind of money on this kind of issue when we should be spending it on the poor or those kinds of things.

Here’s a memo to Mutty: not only would some people say it’s misdirected to spend this type of money on denying rights to gays and lesbians instead of on initiatives for the poor, but Jesus himself would have likely said the same thing, too.

The Catholic Church isn’t the only one guilty of this, either. Focus on the Family, which has already had to lay off more than 20 percent of its staff, has found a way to funnel more than $30,000 into Maine to blast marriage equality.

Despite the fact that the Catholic Church, Focus on the Family, and other national organizations have raised more than $300,000 for their discriminatory campaign, only $400 has been raised from actual Maine citizens to defeat marriage equality. So it sure seems that while national groups throw money into Maine, the state’s actual citizens aren’t backing them up with resources from their own pocketbook. Might that be a sign that these national organizations and the Catholic Church are out of step with Maine’s population on the issue of marriage equality?

See also the related Wild Reed posts:
A Call to Emphasize Catholicism’s Sweet Spot
Maine Becomes Fifth State to Allow Same-Sex Marriage
“We Can Make it Happen” - Sen. John Marty on Marriage Equality in Minnesota
The Same People
Love is Love
The Changing Face of “Traditional Marriage”
Separate is Not Equal
Love and Justice in the Heartland
A Mother’s Request to President Obama: Full Equality for My Gay Son
Marriage Equality in Massachusetts: Five Years On

Michael, thanks--this is an excellent posting about a very important issue (it seems to me). In my view, the church is shooting itself in the foot when it spends such funds to oppose the human rights of a targeted minority, while depriving its own communities (often the most economically marginal parishes and schools) of much-needed funds.

Makes it hard for the church to convince people when it talks about its commitment to human rights and social justice. If the church is so concerned about threats to marriage, why not spend funds combating divorce? It seems to me there's strong empirical evidence that divorce is a bigger threat to heterosexual marriage than gay marriage is.

This article is a classic example of why intellectulising issues of faith is both in appropriate and inane. While on the surface and from a purley materialistic perpsective it seem immeninatly logical that to spend $100,000 on saving jobs is the correct thing to do.

But, if one believes, as any christan who has been properly educated in their faith would know, this world is a a transitory existence ruled by God's Laws which very clearly dictate that marriage is a union between a man and a women for the purpose of procreation and to form stable loving FAMILIES within which propery eductated christians can be raised.

If one looks at what the Catholic Church is doing then what other morally, philosophically or indeed logical alternative does it have.

Surely the sanctitiy of marriage and the stability of all of Christianity in the eyes of the true church must be far more important than the transitory suffering of a few true believers.

If people can't see this then it it trulely sad, but only to be expected in a world where most of us are almost incessantly engaged in thinking about ME ME ME rather than what it is that GOD truely wants from US as a collectve and loving community.