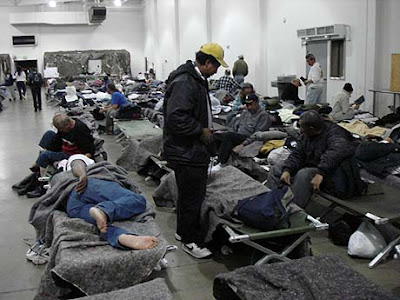 A donation will be made to a local homeless shelter
for every one of the MN bishops' anti-gay marriage DVDs
that is passed on to newly formed group.

A local group of Catholics concerned about the priorities of the clerical leadership of the Archdiocese of St. Paul and Minneapolis, have established a website that offers a plan of action for responding to the MN bishops’ mailing of 400,000 anti-gay marriage DVDs to Catholic households throughout the state.

Focusing on the “single issue of same-sex marriage shortly before the upcoming election,” states the site, “reflects misguided priorities and strays from the essential teachings of Christ.”

Accordingly, for every DVD sent to them from Catholics in disagreement with the clerical leadership's focus and strategy, the creators of Return the DVD will personally make a financial donation to St. Stephen’s Human Services.

“Our call to action is to create some good out of this unfortunate situation,” they write on their website.

Although not affiliated with St. Stephens Human Services, a non-profit working to end homelessness in the Twin Cities, those behind Return the DVD chose to make donations to this particular organization because it provides much needed services to the poor and homeless in Minnesota and does so regardless of recipients’ race, creed or sexual orientation.

The Catholics who have established Return the DVD also pose the following questions on their site:


• How could the over $1 million spent to distribute these DVDs have benefited the poor?

• Why did the [clerical] leadership in the Archdiocese choose same-sex marriage as the central issue to educate Catholics about now? Shouldn’t we spend at least as much (or more) time and energy educating Catholics about the plight of the poor in our area?

Although it's stated on the website that the plan is to return the DVDs to the Archdiocese of St. Paul-Minneapolis, negotiations are underway for all DVDs received to be sent to local artist Lucinda Naylor for her DVD to Art project - one that has seen her suspended from her 15-year-long position as Artist-in-Residence at the Basilica of St. Mary in Minneapolis.

Good luck with this. God bless you and all those who are working to help the homeless and fight hatred and bigotry directed at gay people.

Beautiful response! Constructive and powerful witness to taking something "meant for evil but making it good." Anne

The Archbishop indicated that the entirety of the money spent on this DVD was donated by a single anonymous donor. Thus no money was diverted from any efforts to help the poor.

I think, if we consider ourselves to be faithful people, we should, for the good of our world, watch the DVD and accept what the Archbishop and the Church teaches.

Once we watch the video, save money wasted on postage to return the DVD and make an even bigger donation to helping the poor.

Well, Andre, who was this anonymous donor. Was it a politician? Was it a political group? Why not spend that money on the poor or give it to hard pressed Catholic school. A lot of Catholic schools are closing because many people can no longer afford Catholic educations for their children. And the diocese spends money on a DVD that will encourage hostility and prejudice against a group of people. For shame.