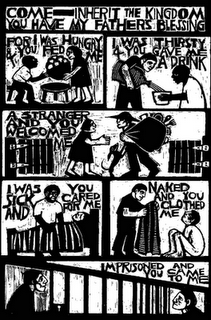 Mmm . . . nothing about "I was gay and you
denied me civil marriage rights."

The Washington Independent recently published an interesting article by Jesse Zwick on the Knights of Columbus and their funding of efforts to deny civil marriage rights to same-sex couples — at the expense, mind you, of their services to the poor. See what I mean by “misplaced priorities”?

According to Zwick, the Knights of Columbus, a Catholic fraternity society, gave “a whopping $1.4 million in 2009 to the National Organization for Marriage (NOM), a nonprofit group dedicated to fighting same-sex marriage through the ballot initiative system in California, Maine and other states.”

The Knights’ donation to NOM, notes Zwick “eclipses what [it] spent on some of its own charitable programs — such as its new effort supporting food banks or its total spending on education initiatives — in the same year, much to the outrage of some observers, including Catholic groups.”

Here in Minnesota, the funding of anti-marriage equality organizations and initiatives is an especially relevant issue. The Catholic Conference of Bishops has recently launched a campaign opposing same-sex civil marriage. This campaign includes the mailing of a DVD to 400,000 Catholics - a DVD produced by the Knights of Columbus, and a mailing estimated by some to have cost over one million dollars. Interviewed yesterday on Minnesota Public Radio, Archbishop Nienstedt said that he did not know how much it cost to produce or distribute the DVD and that a private donor who funded the effort had “asked to remain anonymous.” The Archbishop didn't say if he had suggested to the donor that a more Gospel-oriented cause would be better served by such a generous donation. 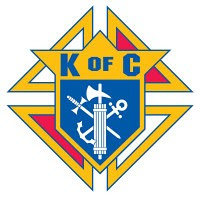 Gay-rights activists have long speculated that the Mormon Church was the primary benefactor behind NOM. But the Knights of Columbus disclosure shows the Catholic group played a pivotal role in funding NOM’s efforts to deny marriage rights to gay and lesbian couples.

. . . NOM continues to spend millions on its legal challenges in Maine, its deep pockets apparently dictating a strategy to challenge and delay disclosing its donors’ names in the courts as long as possible. But the Knights of Columbus’s role in funding NOM — as well as more overt forms of support for Maine’s Amendment 1 initiative from the Roman Catholic Diocese of Portland, Maine – are prompting Catholics opposed to the Church’s involvement in marriage equality issues to organize and speak out.

“You’ve got this really interesting funnel of tax-free money coming from the Dioceses and the Council of Bishops and the Knights of Columbus directly to these campaigns,” notes Phil Attey, executive director of the newly launched organization, Catholics for Equality. “Why are groups like NOM hiding where they’re getting their money? If it turns out to be a front group for the conservative side of the church, Catholics have the right to know because the majority of American Catholics, and we can show you heaps of polls, don’t support that [kind of spending].”

Knights’ spokesman Patrick Korten sees NOM’s noncompliance with disclosure laws in a different light. “The fact of the matter is that those who favor same sex marriage are working hard to intimidate individuals and groups that support our cause, but [the Knights] are big enough that intimidation doesn’t work on us.”

In addition to the opacity of NOM’s funding, some Catholic activists have also taken offense to the fact that, in an economic downturn, the Knights of Columbus Supreme Council’s funding for anti-gay marriage causes has outstripped the amount of funds it supplied for several deserving charitable programs it highlights in its 2010 report.

“As the recession has continued to make it difficult for people who have become unemployed or underemployed, or otherwise get by on lower incomes, the Knights of Columbus has stepped in to help,” notes the Knights’ 2010 report. It highlights a $1 million fund set up by the Supreme Council to supplement the efforts of local councils to support food banks through its new “Food For Families” program, and it touts its Coats for Kids program, which distributed coats to needy children.

But the Supreme Council’s spending on the two programs together still represents less than the $1.4 million it donated to NOM’s anti-gay marriage efforts in 2009. And the Council also donated an additional half million to NOM and $1.15 million to the California ProtectMarriage.com campaign the year prior. The Supreme Council’s total spending on community projects in 2009 (which include soup kitchens, homeless shelters, well drilling projects, and other forms of relief worldwide) totals approximately $3.5 million — an amount that exceeds its giving to anti-gay marriage proposition campaigns, but not by much. The Council’s spending on educational programs in 2009 totaled barely more than $1 million.

Korten nonetheless contends that the Supreme Council’s donations do not paint a full picture of the Knights of Columbus’ annual giving, calling its donations to organizations like NOM “a very small percentage” of the group’s charitable donations. “The vast majority of our charitable work is raised by local councils and that’s always been the case,” he adds.

But other Catholic activists predict that such spending on conservative causes will provoke a backlash among the faithful. “Do you think someone in New Mexico thought their donation was going to this effort in Maine, as opposed to aiding the sick and feeding the hungry?” asks George Burns, an attorney in Maine who fought NOM’s campaign to pass Amendment 1.

“If Catholics find out that while their parishes are closing, and charity work is being underfunded, that our church hierarchy is playing political games with their money, we believe that they’ll be as concerned as we are,” argues Attey.

See also the previous Wild Reed posts:
It’s a Scandal
The Minnesota Bishops’ Last Ditch Effort
Return to Sender
A Message for NOM
At UST, a Rousing and Very Catholic Show of Support for Same-Sex Marriage
The Misplaced Priorities of the Catholic Church in Maine
A Call to Emphasize Catholicism's "Sweet Spot"
Rebel Knights

Michael, it was nice to hear your voice on MPR yesterday morning, whilst I was driving to Rochester.