The Theology of Gay Pride 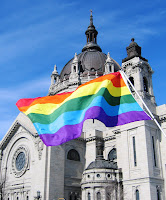 As I've done previously (see here, here and here), I'll be sharing throughout June a series of informed and insightful writings to mark Gay Pride Month . . . or, as I now like to think of it, Queer Appreciation Month.

I begin this year's series with a wonderful piece on the theology of gay pride written by fellow Catholic blogger Thom. It's a thoughtful reflection that Thom originally wrote last year for his must-read blog Faith in the 21st Century. Enjoy!

An Introduction to the Theology of Gay Pride
By Thom, OFS

June is Gay Pride Month.
Gay Pride is, simply, being proud of being gay, being proud of who God created you to be, recognizing the gift of human diversity, and that one's sexual orientation is inherent, not "learned."
June came to be recognized as Pride Month because the Stonewall uprising ("Stonewall riots") took place in June 1969.
Some Christians, who for various reasons do not like "Gay Pride," will often point to the use of the word "pride," and say that pride is a sin.
Pride is, of course, a sin. But sinful pride is not what is referred to by "Gay Pride."
Sinful pride is the desire to be more important or attractive than others, not recognizing the good work of others, and loving oneself excessively. Dante, when speaking of the "seven deadly sins," says of the sin of pride that it is "love of self perverted to hatred and contempt for one's neighbor."
If we consider pride (superbia) as vice, its corresponding virtue is humility (humilitas).
Gay Pride, then, is not sinful pride. This sort of pride is the antonym of shame, not humility. Shame has been used for centuries to control and oppress gay people. Therefore "Gay Pride" is liberation from that oppression, and not the vice of superbia.

For it was you who formed my inward parts; you knit me together in my mother’s womb.
I praise you, for I am fearfully and wonderfully made. Wonderful are your works; that I know very well.
My frame was not hidden from you, when I was being made in secret, intricately woven in the depths of the earth.
Your eyes beheld my unformed substance. In your book were written all the days that were formed for me, when none of them as yet existed.

NEXT: Bi God, Somebody Listen


See also the previous Wild Reed posts:
Dan Furmansky: "Why We Have Pride"
LGBT Catholics Celebrate Being "Wonderfully Made"
Gay Pride: A Celebration of True Humility
A Message to a Young Man of Integrity

"Gay Pride Month" states that "pride" is lacking in many of those who attempt to celebrate it. And "gay pride" is a bit of an oxymoron."

I always have thought of it as "refusal to be ashamed of who you are."

But I'm not as good with words as Thom, though.