Jesus and the Art of Letting Go 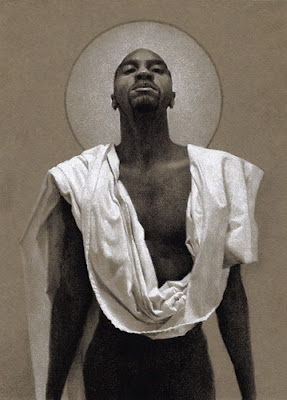 This series also includes artistic depictions of Jesus which for many people might be considered unconventional. Why? Well, as I discuss in Part 1, this is because many of us have become overly familiar with depictions of Jesus that are the product of the white American popular imagination. Seeing a non-European looking Jesus, such as the depiction above by Janet McKenzie, has the potential to turn upside-down our thinking and perception of Jesus and, by extension, of those around us whom we might consider as 'other.'

Today is Good Friday, an appropriate time to share an excerpt from that part of Nolan's book that focuses on detachment and letting go. It should be noted that the word 'detachment' is often understood as implying aloofness and indifference. Yet within numerous spiritual traditions this is not what the word means. As Nolan reminds us, detachment, when properly understood, "means freedom, inner freedom." It also expresses an important element in Jesus' spirituality: the ability to let go. In the Christian tradition, writes Nolan, this has been spoken of as "purity of heart" or the process of becoming "poor in spirit."

Following are more of Albert Nolan's thoughts and insights on Jesus and what I think of as the art of letting go.


Detachment is not a matter of giving up everything but of being willing to give up anything when called upon to do so. That is true inner freedom. In this sense, Jesus was radically free. He was not hindered in his freedom by any attachments at all, not even an attachment to his own life. He was willing to die if that were to become necessary.

We recall Jesus' paradoxical statement that when we try to save our lives, when we cling to our lives, when we are not willing to give up our lives for others, we are already dead. But as soon as we are willing to die, we become fully alive – and free. Most of us walk around with the threat of death hanging over us. We cope by just trying to forget that one day we shall die. Death is, as Paul says, the last enemy. But if we can learn to embrace death, we can take the sting out of it and then be truly free.

The willingness to die is the ultimate detachment. It incorporates all other forms of detachment, because it is the ultimate letting go of our ego. . . . None of this is possible without putting one's trust in God. If it were possible to let go of everything without grounding ourselves in God, we would become like an astronaut who has let go of the spaceship and will float forever in outer space. However, trusting God and being grounded in God does not mean attachment to God. It is not as if we become detached from everything except God, so that in the end we cling desperately to God because there is nothing else left to cling to.

Trusting God, as Jesus did, does not mean clinging to God; it means letting go of everything so as to surrender ourselves and our lives to God. There is a difference between attachment and surrender. In the end we must become detached from God too. We must let go of God in order to jump into the embrace of a loving Father whom we can trust implicitly. We don't need to hold on tightly, because we will be held – like a child in the arms of its parents.

There are people who cling to God. They make God into a crutch that they feel they must lean on because they are so wounded. That is understandable enough, and we should never lose our sympathy for such people. But there is a better way. We can let go. We can surrender. We can give ourselves in wild abandonment. We can trust God. Clinging, even clinging to God, is the work of a frightened ego. Surrender and trust come from the depths of our true self.

We do not know how Jesus felt or what he thought as he hung in agony on the cross, but there is a very ancient Christian tradition that he felt abandoned by God. In Mark and Matthew he is depicted as reciting Psalm 22, which begins: "My God, my God, why have you forsaken me" (Mk 15:34-35; Mt 27:46-47). The text is quoted partly in Hebrew and partly in Aramaic: "Eli, Eli, lema sabachthani?" – which is unusual and in itself a good reason for regarding the tradition as very old. But that does mean that in the end Jesus did not surrender, as he always did, to the mysterious will of God. Luke indicates this by quoting Jesus' last words as: "Father, into your hands I surrender my spirit" (Lk 23:46; my translation).