From Autoheart to Moscow, with Love… 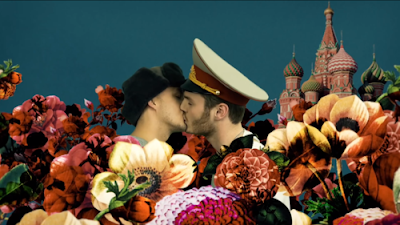 British band Autoheart has come up with a creative way to respond to the terrible anti-gay crisis in Russia.

But before I share it, here's how Alexander Abad-Santos, writing for the Atlantic Wire, summarizes the current situation in Russia. 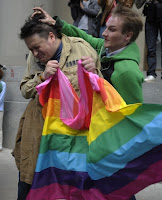 Over the past few months, Russian lawmakers have made that nation increasingly hostile to homosexuals. In June, for example, President Vladimir Putin signed a law banning "gay propaganda," which not only prohibits gay pride marches but potentially sends people to prison for explaining homosexuality to children. That same month, Putin signed yet another law allowing police to jail tourists who are believed to be homosexuals. And in July, Putin signed a law that bans gay couples, among other constituencies, from adopting Russian children. BuzzFeed has a powerful series of photos starkly showing the state-sanctioned violence gay people routinely face there. 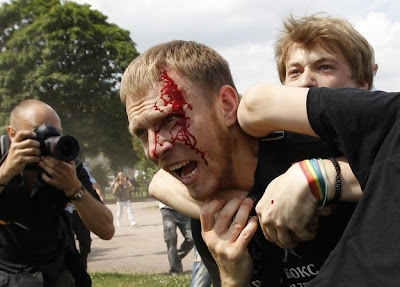 In the face of all this anti-gay violence, some are calling for a boycott of the 2014 Winter Olympics, which will take place in the southern Russian city of Sochi. Others are encouraging gay bars to stop buying Russian products, such as vodka and brandy. One bar in Chicago, The Call, has already propped up a sign that states, "proudly serving non-Russian vodkas." 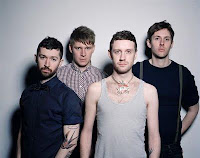 And then there's Autoheart's charming song "Moscow" and its accompanying video, one which depicts (very Pierre et Gilles-like) two Russian soldiers kissing in front of the Kremlin. Here's what the band (pictured at left) says about "Moscow" on their YouTube channel:

"Moscow" is a song about the daft optimism of being in love, when you just want to run away with that person, dream about being together forever, the house, the dog, and nothing else matters.

We are lucky in Britain to have laws that mean whether we are gay, straight, bisexual or anything in between, our relationships are recognised and our rights protected by law. But in Russia there is an anti-gay crisis happening right now: their government does not want to afford their people those same rights and are trying to criminalise even the discussion of gay equality.

In our video, two gay Russian soldiers kiss in front of the Kremlin – yet just last month a group of same-sex couples in Moscow were violently attacked and then arrested for doing just this.

Wouldn't it be amazing if one day all consenting adults could be free to love who they want to without fear of persecution?

So, with Friday night periodically being 'music night' here at The Wild Reed, here for your listening and viewing pleasure is Autoheart with "Moscow." Enjoy!