"This Doesn't Happen to White People" 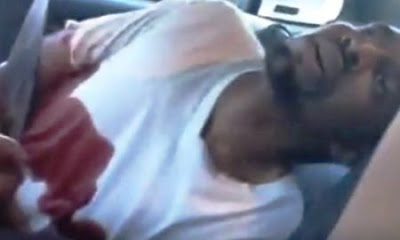 In the last 24 hours I've watched two different videos online that depict two separate incidences of a black man bleeding to death after being shot by police.

As you can imagine, both videos are extremely difficult to watch. Yet watch them I did as I don't want to turn away from the deadly and endemic violence inflicted on black men by law enforcement in the U.S. 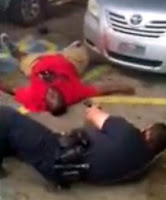 The first video shows the shooting death of Alton Sterling (left), who was shot in the chest and killed by police in Baton Rouge, La. in an incident that's already being investigated by the Department of Justice.

And just last night here in the Twin Cities, Philando Castile, a 32-year-old cafeteria supervisor at JJ Hill Montessori School in St. Paul, died after being shot by police in the St. Paul suburb of Falcon Heights. Moments before being fatally shot, Castile had been pulled over in his car for having a broken taillight.

The immediate aftermath of Castile's shooting was video-recorded and live-streamed to Facebook by Castile's girlfriend, Diamond Reynolds, as she sat in the car next to him. The image that opens this post is from this gut-wrenching video.

The graphic video from Minnesota showed Philando Castile, 32, who had been shot several times, slumping against the woman who was recording the scene. As she did so, her 4-year-old daughter sat in the back seat and an officer stood just outside the driver’s side window, still aiming his gun at the mortally wounded man at point-blank range.

The video is all the more shocking for the calm, clear narration of the woman, Diamond Reynolds, who can be heard saying that Mr. Castile had done nothing wrong, and the fact that she streamed it live on Facebook. On the video, Ms. Reynolds gives her account of what happened, saying again and again that Mr. Castile was just reaching for his driver’s license and registration — as the officer had requested — when the officer opened fire.

“Please, officer, don’t tell me that you just did this to him,” she said. “You shot four bullets into him, sir. He was just getting his license and registration, sir.”

Ms. Reynolds’s daughter appears several times in the video. Near the end of the 10-minute clip, as the two are sitting in the back of a police car and Ms. Reynolds becomes increasingly distraught, the girl comforts her mother. “It’s okay, Mommy,” she says. “It’s okay. I’m right here with you.”

Later this evening I'll be attending a march, rally and prayer vigil for Philando Castile at JJ Hill Elementary School in St. Paul.

For now I'll share the following reflection by Julie Kearns, one that came to my attention on Facebook earlier today. It sums up well my thoughts and feelings on yet another tragic shooting of a black man by police. 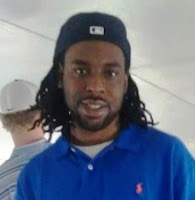 Phil Castile worked with kids at Saint Paul public schools. He was known by his young charges – and their grown-ups – for knowing first names, connecting effectively with students, and giving great fist bumps.

While seated in a car that had been pulled over for having a broken taillight earlier tonight, he was instructed to show the officer his ID.

He explained that he was licensed to legally carry a concealed weapon before reaching for his drivers license. He was subsequently shot four times by the officer who asked to see his ID.

This doesn't happen to white people.

His girlfriend, after witnessing the shooting, was ordered out of the car and onto her knees, and then handcuffed in front of her young daughter while her boyfriend bled out.

Today, a white guy walked into a Target in Edina with a gun holstered below his armpit, presumably to protect himself while shopping, with no adverse effects (except a friend's covert documentary photograph).

This is just one simple way in which white people experience privilege: we don't wind up disproportionately dead for doing things that we should reasonably be able to do without getting shot at by local law enforcement (like be a passenger in someone's car – or play with a toy gun – or sell CDs outside a shop with the permission of the shop's owner). 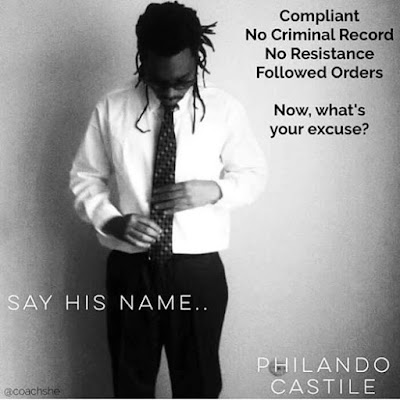 NEXT: Remembering Philando Castile
and Demanding Abolition of the System
That Targets and Kills People of Color

See also the previous Wild Reed posts:
• Quote of the Day – March 31, 2016
• Something to Think About – December 29, 2015
• Quote of the Day – November 25, 2015
• "We Are All One" – #Justice4Jamar and the 4th Precinct Occupation: Photos, Reflections and Links
• An Update on #Justice4Jamar and the 4th Precinct Occupation
• Rallying in Solidarity with Eric Garner and Other Victims of Police Brutality
• "Say Her Name" Solidarity Action for Sandra Bland
• In Minneapolis, Rallying in Solidarity with Black Lives in Baltimore
• Thoughts on Prayer in a "Summer of Strife"

Title is not true. It does happen to white people, its just much less frequent and not reported as heavily by the American media.
A white guy with an air rifle was gunned down in the hallway of a hotel and it got very little attention. He didnt even have the gun on him. Somebody saw it and called 911.
Our problem with bullies getting badges is one that every American needs to worry about, and no president or even a governor has done anything about it. Of course its gotten worse under president Cheeto.

This artcle clearly spells out who is.

"A 2019 study from Rutgers University published in the Proceedings of the National Academy of Sciences supported those findings: Police violence was found to be a leading cause of death of young men in the U.S., with Black men 2.5 times more likely to be killed by law enforcement than white men."