With "Around," Russell Elliot Tells It Like It Is 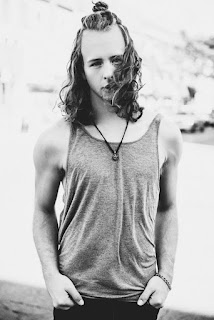 This evening for "music night" I share the video for singer-songwriter Russell Elliot's song "Around."

Elliot is a 23-year-old D.C.-raised, Brooklyn-based R&B singer whose voice, says Out magazine, "has a depth and maturity that belies his youth."

"My mission is to tell it like it is," says Elliot, "to create authentic, powerful music out of my lived experience and worldview.”

He definitely accomplishes this mission with "Around," about which Elliot says:

The song is about a boy I met in college. He wanted me but not meaningfully. He wanted me but not as badly as he wanted heteronormativity, or privilege, or comfort. "Around" is the confrontation I couldn't bring myself to address in the moment. Frankly, it's the "go fuck yourself" I never gave him in person.

When interviewed last November by The Huffington Post, Elliot shared more about what was clearly for him a formative experience.

Falling for a straight boy is hard. When he likes you back, but has no accessible way to act upon those feelings without betraying his heteronormative identity, things get messy. I fell for a boy in college who wanted me behind closed doors and wanted the rest of his comfortable straight life on the other side of that door partying with the "normal" kids. This video is me finally saying what I should have from the jump: you can't have it both ways. 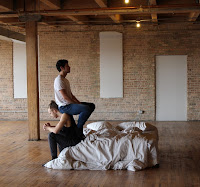 Hmm . . . It's an important and helpful message, to be sure. But what I most appreciate about the video for "Around" is its dancing.

As you'll see, it's dance that is both startlingly visceral and hauntingly beautiful. Given the experience that inspired "Around," this isn't surprising.

I'm impressed that Elliot is not only a talented songwriter and singer but a dancer as well. But again, given the personal nature of the song's story, it's not surprising that he imbues his dancing with such passion and conviction. Elliot's dance partner, Alonso Guzman, is also an exceptional and sensitive dancer. The pair's dance is creatively choreographed by The Kuperman Brothers, Rick and Jeff, an acclaimed directing and choreography team for both stage and screen.

See also the previous Wild Reed posts:
• A Beautiful Collaboration
• Five Takes on Five Dances
• Gay Men and Modern Dance
• Quote of the Day – May 9, 2010
• The Soul of a Dancer

Labels: Dancer and the Dance, Music