A Visit to the Art Gallery of New South Wales 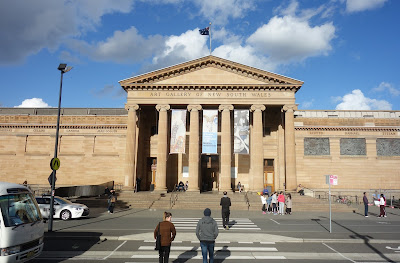 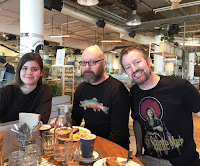 My first day back in Australia (Tuesday, July 11) was also my younger brother's birthday. We celebrated by enjoying brunch at the Coogee Pavilion (right) and then catching a bus to The Domain area of Sydney to visit the Art Gallery of New South Wales (above).

Following are a few more pics from that day. 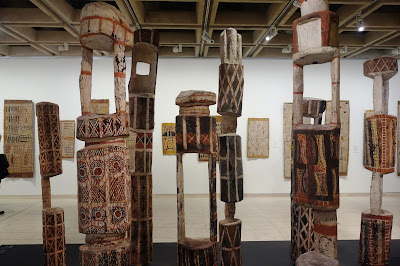 Above: A number of bark paintings in the Aboriginal and Torres Strait Islander collection. Notes the Gallery's website about this collection:

Representing artists from communities across Australia, the Art Gallery of NSW’s collection of Aboriginal and Torres Strait Islander art celebrates Indigenous Australia’s enduring cultural heritage and its myriad contemporary expressions. The earliest work in the collection, by Tommy McRae, dates back to the late 19th century, yet the stories, ceremonies and ancestral beings depicted in many of the works are testament to the oldest continuous culture in the world. From desert paintings created by small family groups living on remote Western Desert outstations and the bark paintings of the saltwater people of coastal communities to the new media expressions of ‘blak city culture’, contemporary artists have generated a renaissance of Indigenous visual art that has transfigured Australia’s cultural landscape. 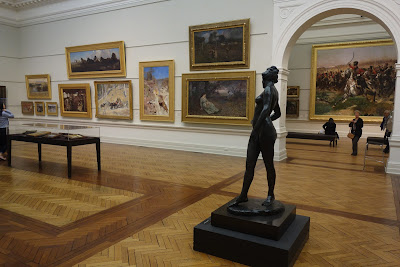 Above: The Gallery's collection of Australian art is said to be amongst the finest and most representative in the country. Dating from the early 1800s, it includes many iconic paintings and sculpture.

One of a number of famous artworks by non-Australian artists at the Gallery is "Vive L'Empereur!" (1891) by French artist Édouard Detaille (at far right in the image above). 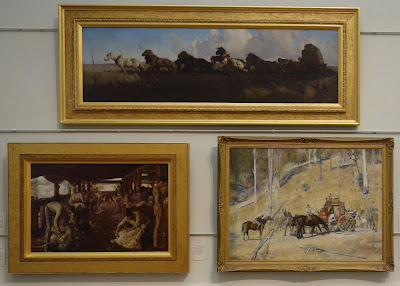 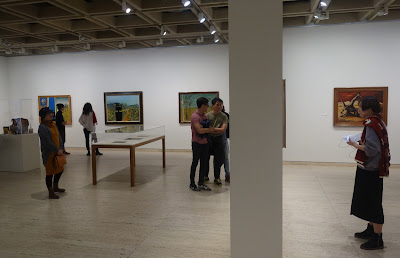 The painting second from left above is from Sidney Nolan's famous series of stylised descriptions of the Australian bushranger Ned Kelly. Notes Wikipedia:

Nolan's Ned Kelly series follow the main sequence of the Kelly story. However Nolan did not intend the series to be an authentic depiction of these events. Rather, these episodes/series became the setting for the artist's meditations upon universal themes of injustice, love and betrayal. The Kelly saga was also a way for Nolan to paint the Australian landscape in new ways, with the story giving meaning to the place. 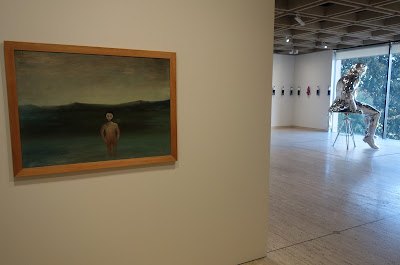 Above: Another painting by Sidney Nolan in the Art Gallery of New South Wales is "Island" (1947). 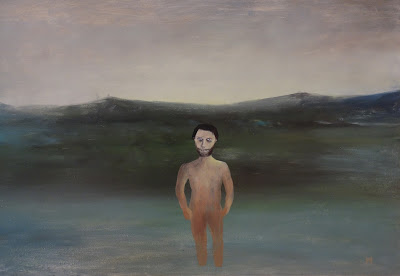 Says the Gallery about this work:

This bold composition, in which an isolated male figure has been placed in the dead centre of an empty seascape fringed with soft hills set against a pale violet sky is one of Nolan's most haunting images of the late 1940s. It is based on his visit to Fraser Island in North Queensland, which he visited in 1947, partly to investigate the accidental death of his brother Ray in Cooktown two years earlier.

Nolan read about the story of the shipwrecked Englishwoman Eliza Fraser, who became stranded amongst local Aborigines and was rescued by escaped convict David Bracewell, and painted a series pertaining to the narrative. [NOTE: It was actually the convict John Graham who "rescued" Fraser. Also, Fraser was not captured by the Badtjala people, as many accounts state, but rather taken in by them.] The figure could represent Bracewell, Nolan himself, or perhaps the ghost of the artist's brother. However, the abiding existential mood of this remarkable work transcends local legend, lifting it into the realm of metaphor about the fundamental condition of individual humanity. 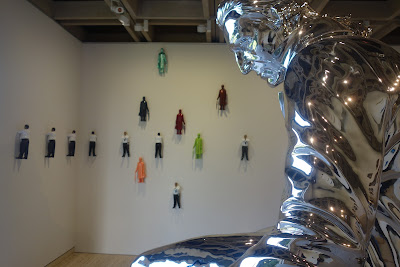 Above: Detail of "The English Channel" (2015), a sculpture of Captain James Cook by New Zealand artist Michael Parekowhai.

Notes the Gallery about this work:

Larger than life and created from highly polished steel, Michael Parekowhai’s "The English Channel" is an arresting sculptural presence. The figure, with flowing topcoat and ponytail, is the British navigator Captain James Cook. But this is not Cook as he is seen in the many historical monuments that bear his name – or in the famous 1776 portrait painting by Nathaniel Dance which is one inspiration for this sculpture. Resting on a sculptor’s working table with his feet suspended above ground, this Cook seems to be reflecting on his legacy in the contemporary world. At the same time, his dazzling surface collects the reflection of everything around it – including viewers looking at it. Despite the sculpture’s considerable height and weight, this mirror-like surface lends "The English Channel" a slippery and elusive presence, as if to suggest how perceptions shift depending on where one is standing. This charged relationship with place was heightened, in the sculpture’s debut presentation in Sydney, by its physical location within the Gallery, in front of windows overlooking the harbour that Cook sailed past in 1770. The result is a monument of a very contemporary kind – not a full stop marking the end of a story but a question mark inviting response and reflection. 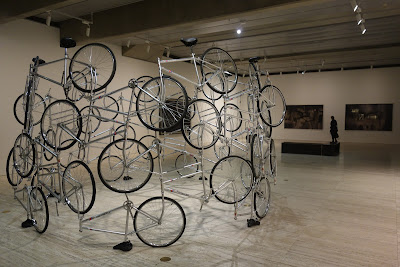 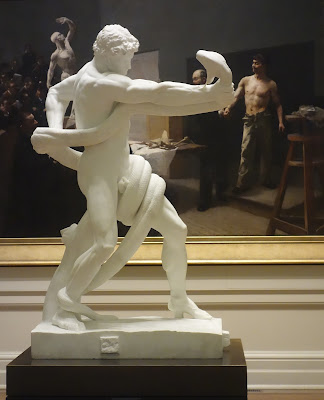 Above: "An Athlete Wrestling with a Python" (1888-1891), a white marble sculpture by Frederic Leighton. Behind this sculpture can be seen "The Anatomy Class at the École des Beaux Arts" (1888) by François Sallé. 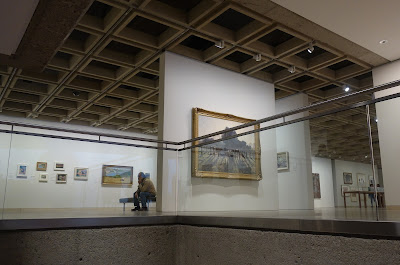 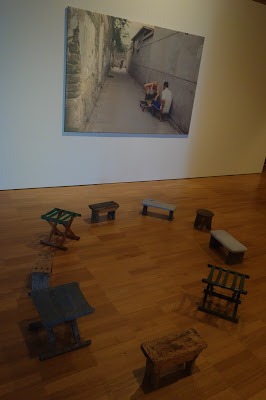 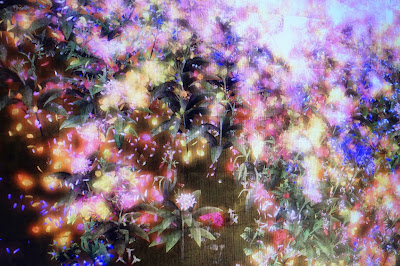 ‘Flowers and People - Gold’ was inspired by a visit to Kunisaki Peninsula in the spring, a time when cherry blossoms and rape blossoms were in abundance around the mountains. . . . The animated installation work shows flowers that gradually bud, blossom, grow and appear from all areas of the screen. Once a viewer steps close, (and is detected by sensors) the flowers start to wither away and die. A cycle endlessly continues, revolving around the coming to life and then the gradual decay that eventually leads to death. The interaction between the viewer and the installation fuels the work, continually changing the animated states that cannot be replicated. It is the viewer’s presence that prompts the cycle the flowers will take. 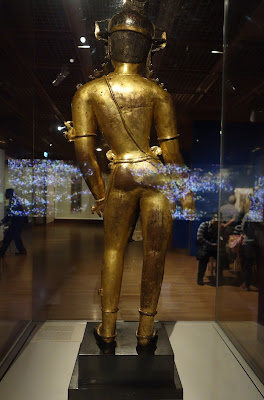 Above: The lights of "Flowers and People - Gold" reflected in the glass case surrounding "Padmapani," a 13th-century Nepalese sculpture in the Gallery's Asian art collection.

Right: Another view of "Padmapani." 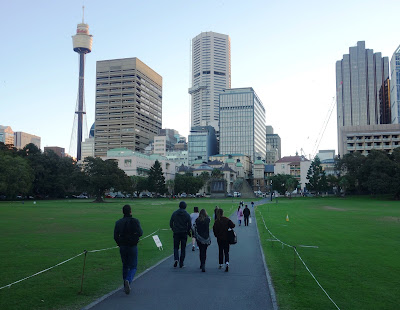 Above: Walking back across The Domain from the Art Gallery of New South Wales to the central business district (CBD) of Sydney. 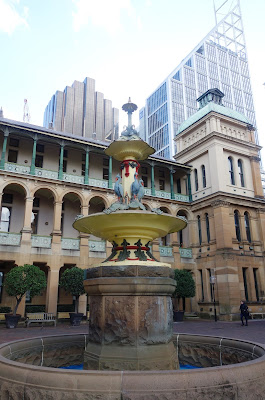 Above: Sydney Hospital, the oldest hospital in Australia, dating back to 1788, and at its current location since 1811. 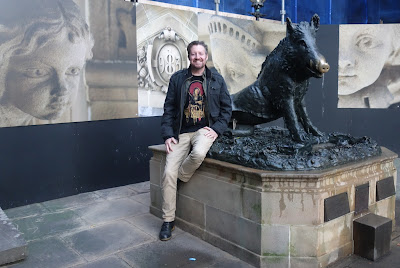 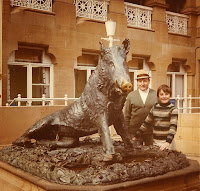 Above: On the Macquarie Street side of Sydney Hospital is Il Porcellino, "the little pig," a larger than life-sized bronze wild boar. It's an exact replica of an original by Pietro Tacca which has stood in Florence, Italy, since circa 1633.

Left: Standing by the same statue with my father, Gordon Bayly, in 1980. 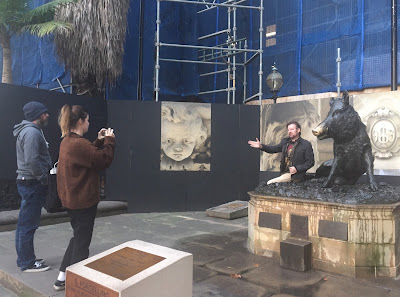 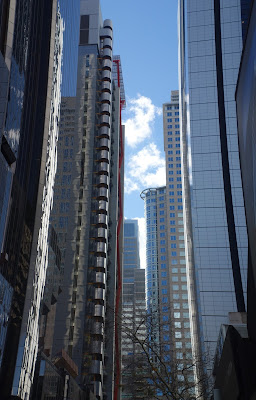 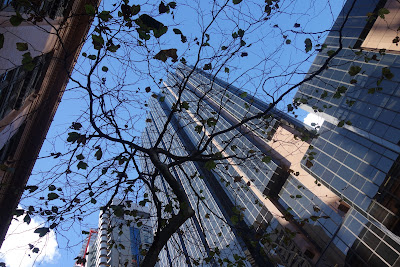 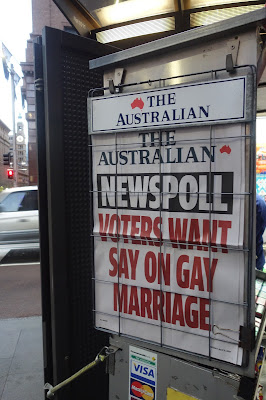 Above: Yes, believe it or not, marriage equality is yet to come to Australia.

On the same day as The Australian newspaper story, The Daily Telegraph also reported on how, "according to a special Newspoll, more Australians now support a popular vote on same-sex marriage than holding a free vote in parliament." To read this story, click here.