Donald Trump: A View from Australia

As my winter sojourn in Australia continues I must say it's been strange watching the news here and seeing, day after day, officials from my other home in Minneapolis, MN being interviewed, including Governor Mark Dayton, Mayor Betsy Hodges, and, as of today, ex-Police Chief Janee Harteau. They and regular city residents have been in the news owing to the police shooting death of an unarmed Australian woman, Justine Dumond, who had been living with her American fiancée in a neighborhood close to where I live in south Minneapolis. People here simply can't understand how Damont came to be shot. They also can't fathom the related issue of the U.S. gun culture, one which, as a recent Vox article notes, makes police officers more fearful and thus "more likely to anticipate and perceive a threat and use deadly force as a result." 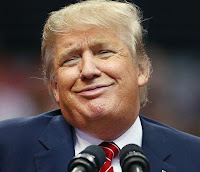 Talking to people and listening to various talk show programs, I've discerned that another aspect of the current scene in the U.S. that most Australians are both alarmed and baffled by is Donald Trump. How did such a man even get elected president? Why hasn't he been impeached yet? I hear these questions a lot.

I've actually come across only one person in Australia who openly supports Trump, and that was during my last visit home, last May, when Trump was not yet president but only a candidate. The person who expressed enthusiastic support for Trump was the Kenyan-born husband of a former student of mine. In talking to this young man I discovered that he supported Trump because he saw him as a "strong man," as that type of authoritarian leader that by sheer force of personality and his anti-democratic actions brings order, or at least the appearance of order, to societies experiencing political and economic upheaval. Perhaps this had been this young man's experience of government in Kenya: a "strong man" in power bringing order to a society experiencing chaos. I can't say for sure.

Regardless, my response to him was to acknowledge his concerns about the socio-economic turmoil he rightly sensed was taking place in various parts of the world, including the U.S., and to suggest that a better way of responding to such turmoil wasn't to embrace "strong men" representing ideologies of nationalism, racism and/or fascism, but rather to build an authentically democratic and progressive movement dedicated to economic and social justice. Of course, I then introduced my friend's husband to Bernie Sanders, and I'm happy to say that he said he would look into his political platform. Now, whether or not he did and had a change of heart as a result, I can't say. I dare say I'll find out during this trip home.

In the meantime, I share the editorial from today's The Sydney Morning Herald, one that I believe reflects the majority of Australians' view on Trump, his administration, and his political agenda.


Healthcare Fail a Sickness of Trump's Government
As he prepared for the D-Day landings, General Dwight Eisenhower, who would later become US president, wrote a note for publication should the Allied invasion of German-occupied Europe fail. "If any blame or fault attaches to the attempt, it is mine alone," it said.

President Harry Truman had a sign on his desk that read simply, "The buck stops here."

The repeal of Obamacare has been the Republican Party's single greatest policy objective for seven years. It has had that long to work on a viable alternative. In the six months since the election, Republicans have hastily drafted two alternative replacement bills, one from the House, another from the Senate.

The House bill is not even a true healthcare act, rather a raft of tax cuts for the wealthy paid for by the abolition of healthcare for the poor. A nonpartisan government analysis has concluded it would leave 22 million more people without health insurance.

The proposals have proved so politically toxic, commonly polling at around 20 percent, that they cannot even command overwhelming support among Congressional Republicans. Meanwhile, polling suggests Obamacare is more popular than it has ever been.

Mr Trump has shown little interest in campaigning for either bill, and now he plans to white-ant Obamacare until it collapses with no plan to replace it. This is what he means when he says he will not "own it".

It is a response to a political failure that betrays not only a staggering disregard for the wellbeing of many of his fellow citizens, but a staggering political naivete. He is the president. He owns it.

– The Editorial Board
The Sydney Morning Herald
July 21, 2017

The only real parallel to Trump (and the family) is Pope Alexander VI Borgia, elected 1492, and his notorious family.

The international perspective is always interesting. We in the rest of the world simply do not understand the dynamics which led to Trump, or the political dynamic he fosters. We want our old neighbour back!