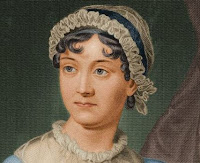 Today marks the 200th anniversary of the death of English novelist Jane Austen (1775-1817). Here in Australia a number of special events are taking place to honor and celebrate the life and works of Austen, including a display of rare editions of her books at the State Library of New South Wales, a keynote speech at the University of Sydney by Austen expert Professor Devoney Looser of Arizona State University, and a high tea at Curzon Hall hosted by the Jane Austen Society of Australia. 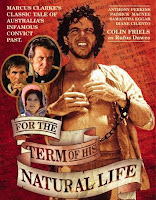 Many of my favorite stories, as books and/or films, are set during England's Georgian era (1714-1830), the time in which Austen lived. Among these is the 1996 film adaption of Austen's 1817 novel Persuasion. Others include Winston Graham's Poldark series of novels; Tolstoy's War and Peace; the tale of Jean Valjean in Les Misérables; Jane Campion's film Bright Star, about the poet John Keats; and the book I've just started reading during my current visit home to Australia, For the Term of His Natural Life by Marcus Clarke. It's a novel that, more than any other, is said to define Australia's convict past (1788-1868). 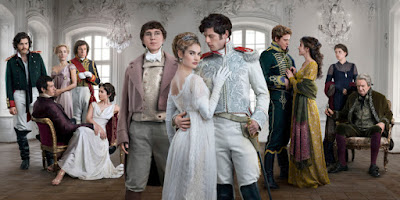 Above: The cast of the BBC's 2016 adaptation of War and Peace. Although set in Russia, Tolstoy's sweeping saga of love, war, betrayal and redemption takes place at the same time as England's Regency era (1795-1837), which is considered to be the last part of the Georgian era. 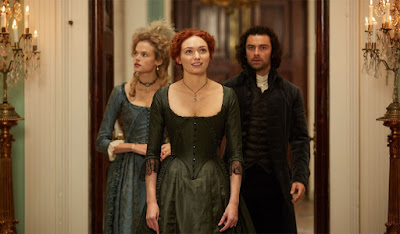 Above: Gabriella Wilde as Caroline Penvenen, Eleanor Tomlinson as Demelza Poldark, and Aidan Turner as Ross Poldark in the BBC's latest adaptation of Winston Graham's Poldark novels. Graham's series of historical novels is set in England during the Regency era, with the twelve Poldark novels covering the period 1783-1820. 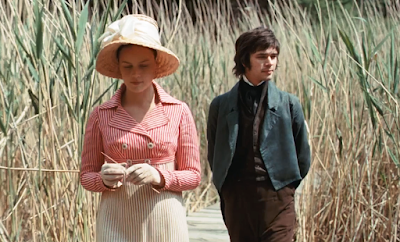 My attraction to and interest in the Georgian era is no doubt influenced by certain artworks from my childhood. In the hallway of my childhood home in Gunnedah, for example, hung a framed print of Thomas Lawrence's "The Red Boy" (1825). Lawrence is often considered the "Romantic portraitist of the Regency," and his portrait of the young Charles William Lambton is one of my earliest memories. It remains to this day in the home of my parents – though that home is now in Port Macquarie, not Gunnedah. 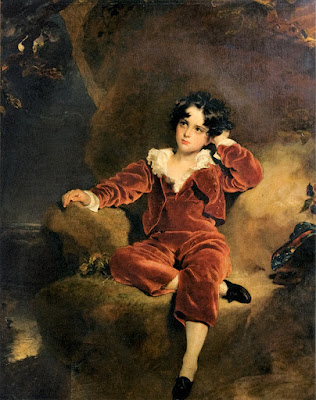 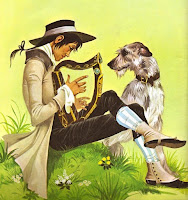 Also, when I was a child I had a book of nursery rhymes illustrated by Janet and Anne Grahame Johnstone. Their drawings featured adults and children in the fashions of the Georgian era (left), perhaps because many of the nursery rhymes included in the book were written during this time.

Finally, growing up in the 1970s in Australia (which, remember, was and remains part of the British Commonwealth) many everyday items – from tins of chocolates to money – featured images of people in Regency-era attire, the same era in which Jane Austen lived and about which she wrote in her novels. 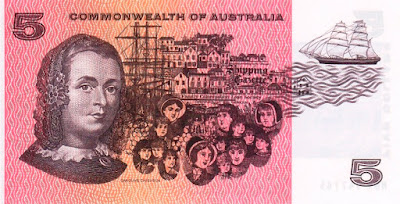 Which brings us back to the main point of this post! . . . In yesterday's Sydney Morning Herald Linda Morris offered an insightful commentary on how and why Jane Austen is relevant to Australia – both during her lifetime and today. Following is an excerpt from Morris's article.

Be they :pompous , the stupid, the self-serving, the snobbish, the superficial and less often the sensible and altruistic."

It is Austen's ability to create characters recognizable in contemporary society – to "dissect human nature with the skill of a surgeon" – that marks her genius, said Brunton, and one reason among many to observe the 200th anniversary of the author's death [today].

While the cause of Austen's untimely death in Winchester on July 18, 1817, is disputed, a series of public events have been planned to celebrate the life and works of the novelist who wrote three classics of English literature before the age of 25.

"All those first generations of free white settlers were coming from that same milieu, that same background of genteel society, and really looking to recreate the ideals of that society in Australia," Riley said.

"People like Lachlan Macquarie and the Blaxland family and all those early settlers were trying to recreate Austen's world."

Governor Macquarie, Riley said, embodied Austen's idea of the self-made military gentleman – "one of those far more noble characters you see in books like Persuasion where you leave home, you have to take risks, go off to foreign places in order to have a profession and a career and advance yourself for the benefit of your family."

"It was determined that Elizabeth, who was a cousin, would make him an excellent wife and companion to come out to Australia. They brought a social calendar. . . . They did a lot of work to gentrify and normalise society away from just being a prison colony."

Governor Bligh's daughter Mary Putland was another figure of Australian history who modelled some of Austen's feisty female characters.
"She came out here, lost her husband early when she arrived here, he passed away from tuberculosis, the mother did not come out with Governor Bligh so she became the lady of the colony." Riley said.

The Regency fashion of sheer empire line gowns was readily adopted and Putland was a trendsetter. She set the colony alight when she wore long drawers and walked into church with her undergarments visible about her ankles.

NEXT: Donald Trump: A View from Australia

See also the previous Wild Reed posts:
• A Beautiful and "Quietly Remarkable" Adaptation of Jane Austen's Persuasion
• Dreaming of Spring
• Dew[y]-Kissed
• Return of the (Cornish) Native
• Anyone for Tea?