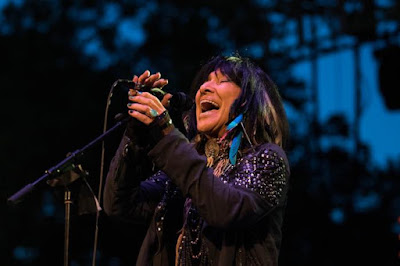 NOTE: For the first installment of this series, click here. For my photographs of Buffy in concert in Minnesota and Wisconsin last summer, click here.

Three aboriginal performers including Iskwé, A Tribe Called Red, and Buffy Sainte-Marie brought a diverse crowd of some 3,000 to New York City’s Rumsey Playfield in Central Park on July 9 for a free concert.

“You got a whole lot of Canadians here, eh?” Buffy Sainte-Marie jokingly asked the crowd when she took the stage after Iskwé and A Tribe Called Red.

She had the crowd on their feet and swaying to songs like “Up Where We Belong,” “Starwalker,” and “The War Racket.”

Buffy Sainte-Marie talked about activism and instead of war having a school to teach alternative conflict resolution before singing her song “Universal Soldier.”

She got the crowd going speaking the lyrics to “Carry It On.” She asked the crowd “Are you here to improve?” And reminded everyone that “We’re only here by the skin of our teeth as it is.”

. . . Even though having all three of these performers on the same stage may seem like a stretch because they all sound so different, the crowd loved it. As people were leaving, many noted how amazing the show was.

“Buffy Sainte-Marie is an artist I first saw perform live in a church in Montreal several years ago, and I have wanted to bring her to SummerStage ever since, not specifically because she is a pioneering indigenous voice, but simply because she is an amazing musician and performer,” City Parks Foundation Executive Artistic Director Erika Elliott told ICMN.

“The rest of the line-up then evolved organically to include other indigenous voices, because all were acts we wanted to have in the SummerStage season. A Tribe Called Red has been a favorite of mine for years now as well, and I had struggled to find the right show to have them on. Once I confirmed Buffy Sainte-Marie, it honestly seemed like a stretch sonically to book them on the same bill, but after talking with all and knowing Buffy and A Tribe Called Red both liked the idea, we moved ahead,” Elliott said. “I gauge response by crowd response, and the night was really well-received by everyone in attendance, especially since the audience was so diverse.”

It certainly was a diverse evening to remember. Even Buffy Sainte-Marie commented that the only Canadian aboriginal musician missing was Tanya Tagaq.

Following is a 2010 performance by Buffy and her band of her song "Starwalker."

NEXT: Buffy Sainte Marie, "One of the Best
Performers Out Touring Today"