Buffy Sainte-Marie, "One of the Best Performers Out Touring Today" 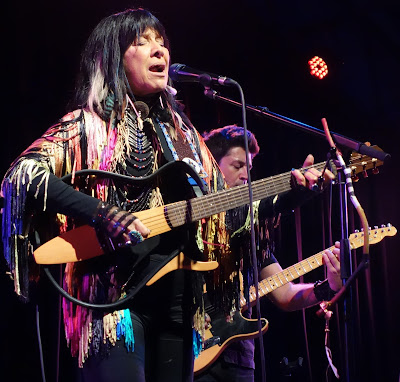 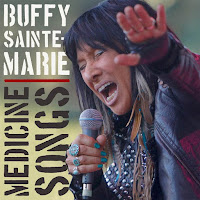 A definite highlight of my birthday last Monday was the announcement of the release date for Buffy Sainte-Marie's new album, Medicine Songs. The album will be released Friday, November 10 . . . and, about it, Buffy says the following.

This is a collection of front line songs about unity and resistance – some brand new and some classics – and I want to put them to work. These are songs I've been writing for over fifty years, and what troubles people today are still the same damn issues from 30-40-50 years ago: war, oppression, inequity, violence, rankism of all kinds, the pecking order, bullying, racketeering and systemic greed. Some of these songs come from the other side of that: positivity, common sense, romance, equity and enthusiasm for life. . . . I really want this collection of songs to be like medicine, to be of some help or encouragement, to maybe do some good. Songs can motivate you and advance your own ideas, encourage and support collaborations, and be part of making change globally and at home. They do that for me and I hope this album can be positive and provide thoughts and remedies that rock your world and inspire new ideas of your own.

Back in March I started a special countdown to the release of Medicine Songs. (I did a similar series of posts in the lead-up to the May 12, 2015 release of Buffy's Power in the Blood album.)

The Wild Reed's special countdown to Medicine Songs continues this evening with the sharing of Sarah Green's review of a performance by Buffy and her band at The Northern Lights in Sudbury, Ontario this past July.

Having seen Buffy twice last year in concert, I have to say that Green does an excellent job in conveying the energy, relevance, and musical scope of a live performance by the legendary Buffy Sainte-Marie.

Simply put, Buffy Sainte-Marie is one of the best performers out touring today. The fact she's in her late 70s just makes her more of a wonder: a sexy, political rocker of a grandmother whose songs are suited to updating, brushing off and reusing, and who's a joy to watch rocking out on stage leading a band of men who may be half her age but seem more like contemporaries.

The Northern Lights crowd was treated to an intimate, typically career-spanning set of 15 tunes, showcasing the breadth of time, emotion and genre Sainte-Marie likes to traverse. She began with "It's My Way," also the opening song off of 2015's Polaris Music Prize-winning Power in the Blood, then played "You Gotta Run," her recent collab with fellow Polaris winner Tanya Tagaq. After that it was fan favourite "Darling, Don't Cry" off of 1996's Up Where We Belong.

But it may have actually been Buffy's between-song stage banter that was most spot-on, as every time she introduced a tune she framed it in a way that gave depth to its meaning and revealed her inspiration, whether it was a throwaway comment like, "this rainbow hippie campfire song just had one line that was repeating so I gave it more lyrics" ("We Are Circling") or the story she told about walking with her father in Regina when he said, "daughter, they oughta leave the moon alone" – it provided the roots for "Generation."

Her 1964 hit "Universal Soldier" is a set staple for good reason; people gathered in close to hear Buffy play it solo, and hung on every word. But it's another acoustic song, 1965's "Until It's Time For You to Go," with its truth and elegance, that gets me every time, and it was no different here. On a more light-hearted, rockier note, Buffy and the band played a "ZZ Top re-write" called "Bad Bad Ladies Who Ride" – if lyrics aren't feminist enough for you, she seemed to figure, just re-write them.

Sainte-Marie spoke of Power in the Blood as being a more feminine, non-violent form of power, and offered a differentiation between protest songs and "activist" ones – activist songs, Buffy explained, offer solutions. On that note, she played "The War Racket," off her forthcoming new album (due out this fall), which will be an "activism album." Buffy's new material is more of a jumble of a lot of overlapping issues; it doesn't have the direct simplicity of Sainte-Marie's '60s songs, but then again, it's a different time.

After an encore of "Carry It On," Buffy and the band left the stage over the beat of a pow wow drum, with drummer Michel Bruyere [left], who'd been dancing in his seat throughout the set, leading the dance.


Following is a 2013 performance by Buffy Sainte-Marie and her band of the song "Cho Cho Fire" (from Buffy's 2009 album Running for the Drum). Enjoy!

Ooo, you better wake up
Man, it's like you're dead and gone
See you movin' around the same ol' neighborhood
Same ol' thoughts in your head spinning 'round and around-'round

Oh, I know that you're a city boy
But if you got a chance to go - ah-ah
Would you come out to a new world
I promise that I'll take it slow - ah-ah

Look like you're burnin' out to me, babe
No good to nobody no how - ah-ah
Think you need a new experience
Need a little pow-wow in your soul - ah-ah

See the people get excited
They know the best is yet to come
You can see the people gatherin from miles around
See 'em running for the drum - ah-ah . . . 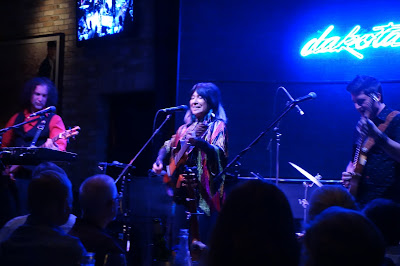 Above: Buffy Sainte-Marie with Mark Olexson (bass) and Anthony King (guitar) performing at The Dakota in Minneapolis, Minnesota on August 26, 2016. (Photo: Michael Bayly)

NEXT: The Music of Buffy Sainte-Marie:
"Uprooting the Sources of Disenfranchisement"