Michael Greyeyes' "Role of a Lifetime" 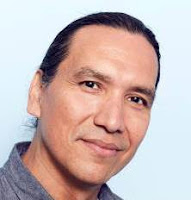 An artist I greatly admire – actor, dancer, and choreographer Michael Greyeyes – is set to portray the Hunkpapa Lakota holy man Sitting Bull in the upcoming film, Woman Walks Ahead.

The film, directed by Susanna White, tells the real-life story of 19th-century artist and activist Caroline Weldon (Jessica Chastain) who in 1889 traveled from New York City to the Dakota Territory to paint a portrait of Sitting Bull. 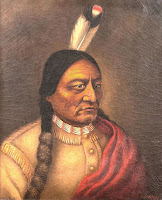 Left: One of four portraits of Sitting Bull painted by Caroline Weldon.

Woman Walks Ahead has been getting decidedly mixed reviews. IndieWire's David Ehrlich opines that "as a self-contained story . . . the film suffers enormously from its slippery grasp of history, all of its narrative thrust slipping through the cracks between fact and fiction." Todd McCarthy of The Hollywood Reporter offers a similar critique, noting that "the story never comes to convincing life and doesn’t, in the end, have anywhere particularly surprising or interesting to go."

McCarthy does, however, concede that Steven Knight's screenplay presents a "plaintive look at a highly unlikely relationship dotted with moments of connection and mutual sympathy." He also writes that Greyeyes ("lithe, tall and handsome") delivers "all that the script allows, which doesn’t include deeper feelings or subtext that would have made the characters more complex."

Katherine Murray, writing for Pop Matters, also takes issue with the film, noting that "it confuses different types of oppression, and seems to propose that people who’ve experienced misogyny are uniquely qualified to understand racism and vice versa. In the process, it glosses over the specifics of each situation in favour of recycling the message that all suffering is the same." 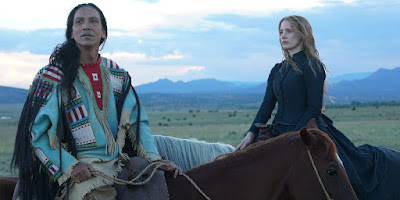 Above: Michael Greyeyes as Sitting Bull and Jessica Chastain as Catherine Weldon in Woman Walks Ahead.

Nicholas Olsen shares a more positive review and, in the process, offers high praise for Greyeyes' portrayal of Sitting Bull.

[Director Suzanne] White keeps the drama taut while positioning it beside a raw aesthetic, perhaps a bit too unpolished. It’s a quiet endeavour with uneasy surges of emotion throughout. Greyeyes’ presence is astounding, overshadowing every inch of the screen when he appears. The larger than life fighter and holy man, forced into submission but his heart still strong and his body physically mangled. He mentions the bullets lodged in his torso and how they dance inside him. Sitting Bull at the end of his run is fascinating, a ghost of the past not yet joining the dance of the dead. 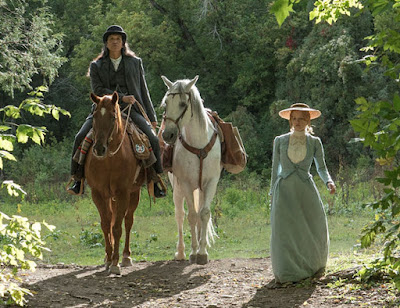 The Guardian's Peter Bradshaw also praises Greyeyes in his write-up of the film, noting that:

Michael Greyeyes . . . is a calm, yet brooding figure as Sitting Bull, almost like Napoleon at St Helena, the great military commander reduced to a quasi-retirement, digging potatoes and accepting a future of farming, rather than hunting ­– on land given on the white man’s say-so. He meets cute with Caroline: she patronisingly tries to address him in a kind of pidgin English, talking about coming over many rivers and valleys to see him. “So – you came here on the New York train?” asks Sitting Bull sardonically. It is an amusing scene. (I wonder if Steven Knight was inspired by the moment in Crocodile Dundee when the native Australian tells Sue that she can’t take his photograph: “You believe it’ll take your spirit away?” – “No you’ve got the lens cap on.”)

This Sitting Bull, so far from being the noble savage condescendingly imagined by the well-meaning white, is in fact a complex leader and savvy operator who agrees to be painted for a $1000 fee, which he in fact returns to Caroline and which she uses to buy their provisions. He also is an artist himself, having drawn autobiographical scenes from his own life. 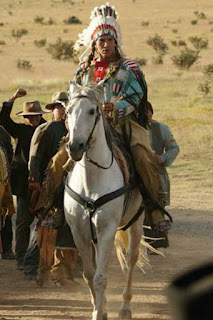 Speaking in an interview with The Hollywood Reporter last month, Greyeyes said the following about his part in Woman Walk Ahead.

It's the role of a lifetime, certainly. And to play a real hero [is really special]. Sitting Bull is a legendary figure and I have an obligation as an indigenous person and as an artist who cares about representation. I'm there to represent a community and a family – his family still lives and Standing Rock is his home. So I felt a huge obligation and responsibility to play him with integrity and compassion.

In another interview, Greyeyes said that he approached playing Sitting Bull in a human – rather than political – way.

[It's a portrayal that] reflects the contemporary understanding of our world and politics, that Sitting Bull was an enemy of the state. . . . I was playing what at the time would have been considered a terrorist. I was really conscious of that because he was a hero to the people. In this case, the state is on the wrong side. That was a really important way in because of the counter-narratives.

I close with a video interview from last year's Toronto International Film Festival in which Michael, co-stars Jessica Chastain and Sam Rockwell, and director Susanna White share their thoughts on Woman Walks Ahead. Enjoy!