The Catalan Firefighters: Listeners of the "Discerning Voice" Within . . . 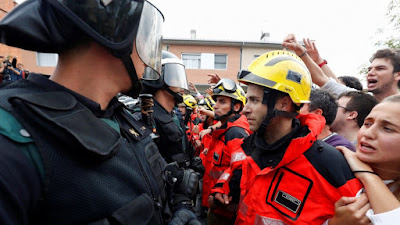 . . . and embodiers of nobility
in the outer world of violence

I was quite moved by images and footage showing the role that Catalan firefighters have played in the recent turmoil around the independence referendum in Catalonia, one of the autonomous communities of Spain. 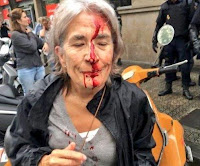 The government of Spain opposes the Catalan self-determination referendum and considers it illegal. The violent clashes that took place this past weekend between Catalans attempting to vote and Spanish riot police sent by the government to stop them, were a dramatic wake-up call to the world on the extent of the constitutional crisis between the Government of Spain and the Generalitat of Catalonia. As many as 800 people have been reported injured in Barcelona and other Catalonian centers.

In the midst of this turmoil were the Catalan firefighters. They were anticipated to play some kind of role after hundreds of them unfurled a massive banner saying "Love democracy" from the roof of Catalonia's history museum just days before the referendum was due to take place. 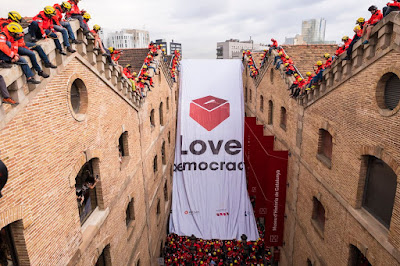 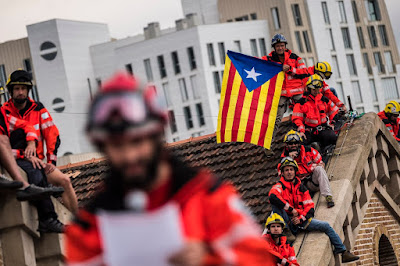 When Spanish riot police began attacking and beating those who came out to vote on October 1, the firefighters formed lines of nonviolent resistance in front of polling stations and the crowds of Catalans who had gathered at them.

This action put the firefighters in direct confrontation with the police. The Associated Press called photographs of this confrontation the "defining images" of the Catalonia referendum, while one Facebook user declared, "This is what real resistance and anti-fascism look like." (It was not the first time, however, that Catalan firefighters have stood up to Spanish police.) 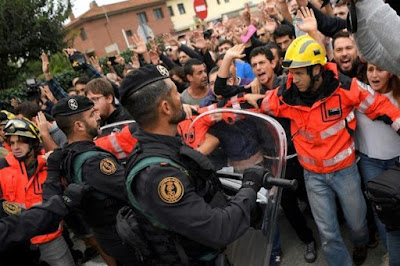 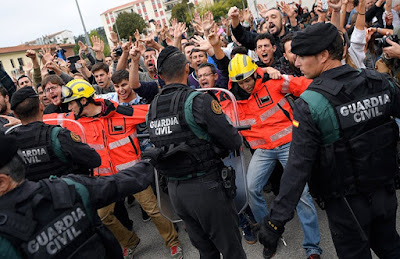 The actions of the Catalan firefighters – and indeed all who nonviolently embody the call for dignity, respect, and freedom – bring to mind the words of the late poet, author, and priest John O'Donohue, and in particular what he once wrote about the "discerning voice" within. When we listen and respond to this voice, O'Donohue said, we are encouraged to be a "sign and presence of a transcendence that no force or horror can extinguish." Furthermore, we can bring "forgotten nobility into an arena where violence has traduced everything."

This "forgotten nobility" is what I see the firefighters of Catalonia embodying.

Following is that part of O'Donohue's book Beauty: The Invisible Embrace in which he writes about the "discerning voice."

Somewhere in every heart there is a discerning voice. This voice distrusts the status quo. It sounds out the falsity in things and encourages dissent from the images things tend to assume. It underlines the secret crevices where the surface has become strained. It advises distance and opens up a new perspective through which the concealed meaning of a situation might emerge.

The inner voice makes complicity uneasy. Its intention is to keep the heart clean and clear. This voice is an inner whisper not obvious or known to others outside. It receives little attention and is not usually highlighted among a person's qualities. Yet so much depends on that small voice. The truth of its whisper marks the line between honour and egoism, kindness and chaos. In extreme situations, which have been emptied of all shelter and tenderness, that small voice whispers from somewhere beyond and encourages the heart to hold out for dignity, respect, beauty, and love. That whisper brings forgotten nobility into an arena where violence has traduced everything.

This faithful voice can illuminate the dark lands of despair. It becomes both the sign and presence of a transcendence that no force or horror can extinguish. Each day in the world, in the prisons, hospitals, and killing fields, against all the odds, this still, small voice continues to echo the beauty of the human being. 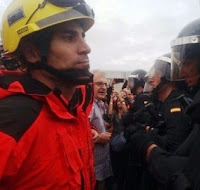 In haunted places this voice carries the light of beauty like a magical lantern to transform desolation, to remind us that regardless of what may be wrenched from us, there is a dignity and hope that we do not have to lose. This voice bring us directly into contact with the inalienable presence of beauty in the soul. 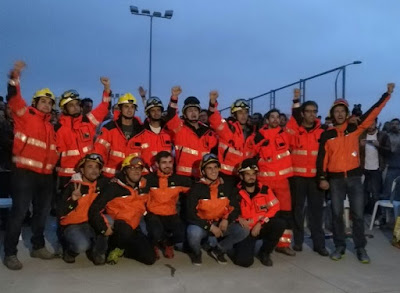