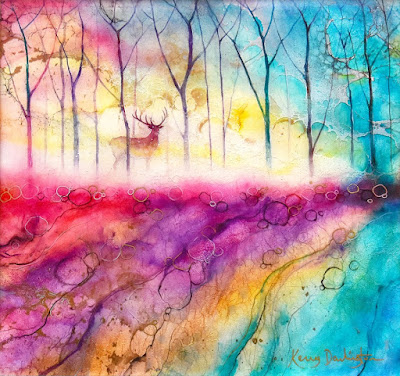 .
I share this evening an excerpt from Loren Cruden's 1998 book, Walking the Maze: The Enduring Presence of Celtic Spirituality. This sharing reflects my growing interest in Celtic spirituality (including Celtic Christianity), which I'm discovering shares many characteristics with other indigenous (i.e., Earth-oriented) spiritual traditions from around the world, most fundamentally the experience of a deep, abiding, and transforming connection with nature.

As with the writings of Frank MacEowen (which I've shared previously at The Wild Reed), Loren Cruden's insights resonate with me as they remind me of – and connect me to – the spirituality of my Celtic ancestors, in particular those on my father's side of the family who hailed from the county of Staffordshire in England.

With all this in heart and mind, here is that part of Walking the Maze in which Cruden shares her thoughts on “the most enduring cornerstone of Celtic spirituality.” 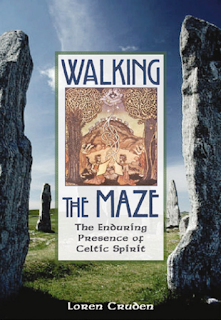 “Have not all races had their unity from a polytheism that marries them to rock and hill?” asked Willie Yeats, quoted by Maud Gonne in “Yeats and Ireland.”

Marriage to rock and hill is perhaps the most enduring cornerstone of Celtic spirituality, despite overlays of Catholicism or Protestantism. Land sense remains primary, in both subtle and concrete forms. Thus, Celtic spirituality is most easily understood if considered within the environmental context of Celtic lands: Ireland, Britain, Scotland, Brittany, Wales, the Isle of Man.

These are places of mists and standing stones, of vivid green luminosity, of wind-haunted moors, treacherous bogs, and sea-battered islands. In this environment it is clear why Celtic reality is a fluid, transmutable affair. The Otherworld is not only an afterlife domain; it is an alternative reality coexistent with the mundane world, ever present. Burial mounds, the ocean, sacred wells, and sidhe mounds are portals to Otherworld reality. In Anne Ross’s words, “The everyday life of the Celts included the supernatural equally with the natural, the divine with the mundane; for them the Otherworld was as real as the tangible physical world and as ever present.” John O’Donohue says, “The Celts had an intuitive spirituality informed by mindful and reverent attention to landscape. It was an outdoor spirituality impassioned by the erotic charge of the earth.”

Fluidity was expressed through many avenues of Celtic consciousness. Knot-work designs – indeed, much of Celtic art – flowed, figures rising out of abstraction, transforming into other shapes, then back into abstraction: strange and complex. Many Celts deities were triple-aspected, the number three and its multiples being considered mystically significant. The soul was seen as a triple spiral, or as a butterfly, moth, or ball of light. Its name in Gaelic, anan, related to anal (breath), signifying a mobile life force having no predestination but reliant on integrity of heart, mind, and soul. Anan abided in the head and hair but moved in blood and breath and could travel into animal or other shape. Also triple were the “releases” of grief, joy, and repose that restored the soul; these were often embodied in Celtic stories by three harp notes or three bird songs.

. . . Ritual and daily life merged for the ancient Celts, with no segregation of place of worship from the land. Both spirituality and life were naturalistic. The priests – Druids – were not peasantry but were nonetheless oriented to the land, not to cities or ostentatious cathedrals. Celts worshiped in groves and at holy lakes, wells, and springs, and what shrines they built were simple, transitory structures or banked earthen enclosures. . . . There is an old Celtic saying that translates thus: “The land of eternal youth is behind the house, a beautiful land fluent within itself. The Gaelic phrase fighte fuaighte, which means “woven into and through each other,” describes this fusion of ordinary and Otherworld realities.

– Loren Cruden
Excerpted from Walking the Maze:
The Enduring Presence of the Celtic Spirit
pp. 81-85 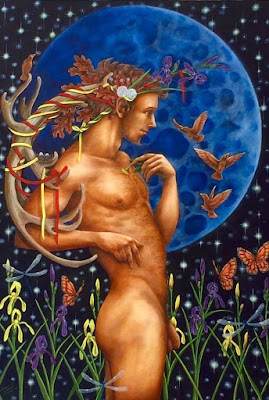 See also the previous Wild Reed posts:
• Mistwalking
• Holy Encounters Where Two Worlds Meet
• The Mysticism of Trees
• The Prayer Tree
• Thomas Moore on the Circling of Nature as the Best Way to Find Our Substance
• “Radical Returnings” – Mayday 2016
• Balancing the Fire
• “I Caught a Glimpse of a God”
• At Hallowtide, Pagan Thoughts on Restoring Our World and Our Souls
• In This In-Between Time
• Cernunnos
• Beloved and Antlered
• Integrating Cernunnos, “Archetype of Sensuality and the Instinctual World”
• Prayer of the Week – November 14, 2012
• Magician Among the Spirits