Celebrating the “Color of Spring” . . . and a Cosmic Notion of the Christ 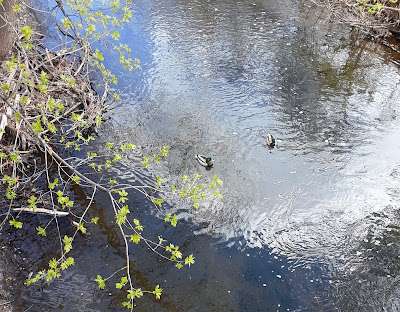 Everywhere – Christ.
Realization of oneness.
Reverence.
Every kind of life has meaning.
Every life has an influence
on every other kind of life.

Yesterday was Independent Bookstore Day, and so after my (much-needed) haircut in Uptown I visited and supported not one but three independent bookstores here in Minneapolis – Magers and Quinn, Present Moment Herbs and Books, and DreamHaven Books, Comics and Art. 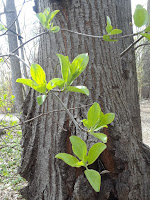 Afterwards, I went to my old south Minneapolis neighborhood by Minneahaha Creek and visited the Prayer Tree. That’s where I enjoyed the scenes of nature honored in the photographs I share today, photographs that capture, in the words of my friend Brian, “New Green – the color of spring.” Indeed!

In sharing my photos today, I accompany them with an excerpt from one of the books I bought yesterday, The Universal Christ by Richard Rohr, in which he quotes the words of artist, writer, and mystic Caryll Houselander that open this post. 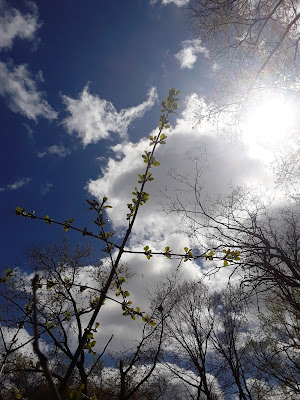 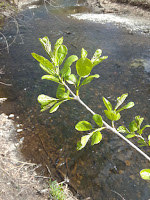 Who wouldn’t want to experience [Caryll Houselander’s life-changing revelation of Christ]? And if Houselander’s vision seems to [most mainline Christians] today somehow exotic, it certainly wouldn’t have to early Christians [nor, in the last 100 years or so, to those within the New Thought movement, often dismissed and maligned as “New Agers.”] The revelation of the Risen Christ as ubiquitous and eternal was clearly affirmed in the Scriptures (Colossians 1, Ephesians 1, John 1, Hebrews 1) and in the early church, when the euphoria of the Christan faith was still creative and expanding. In our time, however, this deep mode of seeing must be approached as something of a reclamation project [one that is taking place both within and outside mainline Christianity]. When the Western church separated from the East in the Great Schism of 1054, [it] gradually lost this profound understanding of how God has been liberating and loving all that is. Instead, [Christians in the West] gradually limited the Divine Presence to the single body of Jesus, when perhaps it is as ubiquitous as light itself – and uncircumscribed by human boundaries.

. . . What if Christ is a name for the transcendent within of every “thing” in the universe?

What if Christ is a name for the immense spaciousness of all true Love?

What if Christ refers to an infinite horizon that pulls us from within and pulls us forward too?

What if Christ is another name for everything – in its fullness?

. . . G. K. Chesterton once wrote, Your religion is not the church you belong to, but the cosmos you live inside of. Once we know that the entire physical world around us, all of creation, is both the hiding place and the revelation place for God, this world becomes home, safe, enchanted, offering grace to any who look deeply, I call that kind of deep and calm seeing “contemplation.”

The essential function of religion is to radically connect us with everything. (Re-ligio = to re-ligament or reconnect.) It is to help us see the world and ourselves in wholeness, and not just in parts. Truly enlightened people see oneness because they look out from oneness, instead of labeling everything as superior and inferior, in or out. If you think you are privately “saved” or enlightened, then you are neither saved nor enlightened, it sems to me!

A cosmic notion of the Christ competes with and excludes no one, but includes everyone and everything (Acts 10:15, 34) and allows Jesus Christ to finally be a God figure worthy of the entire universe. In this understanding of the Christian message, the Creator’s love and presence are grounded in the created world, and the mental distinctions between “natural” and “supernatural” sort of falls apart. As Albert Einstein is supposed to have said, “There are only two ways to live your life. One is as though nothing is a miracle. The other is as though everything is a miracle.” 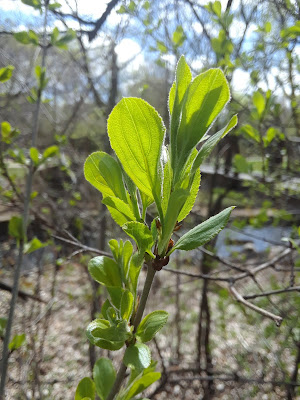 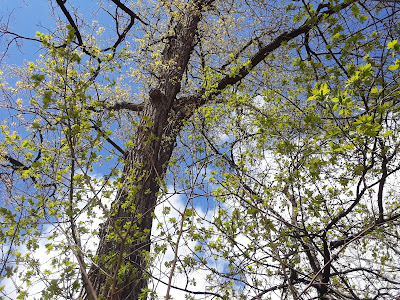 Christ is everywhere.
In Christ every kind of life
has a meaning
and a solid connection.

See also the previous Wild Reed posts:
• Let the Greening Begin
• The Landscape Is a Mirror
• Photo of the Day – April 6, 2021
• Photo of the Day – April 21, 2019
• Welcoming the Return of Spring (2018)
• Celebrating the Return of Spring (2017)
• The Enkindled Spring (2016)
• Green Destiny
• In the Footsteps of Spring
• O Dancer of Creation
• “I Caught a Glimpse of a God”
• The Cosmic Christ: Brother, Lover, Friend, Divine and Tender Guide
• In the Garden of Spirituality: Richard Rohr (Part I)
• In the Garden of Spirituality: Richard Rohr (Part II)
• Michael Morwood on the Divine Presence
• Andrew Harvey on Radical, Divine Passion in Action
• In the Garden of Spirituality: Paul Collins
• An Erotic Encounter With the Divine
• Called to the Field of Compassion
• Divine Connection
• Considering Resurrection
• Prayer of the Week – November 14, 2012