Two Comments on Racism in America . . . and a Perspective on White Solidarity 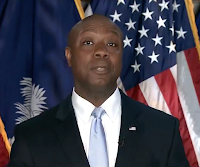 In offering the official Republican party response to President Joe Biden’s recent address to a joint session of Congress, Sen. Tim Scott (right) declared that “America is not a racist country.”

I shared an article about this statement on Facebook, and in response to both it and the overall issue of racial injustice and violence in the U.S., two friends offered the following comments.

The problem is that people don’t intend to act in racist ways even though they do so unconsciously out of habit and the conditioning of centuries. Most Americans do not intend to be racists, but do so anyway through their institutions and systems, and then fail to change them since it benefits them. Part of this is even neurological, the interpersonal neurobiology involved in defining over evolutionary time who is “us” and who is not. It is not just a problem in the US; the same tensions over class and color exist in South Asia and in Africa.

The primary reason we are only now “uncovering” the Tulsa race riot is that deep systemic racism in the US has prevailed from then until now.

We do not even know the accurate number of those murdered in this massacre of Black citizens of Tulsa by white ones.

This is true of one racist massacre after another, including the Elaine massacre in Arkansas.

We don’t know details because, from the outset, there was cover-up of the facts, with the media playing a leading role in the cover-up.

We don’t know details because systemic racism remains deeply embedded in U.S. society — and the Republican party and its adherents are simply lying when they deny today that this is the case.

And here’s something else worth highlighting: words of wisdom (originally shared in 2014) from Minneapolis-based artist, educator and activist Ricardo Levins Morales on what white folks fighting racism is all about. Ricardo re-shared his “perspective on white solidarity” yesterday on Facebook.

White people are taught that racism is a personal attribute, an attitude, maybe a set of habits. Anti-racist whites invest too much energy worrying about getting it right; about not slipping up and revealing their racial socialization; about saying the right things and knowing when to say nothing. It’s not about that. It’s about putting your shoulder to the wheel of history; about undermining the structural supports of a system of control that grinds us under, that keeps us divided even against ourselves and that extracts wealth, power and life from our communities like an oil company sucks it from the earth.

The names of the euro-descended anti-racist warriors we remember – John Brown, Anne Braden, Myles Horton – are not those of people who did it right. They are of people who never gave up. They kept their eyes on the prize – not on their anti-racism grade point average.

This will also be the measure of your work. Be there. No one knows how to raise a child but we do it anyway. We don’t get it right. The essential thing is that we don’t give up and walk away. Don’t get me wrong. It is important to learn and improve and become wise in the ways of struggle – or of parenting. But that comes with time. It comes after the idea of not being in the struggle no longer seems like an option.

One more thing. You may not get the validation you hunger for. Stepping outside of the smoke and mirrors of racial privilege is hard, but so is living within the electrified fences of racial oppression – and no one gets cookies for that. The thing is that when you help put out a fire, the people whose home was in flames may be too upset to thank and praise you – especially when you look a lot like the folks who set the fire. That’s OK. This is about something so much bigger than that.

There are things in life we don’t get to do right. But we do get to do them.

And finally, a Facebook friend recently shared a quote from Ayaan Hirsi Ali, part of which states: "If a white man takes my life tonight, it's going to be national news, but if a black man takes my life, it might not even be spoken of." My friend who shared this did so to question and undermine the Black Lives Matter movement, implying that it only cares about Black people when they are killed by white people, not by other Black people. Here was my response:

If Ayaan, as a Black person, was murdered by another Black person, it wouldn’t be because she’s Black. In other words, racism wouldn’t factor into it. The Black Lives Matter movement is focused on calling attention to and stopping racially-motivated killings of Black people by white people. That’s key in understanding the movement.

Related Off-site Links:
Was Tim Scott Right When He Said “America Is Not a Racist Country”? An Investigation – Michael Harriot (The Root, April 29, 2021).
Ibram X. Kendi: “Being Antiracist Is a Journey, Not a Destination” – Lauren O'Neil (The Cavalier Daily, April 25, 2021).

See also the previous Wild Reed posts:
• The Problem Is Ultimately Bigger Than Individuals. It’s Systemic
• Reacting to the Effects, Not the Cause, of What Ails Us
• Minnesota Governor Tim Walz: “We Need to Make Systemic Changes”
• “And Still and All, It Continues”
• “Let This Be a Turning Point”
• Remembering Philando Castile and Demanding Abolition of the System That Targets and Kills People of Color
• “This Doesn't Happen to White People”
• Quote of the Day – March 31, 2016
• Something to Think About – December 29, 2015
• Quote of the Day – November 25, 2015
• Helpful Rebuttals to Racist Talking Points