“Of Course America Is Racist” 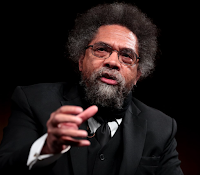 Here’s a good follow-up to my recent post on systemic racism in the U.S. . . .

It’s philosopher, intellectual, and activist Dr. Cornel West being interviewed by Charles Blow on how leading Democrats, including President Biden and Vice-president Harris, are falling over themselves to agree with members of the now neo-fascist Republican party in insisting that “America is not a racist country.”

Cornel West, however, is having none of this nonsense. “Of course America is a racist country,” he tells Charles Blow, before clearly explaining why. He also takes to task Democratic strategist James Carville, who recently declared that the Democratic party has a “'wokeness' problem.” West’s response and his clear defining of what “wokeness” actually means, is spot-on.

I get it that for many white people West’s statement is both confrontational and uncomfortable. After all, that’s how truth often first strikes us – as confrontational and uncomfortable. Yet we shouldn’t allow this truth – or the reactions it can generate – to polarize and paralyze us. Instead, I think we should allow it to motivate us. After all, it’s only when we acknowledge our shortcomings and failures as a society that we can begin the corrective work of justice and healing; begin to create a world where all are valued and all can thrive.

The sad thing is that if [Biden had said that America was a racist country] then the same [Democrats now siding with Republicans] would go with Biden because they’re not fundamentally committed to truth; they’re concerned about the camaraderie within the party. . . . We have to say unequivocally that we’re here to tell the truth, [and] the condition of truth is to allow the suffering to speak. Of course America is a racist country. Of course, after 244 years of white supremacist barbaric slavery and another 100 years of neo-slavery and American apartheid, would we be surprised if America were not a racist country? The point is that we’re less racist [now] . . . But we [still] have to tell the truth.

. . . By “wokeness” all we mean is the sensitivity to the suffering of those people who have been terrorized, traumatized, and hated – that’s Indigenous peoples, Black peoples, Brown peoples, poor peoples, and so forth. And so in that sense, wokeness is just a positive step in trying to keep track with people’s suffering. Now I don’t believe in just staying woke, because if we stay woke we’re going to suffer from insomnia. I believe in being fortified so that wokeness is a moment in our attempt to fortify ourselves to be love-warriors, to be wounded-healers, to be freedom-fighters – all three at the same time. Now for me it’s tied to Jesus running the money-changers out of the Temple, and it’s tied to Shiloh Baptist Church. That’s where I’m coming from. . . . My wokeness is tied to being fortified, because I’m in this for the long run.

See also the previous Wild Reed posts:
• Two Comments on Racism in America . . . and a Perspective on White Solidarity
• “Two of the Most Dedicated and Enlightened Heroes of Present Day America”
• Cornel West: Quote of the Day – December 3, 2020
• The Problem Is Ultimately Bigger Than Individuals. It’s Systemic
• Reacting to the Effects, Not the Cause, of What Ails Us
• Minnesota Governor Tim Walz: “We Need to Make Systemic Changes”
• “And Still and All, It Continues”
• “Let This Be a Turning Point”
• “An Abolitionist Demand”: Progressive Perspectives on Transforming Policing in the U.S.
• Remembering Philando Castile and Demanding Abolition of the System That Targets and Kills People of Color
• “This Doesn't Happen to White People”
• Quote of the Day – March 31, 2016
• Something to Think About – December 29, 2015
• Quote of the Day – November 25, 2015
• Helpful Rebuttals to Racist Talking Points