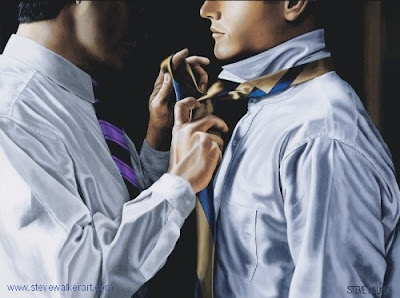 [The notion that committed same-sex relationships
are] atypical, psychologically immature,
or malevolent contexts of development
was not supported by our findings.
Glenn I. Roisman, PhD
American Psychological Association media release
January 22, 2008

The Reuters news agency is reporting on the results of two recent studies concerning same-sex relationships. These results make for interesting reading - though, really, is anyone that surprised? I mean, the upshot is that gay couples are just as capable of being committed as straight couples. It all seems rather obvious to me.

Still, I guess that while ever we have uniformed and discriminatory attitudes and beliefs negatively influencing people’s behavior, society’s laws, and the Church’s teaching on homosexuality, studies like these are important.

Anyway, see what you think, as following are excerpts from Reuters’ report on the findings of these two studies:

Gay and lesbian couples are just as committed in their relationships as heterosexuals and the legal status of their union doesn’t impact their happiness, according to new research. In two new studies that compared same-sex and heterosexual couples using different factors and methods to assess their happiness, scientists found few differences.

“Among the committed couples, there were very few differences that we were able to identify either in terms of how satisfied these couples were, how effectively they interacted with one another or how their bodies responded physiologically while they were interacting with one another,” Glenn I. Roisman, of the University of Illinois at Urbana-Champagne, said in an interview.

In the second study . . . the researchers from the University of Washington, San Diego State University and the University of Vermont found that same-sex couples, regardless of their legal status, were more satisfied with their relationships and reported more positive feelings toward their partners and less conflict than heterosexual married couples.

But gay and lesbian couples not in civil unions were more likely than same-sex couples in civil unions or heterosexuals who were married to end their relationships, according to the study.

Both studies were published in the journal Developmental Psychology.

“My personal view is that I think it’s very hard to make the case as has been made that these same-sex relationships are fundamentally different from opposite-sex relationships in the presence of data like these and other data in the developmental literature,” said Roisman.

For the media release from the American Psychological Association on these findings, click here.

See also the previous Wild Reed posts:
And Love is Lord of All
The Many Manifestations of God's Loving Embrace
Separate is Not Equal
The Changing Face of “Traditional Marriage”
The Real Gay Agenda
Grandma Knows Best
Vermont Mother Tells It Like It Is
Naming and Confronting Bigotry
“Mainstream Voice” of “Dear Abbey” Supports Gay Marriage
What Scientists in the UK are Saying About Homosexuality

Michael, sometimes it takes the validation of something like this by a neutral third party, like the US Census, to really put things into perspectives for a lot of people. I'm sure data in 2010 will bear out what we gay people have always known about the stability of many committed gay and lesbian couples. I, for one, cannot wait to see those results.

This is as wonderful as it is incredible. Despite enormous pressures to the contrary, gay couples are doing as well as straight couples in maintaining their relationships, this despite the fact that the latter receive significant legal, religious and social support for their unions.

Let's see how much the mainstream media reports this little tidbit.

It's a hoax and crap. Neither the subject nor the methods are valid or sound. We relay these false reports at our own expense. Hundreds of thousands died because of them.

With all respects, Gay Species (and I do have a lot of respect for you!), you sound like a rabid anti-gay right winger!

If you’re going to declare these studies invalid, my friend, then at least expand on that contention and share your reasons why.

Specifically, why are these “reports” false, and how are they going to harm people? What previous “false reports” led to the deaths of “hundreds of thousands”?

I have explained on my blog numerous times, most recently:

Psychology is a pseudo-science. It's "methods" are either entirely speculative metaphysics, or the use of induction, which generalizes from the particular, and is widely acknowledged to be unsound and invalid.

The "studies" are at best an opinion poll, with all the attendant biases the question itself, much less the respondent, even worse the interpreter, collates by statistical means. Statistics merely gives standard norms on a bell curve, which merely measures the distribution of answers. Many have used the Bell Curve (e.g., Charles Murray) to insists blacks are intellectually inferior to whites, psychologists once used it to pathologize homophilia.

The same questions posed in the polls today would have had, and indeed DID HAVE, different replies forty years ago, "validating" psychology's claims that homophiles were immensely unhappy individuals, justifying their reparative therapeutics.

Without any doubt, no single psychological theory is testable, therefore incapable of being falsified, and thus never capable of being verified. You and your readers are welcome to enter "psychology" or "ex-gay" or "therapeutic" on my blog's site, which will pull up many examples of the hoax.

Never forget that reparative therapy to cure homosexuals was invented by psychology and used by them even after Hawaii, 1973. Richard Rothstein was pronounced "cured" by his therapist, whereupon he set off to commit suicide in Amsterdam, where by the grace of someone, he saw androphiles enjoying life. Ask him when his "cure" was effected!

Just a minute. Generalizing from particulars is "widely acknowledged to be unsound and invalid"? It is acknowledged to produce only provisionally true generalities, but that doesn't mean inductive reasoning doesn't produce some reliable knowledge.

We would probably agree that it is not valid to generalize too broadly. Haven't you generalized negatively about statistical studies, Gay Species?

You also talk about "psychological theory." Isn't this study more sociological than it is psychological? It is about people reporting to be "happy" and "committed." I don't know how they measured those states of mind. Presumably there would be a way to quantify conflict situations and people's willingness to cope with them, but I'm not up on that. You make the point that social science isn't "hard" science. No, it isn't, but that doesn't make it useless.

I hear you cautioning us not to be too hopeful, but you can't deny us a little hope, can you? Even that pollsters are asking questions that reveal positive comparisons and that they are able to publish them is a step in the right direction in validating people's experience, isn't it?