You might recall that in a previous post I said I’d share Lavender magazine’s coverage of the December 2 Vigil for Solidarity with LGBT Catholics - an event that drew over 300 people to the front steps of the Cathedral of St. Paul.

Well, I've been a bit tardy, but here it is! As you’ll see, it was originally published in the December 21 issue of the magazine and is basically an interview with myself and Mary Lynn Murphy – two of the key organizers of the vigil.

The photos that accompany Lavender’s coverage were taken by the magazine’s photographer, Sophia Hantzes, while I’ve added the links within this reprinting of the article.

Vigil for Solidarity Protests New Archbishop
by E.B. Boatner
Lavender
December 21, 2007
“Those who actively encourage or promote homosexual acts or such activity within a homosexual lifestyle formally cooperate in a grave evil and, if they do so knowingly and willingly, are guilty of mortal sin.” 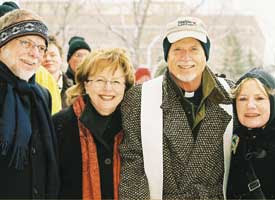 Above: Mary Lynn Murphy (right) stands with Phil and Randi Reitan
and Soulforce founder Rev. Mel White at the December 2
Vigil for Solidarity with LGBT Catholics.

Lavender interviewed Mary Lynn Murphy of Catholic Rainbow Parents and Michael J. Bayly of the Catholic Pastoral Committee on Sexual Minorities (CPCSM), after the Vigil for Solidarity at the Cathedral of St. Paul on December 2 protesting the Archbishop’s statement.

Mary Lynn Murphy: Nienstedt is the first Archbishop to specify that those who “encourage” GLBT relationships are themselves mortal sinners prohibited from communion.

Archbishop Nienstedt denies the authenticity of all reputable modern science on the subject, instead [supporting] a pseudo scientific organization called the National Association for Research and Treatment of Homosexuality (NARTH) that explains homosexuality as a treatable, reversible disorder, with childhood trauma at its roots.

Lavender: What impact do you feel he will have on the GLBT, Catholic, and general communities?

Mary Lynn Murphy: If he is consistent with his record, the Archbishop’s impact will probably be more negative and divisive than any archbishop in the history of this archdiocese.

There is an enormous amount of fear among even slightly liberal lay and religious employees of the Archdiocese; parish employees; teachers in Catholic grade schools, high schools, and colleges; and anyone whose livelihood and pensions are vaguely associated with the archdiocese.

Any time the most prominent religious leader in the community is this aggressive and outspoken, it can’t help influencing everyone to some degree, and will undoubtedly give justification to conservatives, and license to homophobes and haters of all kinds. 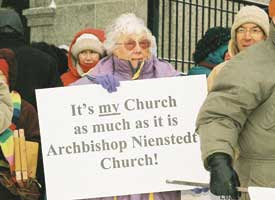 Lavender: What recourse does a practicing Catholic who does not agree with church policies have?

Mary Lynn Murphy: In the past, [they] could gravitate to liberal parishes. But now, the right wing is lashing back. Their scouts attend liberal churches on Sundays, and tape-record the homilies and photograph the interior of the church and/or the actual Mass for evidence of “liturgical abuses.” These are then shared via the Internet to foment outrage among conservatives. They’re also forwarded to the Archbishop and even to the Papal Nuncio in [Washington, DC].

Michael Bayly: Perhaps the healthiest recourse for progressive Catholics is to seek out Catholic groups like Dignity Twin Cities and CPCSM. We need to focus on being proactive, on being the change we long to see in the church.

Lavender: Do you see his appointment as indicative of a trend in US Catholicism?

Michael Bayly: It’s actually a global trend. There’s been a rise in fundamentalism in all of the major religions. We’re living through difficult and frightening times, and, unfortunately, the response of some religious people is to retreat into a fantasy world of absolute certainty, and deny the need to evolve and change. Archbishop Nienstedt advocates fundamentalism, pure and simple. It’s not Biblical fundamentalism, but doctrinal fundamentalism.

Lavender: Would you tell us a bit about the demonstration?

Mary Lynn Murphy: Despite the bitter cold and literally painful wind, the vigil was a huge, rousing success! Large numbers of religious persons attended, as well as lay people and significant numbers of GLBT family members.

We were banned from the Cathedral steps, so we got a permit to gather on Dayton Avenue next to the Cathedral. There were singing and drumming, and a very celebratory atmosphere. The most moving piece was a die-in and rising-up ritual that we conducted on the steps of the Cathedral, despite the ban. More than 100 people [of the 300+ in attendance] participated in this ritual. It was quiet, peaceful, and moving, lying there, staring up at the dissipating clouds and the day’s first glimpse of the sun.

First, to take issue with our new Archbishop about his nonpastoral and combative words regarding sexual orientation. His negative statements influence not only Catholics, but in one way or another, every citizen of Minnesota.

Secondly, to challenge the discriminatory Church teaching about homosexuality. Church teaching has been in error in the past…about the solar system, money-lending, its condemnation of democracy, its acceptance of slavery, its view of women as property, and others.

In light of our human experience, in accordance with all reputable modern science, and in the name of basic decency, we assert that homosexuality is not a disorder of any kind, but rather an ordinary human characteristic, with the exact moral dimensions of heterosexuality. This is not, we believe, and never was, a question of “sin.” It is a simple question of human diversity, and society’s ongoing struggle to learn to accept differences of all kinds.

Expressing sexuality and/or forming loving relationships is a basic human right. All of the condemnation by religious institutions cannot change that in a free and democratic society.

As parents, we lift up the voice of our parental authority on this matter, refusing to allow unloving, untrue messages (from any entity) to undermine our loving families, and the human dignity of GLBT persons everywhere—whether they are found in the pews, in the wider society, or, as they frequently are, in the ranks of the clergy and the hierarchy itself.

We hope the church will heed our message, and change its language and policy on this issue. 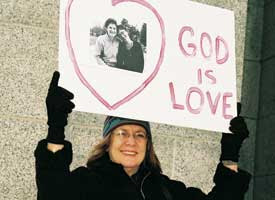