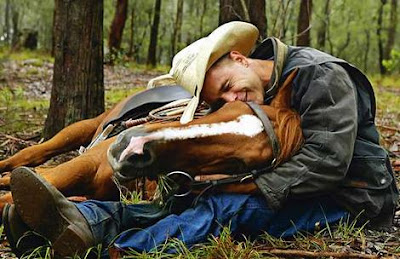 Sutton (pictured above) is often referred to in the Australian media as Ledger’s inspiration for his portrayal of gay ranch hand, Ennis Del Mar, in the award-winning film, Brokeback Mountain.

As journalist Neil McMahon noted in 2006: “It was the script that changed Heath Ledger’s life – and when he read Brokeback Mountain he knew he had a friend reflected in its pages. I’ve just read this script, Ledger later told his mate, Adam Sutton, and it sounds a lot like you. It was a film about a gay cowboy, and the actor was right; Sutton knew more than a bit about that.”

The two young men first met on the set of Ned Kelly. Ledger was playing the lead role of the famed Australian bushranger, while Sutton was working as a wrangler. They soon became fast friends. 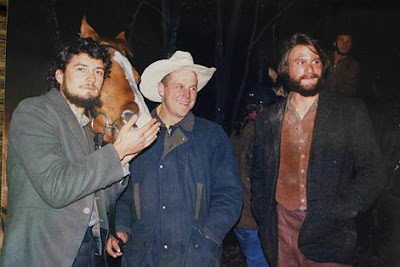 Above: Adam Sutton (centre) with Heath Ledger (right)
and Orlando Bloom (left) on the set of Ned Kelly.


Two years later, at the time of Brokeback Mountain’s release in Australia, Sutton was the subject of an installment of the TV program, Australian Story, and of a widely-read article in the Sydney Morning Herald by Neil McMahon entitled, Meet Heath’s Mate, the Real Gay Cowboy.

Following is a brief excerpt from that 2006 article:

“[Brokeback Mountain] put me at ease in a way,” says Sutton, a knockabout horseman from the Hunter Valley who was on set for part of the filming. “And I hope it puts a lot of people at ease, and takes the burden off a lot of country people’s shoulders – to know that they are not alone with that thought. It does happen. As tough as it is, it does happen.”

He’s talking about being a gay man, being in the bush and being alone – and not knowing what to do with any of it, an anguish Ledger captures in his painfully constricted performance.

Sutton cried watching it, as well he might. There was pain and anger on screen, aggression, and love embraced, then denied and nearly destroyed. He understands them all.

In his world – the world of cowboys and rodeos, of stereotypes scarred in the earth and not to be trampled on – you couldn’t be gay, and if you were, there was punishment. It could take the form of violence, of the kind that claims a character in the film, or it could be crippling self-hatred and denial.

Ledger died unexpectedly last Tuesday, January 22. His death is thought to have been caused by an accidental overdose of prescription drugs. Earlier this week, Sutton was in Los Angeles where “the media lined up to capture his recollections.” Following is that part of Neil McMahon and Gabriella Coslovich’s January 25 Sydney Morning Herald story that describes Sutton’s response to media questions about his friend, Heath Ledger.


Ledger, his friend Adam Sutton said this week, “didn’t want to be a blockbuster person. He was an actor, not a celebrity.”

To those who knew him, that fight between Heath the man and Heath the Star, with the capital letter, was always apparent, and it was a brawl Ledger did little to conceal from anyone. He hated it.

Sutton was in Los Angeles by accident, for the first time since he visited Ledger in 2004. This time, in the wake of unexpected tragedy, the entertainment media lined up to capture his recollections. Entertainment Tonight wanted his thoughts on sleeping pills and drug use; Access Hollywood wanted insights about Michelle Williams, Ledger’s former partner. They wanted to know only about Heath the Star. Ledger, the serious actor, seemed to have status only by dint of the torment it may have caused him.

But Sutton wanted to talk about Ledger the bloke, his mate, and Ledger the actor, who would sit about, a beer in hand, and engage his company by going in and out of whatever character he was immersed in at the time.

He wasn’t annoying, or being a smart-arse. He was just being Heath, fully involved in his script but also ever ready to crack wise, make a joke, draw a laugh from whoever was present. At the same time, the wall was up: he was guarded, Sutton says. You could never be quite sure what would come next or what he was thinking. There was Ledger the Unpredictable.

Ledger went to Hollywood not to seek fame, but to prove himself as an actor. He spoke once of his responsibility to investigate all the characters he was given, sounding as though he wanted to grasp the full range of humanity. The fact that he sought Hollywood because of his love of the craft may have made him all the more ill-equipped to deal with his consequent fame. For Ledger, fame and visibility were an unnecessary burden, not a means of boosting his marketability.

To read Neil McMahon and Gabriella Coslovich's story in its entirety, click here.