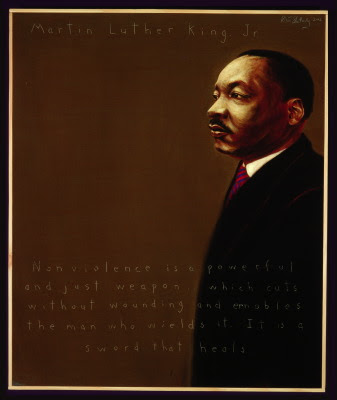 Following is an excerpt:

By taking on issues outside segregation, [such as poverty and U.S. militarism, King] lost the support of many newspapers and magazines, and his relationship with the White House suffered, said Harvard Sitkoff, a professor of history at the University of New Hampshire who has written a recently published book on King.

“He was considered by many to be a pariah,” Sitkoff said.

But he took on issues of poverty and militarism because he considered them vital “to make equality something real and not just racial brotherhood but equality in fact,” Sitkoff said.

Scholarly study of King hasn’t translated into the popular perception of him and the civil rights movement, said Richard Greenwald, professor of history at Drew University.

“We’re living increasingly in a culture of top 10 lists, of celebrity biopics which simplify the past as entertainment or mythology,” he said. “We lose a view on what real leadership is by compressing him down to one window.”

That does a disservice to both King and society, said Melissa Harris-Lacewell, professor of politics and African-American studies at Princeton University.

By freezing him at that point, by putting him on a pedestal of perfection that doesn’t acknowledge his complex views, “it makes it impossible both for us to find new leaders and for us to aspire to leadership,” Harris-Lacewell said.

To read Hajela’s article in its entirety, click here.

See also the previous Wild Reed post: Somewhere In Between

I, too, share this theologians pessimism when it comes to thinking the Roman church will change anytime soon. It won't! That is why I consider myself Old Catholic. The Catholicism I learned the church I grew up in as a child and young adult (Vat. II) has disappeared, and it is not coming back anytime soon.

A new Catholic Church has been created and Mother Angelica and EWTN helped to create what we now see in the church.

I am proud to proclaim that I am part of what is now the old Catholic faith, and I cannot (even if I wanted to) be part of this new Catholicism being proclaimed from the Roman pulpets.

I am compelled to quote (somewhat lengthy) from a priest and famous Notre Dame homilist (Pere Hyacinthe) who opposed the Vat. I doctrine of papal infallibility stating 150 years ago (and eventually excommunicated for this) that the Old Catholic movement is a real and justifiable Catholic movement because "the most permanent claim of the Old Catholic movement on our interest, is the witness which it has borne to the force of independent and honest conviction against tremendous odds. It is this open expression of dissent, this free and firm demand for reform...that constitutes the value, and that justifies the experiment, of such a reforming school the Church, wherever it may be, that is the scene of the struggle. Many doubtless in the Roman Catholic Church, both laity and clergy, hold the same opinions as the Old Catholics, but few have spoken; and whereas the reticence of the many is the canker and misery of the whole Church to which they belong, the utterance of the few is the sole condition of their remaining lawfully and with a good conscinece within the pale of a Church to which they can only adhere in the hope of eliminating its worse and developing its better elements." Pere Hyacinthe Loyson, "Catholic Reform: Letter, Fragments, Discourses," trans. Madame Hyacinthe Loyson (London: MacMillan and Co., 1874), 30-31.