A favourite blog of mine is Colleen Kochivar-Baker’s Enlightened Catholicism. On the eve of Barack Obama’s inauguration, Colleen has posted a beautiful reflection entitled, “Purification, Hope, and Closing Circles of Old Energy.”

Following is a brief excerpt: 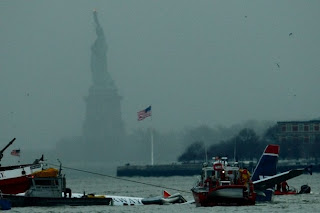 . . . I’ve thought quite a bit about the Miracle on the Hudson. The landing of a passenger jet on the Hudson river without a single loss of life is about as antithetical as one can get from the events of 9/11.

The pilot, Captain Chelsey Sullenberger, seemed to have two choices, downtown Manhattan (again) or try a belly landing on the Hudson. He chose the Hudson, acting from his competence, not panicked fear, and thereby spared all his passengers. He also spared any unsuspecting people who may have been in the plane's path had he tried the land approach. His choice is the exact opposite of the choices made by the 9/11 'pilots'. Captain Sullenberger purified some serious energy around Manhattan. He closed a circle of energy, an important circle of energy.

The photo which I chose for this piece, centers the Statue of Liberty in the background, as passengers are being rescued by the numerous commercial vessels which instantly surrounded the downed plane. Not one single person suffered exposure from the waters of the frigid Hudson. Amazing.

Lady Liberty watching over Americans, and those who aspire to be Americans, is also a Marian image.

There are other signs that things will be different in the energy of Obama . . .

To read Colleen’s reflection in its entirety, click here.


Of course, not all progressives are jubilant and hopeful about the incoming Obama administration. Patrick Martin, for instance, writing for the World Socialist Web Site, laments the cabinet assembled by the president-elect. According to Martin, it’s a right-wing cabinet for a government of big business. 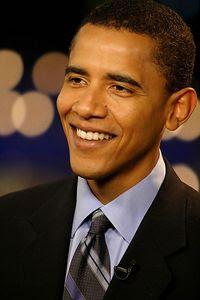 . . . In advance of his inauguration, President-elect Barack Obama has assembled a cabinet drawn from the upper echelons of American society and the right-wing of the Democratic Party. Despite his invocations of “change,” his appeals to antiwar sentiment and to young people in the course of nearly two years of campaigning, there is not a single figure in the leading personnel of the Obama administration drawn from the more liberal elements of the Democratic Party, let alone anyone representative of the broad masses of working people and youth. The right-wing character of Obama’s nominees is described by the media under the approving labels of “centrist,” “moderate,” and — most of all — “pragmatic.” This terminology signifies that the incoming Obama team consists entirely of individuals who pass muster with the corporate-financial elite. There is not a whiff of genuine oppositional sentiment, let alone political radicalism, among the lot of them.

. . . As for Hillary Clinton, once the highest-profile target for demonization by the Republican right, her confirmation hearing was described in all media accounts as a love fest. Senators spent 45 minutes praising her before allowing the nominee to read her prepared statement. Senators who voted to remove her husband from office ten years ago ratified her nomination for secretary of state and sent it to the floor of the Senate where she will be confirmed within minutes of Obama’s official inauguration.

To read Patrick Martin’s commentary in its entirety, click here.

I wish President Obama much success and an internal compass for that which is just and right and good. I pray for him.

The country is in a very delicate and awkward spot. I am not overly impressed with his first "big bang" (i.e., the stimulus package). I do believe that with the private sector, from banks to factories to families on economic "lockdown mode," the government has to get things moving, but to be pouring so much money into yet more roads, etc. is discouraging. He talked about transformative government, blah, blah, blah. Wouldn't this the perfect time to pour the lion's share of these funds into rail roads? People are always griping about the country's terrible alternative transportation systems. Well, it's not going to get any more competitive until and unless a huge--and I mean ENORMOUS--amount of capital is put into it. As it looks now, this is Obama's way of paying off the highway lobby...which always seems to keep lots of employees on the public dole.

I'm willing to cut him initial slack with gay issues, but I have to say some initial signals have left me wondering, at the very least. DADT will "wait" until 2010, at the least, and DOMA, well, I think that one will not be addressed at all.

I understand how you have to prioritize, and the economy is the most pressing problem for all Americans...but gays have been waiting in the back of the bus for a long, long time...and I suspect we won't get what is due us unless we demand that it become front and center.