Remembering Heath - One Year On 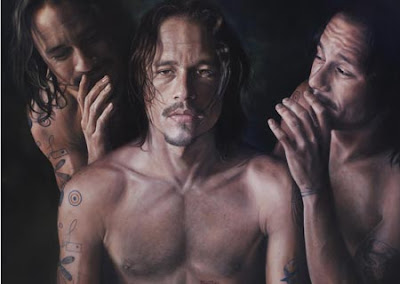 Today, January 22, is the first anniversary of Heath Ledger’s death. It’s a fitting time, therefore, to recollect how a portrait of the young actor by Vincent Fantauzzo was awarded the People’s Choice for last year’s prestigious Archibald Prize.


This year more than 32,000 people voted in the People’s Choice for the Archibald Prize and their favourite portrait by far was Vincent Fantauzzo’s portrait of Heath Ledger called Heath.

. . . The Ledger family, in particular Sally, Heath Ledger’s mother and Vincent Fantauzzo have jointly decided to donate this painting to the Art Gallery of New South Wales.

Born in Perth in 1979, Ledger’s many film credits include Brokeback Mountain, for which he scored an Academy Award nomination, I’m Not There, and Candy. He will be seen this year as the Joker in the new Batman movie, The Dark Knight.

Fantauzzo and Ledger were friends for around five years. “We had been planning to do a portrait for the last three years,” says the artist, “but the time was never right. Then late last year he gave me a call and said he was ready to do it and was really excited.”

They met at Ledger’s mother’s home in Perth and had a long discussion about ideas for the painting. “I wanted it to be dealing with self, your own consciousness and your thoughts,” says Fantauzzo. “An artist is their own biggest critic. I had seen his eyes wander off or stare into the camera while doing interviews and wondered what he may have been thinking. I felt that being a celebrity, you are always under constant scrutiny with so many demands made of you that you have to hold part of yourself back and not give too much away.”

The artist and Ledger had a couple of lengthy sittings. Ledger was relaxed and happy and they talked about his career. “After the sittings I felt so inspired,” says Fantauzzo, who flew home to Melbourne to finish the portrait. “I worked on it solidly for 10 or 12 hours a day. I’ve never worked so intensely or painted so obsessively. I was consumed by it.”

Born in England in 1977, Fantauzzo came to Australia as a child and has a Bachelor of Fine Art (Painting) and a Master of Fine Art from RMIT University, Melbourne. He has had solo exhibitions at Dianne Tanzer Gallery in Melbourne in 2007 and 2008 and in Mumbai India in 2007. He won the 2003 Tolarno RMIT Partnership Prize and was a finalist in the 2007 Shirley Hannan Portrait Prize, DLAP, Whyalla Art Award and Duke Gold Coast Art Prize.