Homosexuality in the Middle Ages 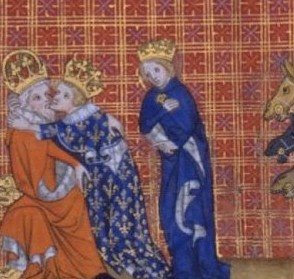 Yesterday I found an old copy of the Gay and Lesbian Review from 2006 amongst a box of my things in my parents’ garage.

I remember bringing this particular issue of the magazine with me from the U.S. when I was last in Australia. Evidently I left it here, which actually works out fine as now I can share from its pages an insightful review by George Klawitter of Ruth Mazo Karras’ book

Sexuality in Medieval Europe: Doing Unto Others. I must have planned to do just that back in 2006, as I’d bracketed in pen parts of Klawitter’s review.

So here, finally, are those excerpts from this review.

There are two schools of thought about same-sex sexuality in the Middle Ages: one says that people did it but didn’t like to label it, so we can’t call it “gay” sex; while the other says that it doesn’t matter what you call it, if in fact they did it. Ruth Mazo Karras is in the first group, and sets out in her new book, Sexuality in Medieval Europe, to show that gay sex as such did not exist because what men did to each other in those days was indifferent to gender and focused solely on active” versus “passive” roles.

This contrasts with the view of John Boswell – the original gay medievalist and author of the monumental book Christianity, Social Tolerance, and Homosexuality – who had no qualms about referring to some medieval men as “gay.” It was actually Foucault who really started the debate in the 1970’s when he asserted that the concept of a “homosexual” person didn’t enter the Western vocabulary until the 19th century and thus cannot be applied to the 14th century. For Boswell, this is like saying that Hamlet can’t be called “Oedipal” because he lived before Freud had invented the concept.

. . . Karras’ most elaborate handling of same-sex relations comes in a chapter titled “Men Outside of Marriage.” After explaining medieval attitudes on masculine privilege and dominance, she turns her attention to “sodomy,” a term, she notes, that was often used by Christians to stigmatize Muslims and heretics, and often used to label any non-procreative sex, which was ipso facto sinful. Church polemics against sodomy began in the 11th century and were codified in the 12th by the Third Lateran Council. But despite this condemnation, sodomy was never considered the practice of a specific subgroup or sexual minority; anyone could be a sodomite. Consequently, its threat to procreative sex was general: it was feared as a pervasive temptation. Karras singles out one exception. Late medieval Florence had a thriving homosexual subculture that anticipated the social and sexual scene of today’s gay ghettos. Karras’ explanation for the “Office of the Night,” an attempt by Florentine city fathers to expose sodomites, is especially clear and concise.

For Karras, sex between men before that 19th-century sociological turning point was not “gay” in any modern sense. Such a usage presupposes the existence of a “gay lifestyle” to provide a legitimizing context for same-sex activities. And yet, it seems to me this view plays into the hands of the Vatican and fanatics of the religious Right who dreamed up the concept of a “gay lifestyle” in the first place only so they’d have something to demonize.

Karras’ position implies that by fulfilling the religious Right’s dream of wiping out this “lifestyle,” it would be possible to eliminate “gay” sexuality itself. What we call “gay” would presumably return to the realm of “sodomy,” that vague, catch-all term used to entrap and humiliate and criminalize anyone whose sexual behavior you don’t happen to like or approve of. So while the behavior in question might be objectively the same, what some people see as a latter-day “lifestyle” was once punishable by death.

- Excerpted from “De-Sexing the Middle Ages” - a review by George Klawitter of Sexuality in Medieval Europe: Doing Unto Others by Ruth Mazo Karras (The Gay and Lesbian Review, May-June 2006).


See also the previous Wild Reed posts:
What is a “Lifestyle”?
The Blood-Soaked Thread