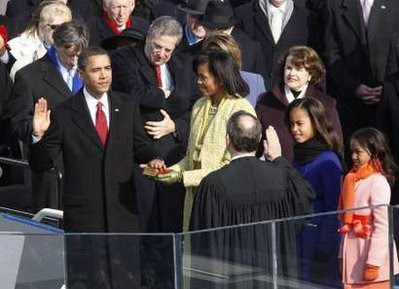 Earlier today in Australia (3:30 a.m. to be precise!), my nephew Liam and I roused ourselves from slumber to watch the live telecast of the January 20 (in the U.S.) swearing in of Barack Hussein Obama as the 44nd President of the United States of America. Obama is, of course, the first African American to hold this important and influential office.

I think Michael Fullilove of the Sydney Morning Herald said it best when he described Obama’s inaugural address as a “fine speech for an extraordinary historical moment.” Neither my nephew nor I regretted getting up at such an early hour to see history being made.

Following are those parts of President Obama’s inaugural address that most resonated with me. That we are in the midst of crisis is now well understood. Our nation is at war, against a far-reaching network of violence and hatred. Our economy is badly weakened, a consequence of greed and irresponsibility on the part of some, but also our collective failure to make hard choices and prepare the nation for a new age. Homes have been lost; jobs shed; businesses shuttered. Our health care is too costly; our schools fail too many; and each day brings further evidence that the ways we use energy strengthen our adversaries and threaten our planet.

These are the indicators of crisis, subject to data and statistics. Less measurable but no less profound is a sapping of confidence across our land – a nagging fear that America’s decline is inevitable, and that the next generation must lower its sights.

Today I say to you that the challenges we face are real. They are serious and they are many. They will not be met easily or in a short span of time. But know this, America – they will be met.

On this day, we gather because we have chosen hope over fear, unity of purpose over conflict and discord.

On this day, we come to proclaim an end to the petty grievances and false promises, the recriminations and worn out dogmas, that for far too long have strangled our politics.

We remain a young nation, but in the words of Scripture, the time has come to set aside childish things. The time has come to reaffirm our enduring spirit; to choose our better history; to carry forward that precious gift, that noble idea, passed on from generation to generation: the God-given promise that all are equal, all are free, and all deserve a chance to pursue their full measure of happiness.

. . . Now, there are some who question the scale of our ambitions – who suggest that our system cannot tolerate too many big plans. Their memories are short. For they have forgotten what this country has already done; what free men and women can achieve when imagination is joined to common purpose, and necessity to courage.

What the cynics fail to understand is that the ground has shifted beneath them – that the stale political arguments that have consumed us for so long no longer apply. The question we ask today is not whether our government is too big or too small, but whether it works – whether it helps families find jobs at a decent wage, care they can afford, a retirement that is dignified. Where the answer is yes, we intend to move forward. Where the answer is no, programs will end. And those of us who manage the public's dollars will be held to account - to spend wisely, reform bad habits, and do our business in the light of day – because only then can we restore the vital trust between a people and their government. 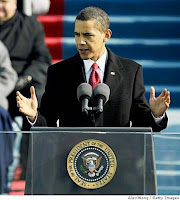 . . . As for our common defense, we reject as false the choice between our safety and our ideals. Our Founding Fathers, faced with perils we can scarcely imagine, drafted a charter to assure the rule of law and the rights of man, a charter expanded by the blood of generations. Those ideals still light the world, and we will not give them up for expedience’s sake. And so to all other peoples and governments who are watching today, from the grandest capitals to the small village where my father was born: know that America is a friend of each nation and every man, woman, and child who seeks a future of peace and dignity, and that we are ready to lead once more.

. . . [O]ur patchwork heritage is a strength, not a weakness. We are a nation of Christians and Muslims, Jews and Hindus – and non-believers. We are shaped by every language and culture, drawn from every end of this Earth; and because we have tasted the bitter swill of civil war and segregation, and emerged from that dark chapter stronger and more united, we cannot help but believe that the old hatreds shall someday pass; that the lines of tribe shall soon dissolve; that as the world grows smaller, our common humanity shall reveal itself; and that America must play its role in ushering in a new era of peace.

. . . To the Muslim world, we seek a new way forward, based on mutual interest and mutual respect. To those leaders around the globe who seek to sow conflict, or blame their society’s ills on the West - know that your people will judge you on what you can build, not what you destroy. To those who cling to power through corruption and deceit and the silencing of dissent, know that you are on the wrong side of history; but that we will extend a hand if you are willing to unclench your fist. 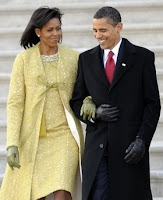 To the people of poor nations, we pledge to work alongside you to make your farms flourish and let clean waters flow; to nourish starved bodies and feed hungry minds. And to those nations like ours that enjoy relative plenty, we say we can no longer afford indifference to suffering outside our borders; nor can we consume the world’s resources without regard to effect. For the world has changed, and we must change with it. 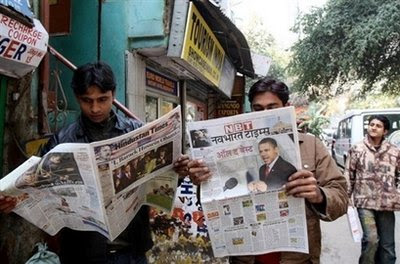 
Image 1: The 44th President of the United States, Barack Obama, takes the oath given by US. Supreme Chief Justice John Roberts, Jr. (lower right) during the inauguration ceremony in Washington, January 20, 2009. Daughters Malia and Sasha (R) look on, as Michelle Obama holds the Bible used by President Abraham Lincoln at his inauguration in 1861. (ReutersJim Bourg)

Image 4: US President Barack Obama walks with his wife Michelle as they depart the US Capitol Building after Obama was sworn in as the 44th President of the United States during the 56th Presidential Inauguration ceremony in Washington, January 20. Fashionistas hailed Michelle's choice of inauguration outfit, a sparkling golden dress and matching coat designed by Cuban-American designer Isabel Toledo. (AFP/Tannen Maury)