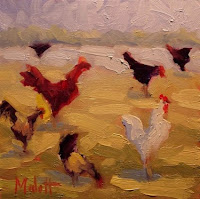 When I was a boy my grandfather, Valentine Sparkes, a veteran of both World Wars and a writer, penned and submitted for publication a short story about me and one of his fowls - a white rooster.


Although I was only three at the time, I have retained fragmentary memories of this rooster and the kinship we shared. I definitely remember engaging in the poignant conversation with my grandfather that he writes about at the end of his story.


The White Rooster
By Valentine Sparkes 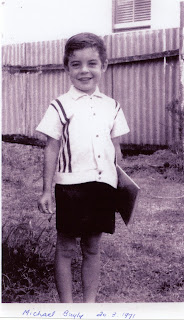 My grandson, Michael, was an outdoor boy, and was fascinated by my fowls, especially the white rooster. He was three-years-old, big brown eyes, and brown body. Dressed in shorts, shirtless, he was a familiar sight as he solemnly stalked the rooster round and round the yard.

Sometimes we would call, “Look out! He might bite you.”

He would shake his head, look up, then continue his stalking.

Came a time when the rooster died. We wondered how Michael was going to take the loss of his favourite. Next day his mother left him with us. His first concern was, as he pronounced it, “the white woo woo.”

“He died, Michael. He’s gone up there,” pointing to the sky.

His sad eyes looked up at me, and he said slowly, “What for, Pop? Why?”

Eventually we got another white rooster, but a little bigger. When I took Michael to see him, he shook his head and said, “Too big!”

His questioning eyes looked at me as he asked, “Where white woo woo?” 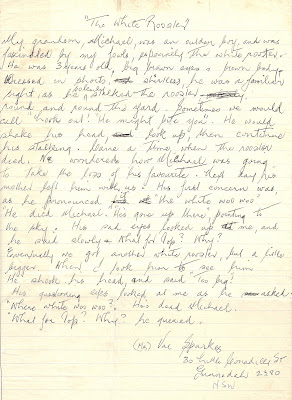 I have another vivid memory of “Poppy Sparkes”: When I was probably about the same age as in the story of the white rooster, I remember playing in a wheel barrow in my grandparents’ backyard. I was rocking it from side to side and, not surprisingly, it tipped. I landed in a patch of stinging nettles. I ran screaming and crying inside where my grandfather, sitting in his armchair, gathered me into his arms and held me until the pain and tears went away.


Opening Image: H. Malott.
Image 2: A photo, dated March, 20, 1971, that shows me in the backyard of my maternal grandparents Val and Olive Sparkes of Gunnedah, N.S.W., Australia.
Image 3: My grandfather, “Poppy Sparkes,” pictured in 1959 at my parents’ wedding. He probably wrote “The White Rooster” in 1969 when I was three years old (the handwritten copy of the story is undated but a reference is made to my age). He died in 1971 at the age of 81.

This is a lovely story.

You knew the right questions, even at three, Michael. Thanks for that memory.

Thanks. That reminded me of my grandfather who was in both wars too.