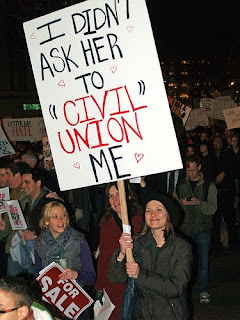 As most people probably already know, the California Supreme Court recently voted to uphold Proposition 8, a ballot measure that bans gay marriage. The measure, which defines marriage as solely between a man and a woman, was approved by 52 percent of California voters last November as an amendment to the State Constitution. Yesterday, the court voted 6-to-1 to uphold the measure and rejected lawsuits that argued Proposition 8 was not simply a constitutional amendment, but a constitutional revision, which requires the legislature’s approval.

Chief Justice Ronald George noted in his majority opinion that Proposition 8 still guarantees same-sex couples the right to civil unions and, “carves out a narrow and limited exception” by “reserving the official designation of the term ‘marriage’ for the union of opposite-sex couples.”

Interestingly, the court’s decision does preserve the 18,000 same-sex marriages that took place last year during the few months that gay marriage was legal in California. Gay marriage was permitted by a 4-to-3 decision from the California Supreme Court last May and then barred after the passage of Prop 8 in November.

Bryan Wildenthal (pictured at left) is the first openly gay law professor at Thomas Jefferson School of Law. He and his partner were married in California last July. Earlier today he spoke with Amy Goodman of Democracy Now! about the California Supreme Court’s decision to uphold Proposition 8.

And in what can only be described as a disappointing failure of nerve, the California Supreme Court ruled 6-to-1 that, yes, by a simple majority vote through the amendment process, you could strip away those rights, it did not require revision. They could have thrown it out, by saying that you have to do a revision. A revision requires a two-thirds vote of the state legislature, and only then would it go to the voters. By saying they can do it through an amendment, they are saying that a proposition based on petitions, signed by a mere eight percent of the voters and then a mere fifty-percent-plus-one approval, can strip away a fundamental state constitutional right. So, it’s a mixed bag with the California Supreme Court.

Justice Carlos Moreno, the sole dissenter from this decision, says this decision doesn’t just affect gay couples; it threatens equal protection and equal rights for any minority group, which in California, under our law, they are now at risk, any minority group—Mormons, Latinos, African Americans. Anyone whom the majority might disagree with can now have their rights stripped away, and that’s valid, simply as an amendment. You don’t have to do a revision.


As to where the gay rights movement in California goes now, given the fact that in other parts of the country more and more states are moving to legalize gay marriage, Wildenthal says:

I think we have to go back to the voters, go back to the political process. The court, as I said, it’s a mixed bag. I think we’ve exhausted what can be achieved in the California courts. Very few people — and as a legal expert, as a constitutional law professor who studies the US Supreme Court, that’s not going to be an avenue that’s going to work under current membership of the court and under current doctrine.

So, I think we in the gay community and with our friends and supporters throughout the society have to go back to the voters and have a conversation and say, “Is it right? Should someone be denied a civil legal right, simply because some people may disagree with it or disapprove of it?” That’s not right. You know, we all—as a civilized society, need to live together, we have to respect the rights of our fellow citizens to have basic rights, regardless of whether we might agree with or disapprove of their marriages or their families. 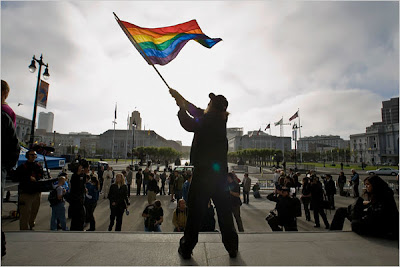 See also the previous Wild Reed posts:
Maine Becomes Fifth State to Allow Same-Sex Marriage
Frank Rich on the “Historic Turning Point in the Demise of America’s Anti-Gay Movement”
The Same Premise
Love and Justice in the Heartland
The Real Sodomites: Proponents of Proposition 8
Unrest in California Over Passing of Proposition 8
Reflections on the Passage of Proposition 8

"Marriage," as distinct from "pair-bonding," is the Roman Catholic Church's version of "pair bonding," and it is quite clear as the holder of the title, that only a male and female may marry, and according to the People of California, under the influence of the California Catholic Bishop's and their request for aid and support of Utah's Church of Jesus Christ of Latter Day Saints, they persuaded California voters to vote for their version of marriage. Unless you oppose a liberal democracy, unless you reject your church's hierarchs, the Church won.

It may be queer that Mormons were brought in by the Catholic bishops to do all the leg work and provide the funds (paying pedophile claims has the bishops a little tight on cash), since Mormon scripture attests to polyandry, not monandry, but their collusion was financially successful, even though the opinion polls favor the California Supreme Court Decision of 15 May 08, even though the Gov. and Mrs. Schwarzenegger supported the Court's decision, and even though candidate Obama, who opposes same-sex marriage, supported the Court's decision, and even though every major newspaper and news desk supported the California Court Decision, the well-heeled Mormons in California and from Utah, with the time and money at the behest of the California bishops, went door to door throughout the Central Valley, throughout the non-coastal towns, and replayed nothing more than Mayor Gavin Newsom's "Whether You Like It Or Not" speech to his fascist supporters for acting unilaterally, undemocratically, and against his mentor's wishes, scared the sh*t out of California voters, so that people were not voting to keep marriage between a man and a woman, but to keep the fascist mayor and his threats at bay. He is, after all, a fellow Roman Catholic, however lapsed, divorced, drunken, and porn-addicted.

But I bet if you saw Michele Bachmann threatening you with "Whether you like it or not," and the fair minded people of MN did NOT like it, they'd vote against her. Mayor Newsom was all it took, in all his stupid wonder, saying something Michele Bachmann might say, but whoever says it, scares fair-minded people to vote against them. Apparently, fascist tendencies of Hitler, Mussolini, and Franco carry over to San Francisco's own fascist mayor Newsom. Some people like him for it. I'm not one of them.