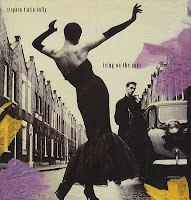 For tonight’s “Friday Music Night” treat I present British popster Stephen “Tin Tin” Duffy’s “Icing on the Cake.” (I guess that would be “Frosting on the Cake” for you Americans out there!)

One good thing about growing up in Australia during that golden age of pop music known as the ’80s was that we got the best of American pop music, the best of the British (obviously because of our historical/cultural ties), and, of course, the best of our own great homegrown musical talent. I'm not sure that a range like that, at least back then, would have been experienced by your average teenager in the U.S. I mean, I doubt that Duffy’s “Icing on the Cake” was even heard of here. For one thing, it’s too British (read: overtly queer*), especially in terms of Duffy’s appearance, deportment, and delivery. (This is ironic as Duffy is actually straight. Then again, one certainly doesn’t have to be gay to be queer - just ask the makers of the new Superman!).

Anyway, Nouveauxdecadence, who posted this particular music video on YouTube, notes that 1985’s “Icing on the Cake” was Duffy’s follow-up single to his massive hit “Kiss Me.” “Icing on the Cake,” however, is “Stephen’s most glorious pop moment,” complete with an “absolutely fantastic video and such a sweet melody.” You get no argument from me! The only thing I’d add is that it’s also such a “glorious pop moment” because it taps into that queer sensibility of all great pop.**

So, friends, here for your listening (and viewing) pleasure is Stephen “Tin Tin” Duffy with “Icing on the Cake.” Enjoy!

It just so happens that I came across a collection of Pierre et Gilles images this afternoon in a Minneapolis bookstore. These highly stylized and, well, campy photographs reminded me of the music video for “Icing on the Cake” - while the subject matter of many of them brought to mind the song’s wistful lyrics. 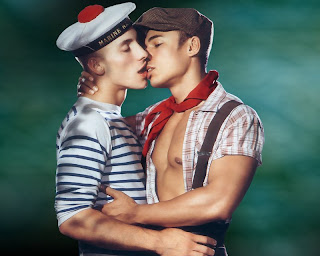 . . . I want to live with you
Want to sleep with you
In a house, in a peaceful world
They want to take you
They want to break you
Don’t let them make you unhappy

. . . I always saw you as a fighter and a winner
Not content to only write your name
Their right way is the wrong way for what you are
And what you were born to be

Here we come waltzing home
By the moon so bright
By the sea, by the harbour wall
They want to take you
They want to break you
Shape you and make you unhappy

* As I’ve noted in a previous post, to be queer is to be open and willing to go beyond (in thought, word or deed) the parameters of gender, race, heterosexality, patriarchy, and other socially-constructed (or manipulated) concepts.

** Music critic Charles Taylor has insightfully noted that “great pop songs” are, in part, songs that “offer up scenarios of happiness or heartbreak so lush and accessible that they can make us want more from life than we have, and then question why we don’t have it.”

what a great post! A wonderful dive into pop music and queer sensibilities.