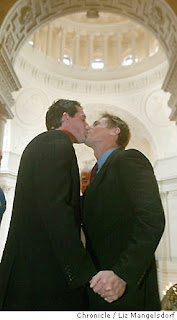 As usual, opponents of gay marriage cited the erroneous charge that allowing same-gender civil marriage would force churches to perform sacramental marriages for gay people. Wrong. Churches have always been free – and will remain free – to determine whom they will and will not marry.

Of course, this type of false charge from gay marriage opponents is similar to the one that says that any type of hate crimes bill will mean that churches will no longer (that’s if they did at all!) be able to preach against homosexuality. Wrong, again.

The bill has been crafted in a fashion that fully protects first amendment and other constitutional rights. The bill is designed only to punish violent acts, not beliefs or thoughts -- even violent thoughts. The legislation does not punish, nor prohibit in any way, name-calling, verbal abuse, or expressions of hatred toward any group, even if such statements are hateful. Moreover, nothing in this legislation prohibits the lawful expression of one's deeply held religious or personal beliefs. The bill only covers violent actions that result in death or bodily injury committed because the victim has one of the specified actual or perceived characteristics.

So there you have it: those churches (or elements within churches) that name-call, verbally abuse and/or express ignorance, fear, and/or hatred toward gay people can continue to do so - even as the rest of humanity (including Christians) moves ever beyond such things and into enlightenment, respect, and compassion around gay issues.

Well, now that we’ve cleared that up, here are some excerpts from an article by Glenn Adams of the Associated Press about the recent developments in Maine.

Maine’s governor signed a freshly passed bill Wednesday approving gay marriage, making it the fifth state to approve the practice and moving New England closer to allowing it throughout the region.

New Hampshire legislators were also poised to send a gay marriage bill to their governor, who hasn’t indicated whether he’ll sign it. If he does, Rhode Island would be the region’s sole holdout.

The Maine Senate voted 21-13, with one absent, for a bill that authorizes marriage between any two people rather than between one man and one woman, as state law currently allows. The House had passed the bill Tuesday.

Democratic Gov. John Baldacci, who hadn’t previously indicated how he would handle the bill, signed it shortly afterward. In the past, he said he opposed gay marriage but supported civil unions, which provide many benefits of marriage.

Republican Sen. Debra Plowman of Hampden argued that the bill was being passed “at the expense of the people of faith.” “You are making a decision that is not well-founded,” warned Plowman.

Maine is now the fourth state in New England, to allow same-sex marriages. Connecticut enacted a bill after being ordered to allow gay marriages by the courts, and Vermont passed a bill over the governor’s veto. Outside New England, Iowa is recognizing gay marriages on court orders. 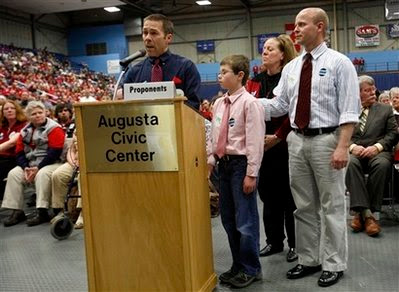 
UPDATE: Washington DC city council has voted to recognize same-sex marriages conducted in other US states. However, as Washington DC is not a state, the decision will now have to be approved by Congress before it can become law.

According to the BBC:

Council member David A Catania - one of two openly gay members of the body - explained his reasons for supporting the measure during the debate.

“This issue is whether or not our colleagues on a personal level view me and [Council member] Jim Graham as your equals,” he said.

“If we are permitted the same rights and responsibilities and obligations as our colleagues. So this is personal. This is acknowledging our families as much as we acknowledge you.”

Fellow council member, and former Washington DC Mayor Marion Barry, was the only member to vote against the proposal.

See also the previous Wild Reed post:
Love and Justice in the Heartland

How wonderful! This world needs more gay people and couples. They are such beautiful people. Canada and other European countries who have approved gay marriage are so in tune with the times. GREAT GREAT news!