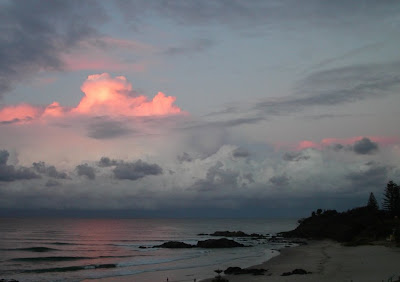 Since I’m currently living by the sea, I thought I’d share a tale or two from the anthology Great Sea Stories of the World (Chancellor Press, 1990).

That year many of the fishers of Saint-Valéry had been drowned at sea. Their bodies were found on the beach cast up by the waves with the wreckage of their boats; and for nine days, up the steep road leading to the church were to be seen coffins borne by hand and followed by widows, who were weeping beneath their great black-hooded cloaks, like women in the Bible.

Thus were the skipper Jean Lenoël and his son Désiré laid in the great nave, beneath the vaulted roof from which they had once hung a ship in full rigging as an offering to Our Lady. They were righteous men and God-fearing. Monsieur Guillaume Truphème, a priest of Saint-Valéry, having pronounced the Absolution, said in a tearful voice:

“Never were laid in consecrated ground, there to await the judgment of God, better men and better Christians than Jean Lenoël and his son Désiré.”

And while barques and their shippers perished near the coast, in the high seas great vessels foundered. Not a day passed that the ocean did not bring in some flotsam of wreak. Now one morning some children who were steering a boat saw a figure lying on the sea. It was a figure of Jesus Christ, life size, carved in wood, painted in natural colouring, and looking as if it were very old. The Good Lord was floating upon the sea with arms outstretched. The children towed the figure ashore and brought it up into Saint-Valéry. The head was encircled with the crown of thorns. The feet and hands were pierced. But the nails were missing as well as the cross. The arms were still outstretched ready for sacrifice and blessing, just as he appeared to Joseph of Arimathea and the holy women when they were burying him.

The children gave it to Monsieur le Curé Truphème, who said to them: “This image of the saviour is of ancient workmanship. He who made it must have died long ago. Although today in the shops of Amiens and Paris excellent statues are sold for a hundred francs and more, we must admit that the earlier sculptors were not without merit. But what delights me most is the thought that if Jesus Christ be thus come with open arms to Saint-Valéry, it is in order to bless the parish, which has been so cruelly tried, and in order to announce that He has compassion on the poor folk who go a-fishing at the risk of their lives. He is the God who walked upon the sea and blessed the nets of Cephas.”

And Monsieur le Curé Truphème, having had the Christ placed in the church on the cloth of the high altar, went off to order from the carpenter Lemerre a beautiful cross of oak.

When it was made, the Saviour was nailed to it with brand new nails, and it was erected in the nave above the churchwarden’s pew.

Then it was noticed that His eyes were filled with mercy and seemed to glisten with tears of heavenly pity. One of the churchwardens, who was present at the putting up of the crucifix, fancied he saw tears streaming down the divine face.

The next morning when Monsieur le Curé with a choir boy entered the church to say his mass, he was astonished to find the cross above the churchwarden’s pew empty and the Christ lying upon the altar.